The principal of T John College in Bengaluru, Tiwari does not believe in hierarchy, but in self-discipline 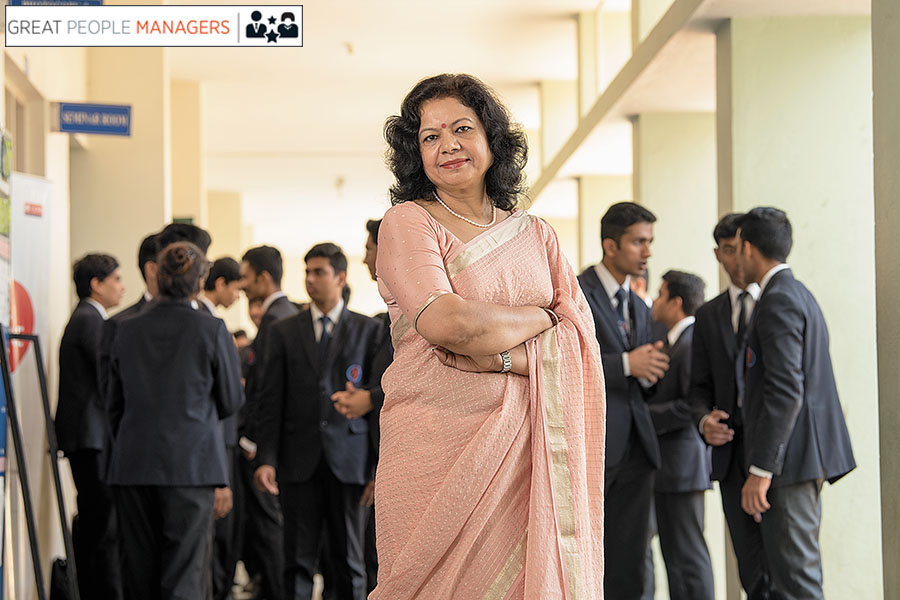 Shikha Tiwari, 56, had two early influencers in life. The first was her late doctor-father, who in the conservative small town of Lakur in Uttar Pradesh, taught his five children the power of progressive thinking. He encouraged his wife’s passion for learning which led to her earning a master’s degree in history instead of being content with studying up to class 10 at the time of their marriage.

“He felt that if the mother is educated, the children will pick up the same attitude,” says Tiwari. Many childhood evenings, she recalls, were spent learning about world affairs and great leaders from their father.

The second was her college professor who encouraged her and helped her find accommodation close to the institute so that she could pursue her master’s degree in Sanskrit. Tiwari eventually earned a second master’s degree and a PhD in Hindi.

Tiwari’s marriage, immediately after completing her studies, brought her to Bengaluru, where her software engineer husband was working. She devoted the initial years of her married life to family, but when her children grew up, she pursued her passion for teaching and discovered that she “had a knack for administration”.

From a faculty member’s position in 2002, Tiwari became principal of T John College in Bengaluru a decade later. Under her leadership, the college got an A grade accreditation from the National Assessment and Accreditation Council that rates colleges and universities in India. T John has about 1,600 students and offers three master’s and six undergraduate degree courses. 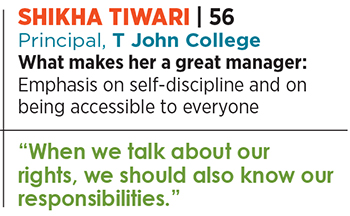 She credits her success to her ability to dispense with hierarchy and be accessible to everyone, be it a student, a non-teaching staff or a senior professor.

However, if there is one thing that she would want her students to imbibe as a life lesson from her, it would be discipline. “Not hard discipline for the sake of discipline but self-discipline, which teaches us to project the right attitude for every situation, every occasion,” she says.

“When we talk about our rights, we should also know our responsibilities,” says Tiwari. “[Lack of] discipline is the biggest problem of our country. We aren’t disciplined… that’s why we are facing so many problems, that’s why we indulge in corruption, that’s why we aren’t growing in the manner we are supposed to grow.”

Tweets by @forbesindia
The concept of a leader who knows it all is redundant: Paddy Upton
Is Jack Dorsey Silicon Valley's biggest wellness influencer?