Kalyan Jewellers: From a textile store to a jewellery chain

A business that began from a single store in Thrissur, Kerala, has now crossed the seas and attracted big PE investment 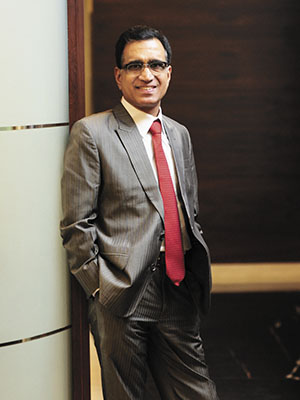 TS Kalyanaraman, chairman and managing director of Kalyan Jewellers, was not exactly born with a silver spoon in his mouth. The only business asset he inherited from his father, TK Seetharam Iyer, was a textile store in Kerala’s Thrissur district. Starting out as an apparel store in the ’90s, Kalyan’s entrepreneurial journey has made it one of India’s largest jewellery chains.

The shift to jewellery from textile was triggered by customers. “A lot of our customers did their wedding shopping from our textile store. At one point, some of them suggested we start a jewellery showroom, too. By then, my family had earned the trust of a lot of customers, while in jewellery retail there was no standard for purity,” recounts Kalyanaraman. Inspired by his customers’ goodwill, he opened his first jewellery store, Kalyan Jewellers, in 1993, in Thrissur, and redefined the way ornaments were sold.

At 4,000 square feet, the store was about 10 times the size of an average jeweller back then. But, more importantly, it stocked readymade ornaments. “In the early ’90s, jewellery was a made-to-order business. Since I began in the textile business, I asked myself: ‘If a shirt or a saree can be sold readymade, why not jewellery?’” says Kalyanaraman.

The retailer operated just that one store for the next seven years. But by 2011, Kalyan Jewellers was in every major South Indian city, with the exception of Chennai. “For Chennai, I wanted to do what I had done in 1993—the store had to be done in a certain style and scale,” says Kalyanaraman. In April this year, Kalyan finally opened a store in the southern metropolis. Spread across 40,000 square feet, the showroom stocks about 600 kg of jewellery at any point and registers a footfall of 700 on weekdays and 1,200 on weekends. Kalyanaraman claims it is the largest jewellery store in Asia, adding that Chennai is touted to be the world’s biggest jewellery market.

Kalyan Jewellers operates 72 retail stores in India and 13 abroad (ten in the United Arab Emirates and three in Kuwait) and has set a target to scale this up to 100 by the end of next March. The company also has plans to open six stores in Qatar by the end of this financial year.

The person behind it
Kalyanaraman comes from a family of priests and ministers of the maharajas. “My great grandfather, TR Ramachandra Iyer, was the first to enter business in our family when he started a textile mill [Sitaram Mills] in 1908 in Thrissur,” says Kalyanaraman. Sitaram Mills was subsequently acquired by the state government and continues to operate in Thrissur.

Kalyanaraman, who has a bachelor’s degree in commerce from the University of Calicut, never dreamt that Kalyan Jewellers would grow beyond his hometown. But, given that his father had set up five textile stores for each of his five sons, Kalyanaraman decided to adopt the same approach for his two sons. Thus, in 2000, he opened a second store in Palghat, 70 km from Thrissur. “It was a milestone for me. I wanted to start a second showroom and put my younger son there,” he recalls. 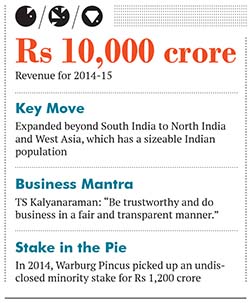 Why it is a gem
In FY15, Kalyan Jewellers reported about Rs 10,000 crore in revenue, up 18 percent from Rs 8,500 crore the previous fiscal. It expects to clock 30 percent growth in the current financial year. With 85 stores, Kalyan Jewellers’ revenue is ahead of the country’s biggest listed jeweller, Titan Company, a Tata Group firm, that operates more than 200 retail stores under two brand names, Tanishq and Goldplus. Titan Company’s jewellery business notched revenues of Rs 9,429.97 crore in FY15, according to its latest annual report.

“Kalyan has been the most innovative company in the jewellery industry for years. They have ambitions, immense understanding and a passion for their business. When combined with their integrity and transparency, they have a real opportunity to build the best jewellery company in India,” says Vishal Mahadevia, MD and co-head, India, Warburg Pincus, a global private equity firm that has $39 billion in assets under management.

Last year, Warburg Pincus picked up an undisclosed minority stake in Kalyan Jewellers for Rs 1,200 crore. The deal was the largest PE investment in the jewellery industry in India. Over the next four years, Kalyan Jewellers aims to cross the Rs 25,000-crore revenue mark, which translates to a CAGR of over 35 percent.

Why it was hidden
The story of Kalyan Jewellers has for the longest time been restricted to South India. In 2012, it became the only Indian company to rope in Bollywood actors Amitabh Bachchan and Aishwarya Rai Bachchan together as national brand ambassadors. It was only after the Bachchans came on board that Kalyan Jewellers received national visibility. That year, they opened four stores in Gujarat, their first foray outside South India. This was followed by a rush of store launches in Maharashtra, Punjab and Delhi. In 2013, the company expanded to the UAE, opening six stores in one day. This year, the jeweller is expanding its operations to West Bengal and Rajasthan.

Risks and challenges
Despite his success, Kalyanaraman is a worried man. “I enjoy competition as it makes you work better and keeps you alert. But, unhealthy competition is a different ball game,” he says. The over $40-billion Indian gems and jewellery industry is still a far cry from modernisation, as organised retail accounts for only about one-fifth of the industry. With local unbranded retailers, unhealthy trade practices such as impurity of products are still rampant.

“The only advice that my father gave me was: Be trustworthy and do business in a fair and transparent manner,” he says. Today, close to 90 percent of sales for Kalyan Jewellers, especially at stores that are over three years old, are from repeat customers. The jeweller’s eight-year-old loyalty programme already has 2.8 million customers. They are, clearly, doing something right.