A Brave Comeback For Bahadur?

After more than two decades, Abid Surti is reviving his comic book superhero through the silver screen

It is said that Chambal is the valley where the lions breed.’ This is the opening line from The Red Brick House, the first Bahadur comic which was released by Indrajal comics on December 1, 1976. The comic was an instant hit during those days because it was a realistic portrayal of the situation in India. The presence of dacoits, the absence of individuality and the general atmosphere of the country was ripe for the birth of a superhero. Abid Surti did that with style. He created Bahadur, the reformed son of a dacoit, who initially wants to avenge the death of his father, but eventually converts; sides with the police to fight evil for the rest of his life.

Surti is reviving the comic hero in an upcoming movie which is now being finalised and will get into pre-production next year. The movie will be directed by Sadanand Kabir whose earlier movies include Tum Milo Toh Sahi and Popcorn Khao. Surti also has plans to get his hero back into comic books.

During the eighties, Bahadur had managed to beat the popularity of Phantom, Mandrake, Flash Gordon and Tarzan and he hopes to do that one more time. The Bahadur comics continued till 1990 under different authors and came to an end when Bennett, Coleman & Co stopped publishing Indrajal comics. Top Bollywood personalities like Shah Rukh Khan were interested in making a film based on Bahadur, but there were copyright issues regarding the ownership of the character. “Those issues are taken care of. Now it is clear that the character of Bahadur and its rights belong to me and nobody else,” says Surti who, at the age of 76, is keen on seeing his comic book hero on celluloid.

Not many people are aware that Bahadur was in a live-in relationship with Bela who was an expert in martial arts. For a character that peaked in the early eighties, this relationship was very forward looking. Surti feels that the generation of those years was more open to new ideas unlike the generation of today which he feels is conservative. Bahadur dressed in a saffron kurta, to indicate the colour of sacrifice, and wore jeans which was a sign of modernism.

Now the characters will be going through a major revamp because India itself has changed and Bahadur will have to fight for new causes that affect people today. But that ideally should not be a challenge for Surti. He grew up in Dongri which has been a den for criminals for years. It was here that he observed some of his closest friends take to crime while he struggled to become an artist and joined the JJ School of Arts.

Dongri was an area which was inhabited by smugglers and small-time crooks who used to visit Surti’s uncle, a well-known personality who was known for his social service toward the downtrodden. Surti’s place was an abode to people like constable Ibrahim, father of Dawood, the notorious criminal who is now wanted by Interpol. Even now Surti has not come to terms with the fact that someone as honest as Ibrahim ended up having a son who became a terrorist. It is this dichotomy of two personalities from the same background, who end up doing opposite things, which has been traced in Surti’s work. Thus, Bahadur, the son of a well-known dacoit Bhairav Singh, ended up becoming a vigilante who fights against evil.

Surti visited this theme of dichotomy again when he wrote his semi-autobiographical novel, Sufi. The novel is about two friends who grow up in the violent background of Dongri. Iqbal Rupani, the pious one ends up becoming a gangster, while the other becomes a writer. The book is now being made into a film.

But Surti’s stories have always faced hurdles when it came to turning them into movies. Earlier Raj Kapoor wanted to make a film on Inspector Azaad another character created by Surti. Kapoor died before the film could get into production. 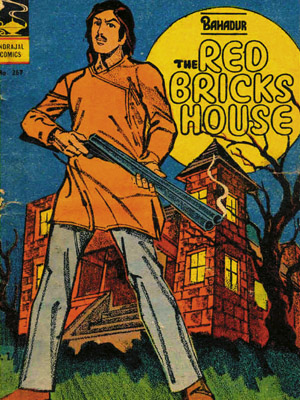 Surti, who himself has worked in the film industry as a script writer, feels that comics are just like movies. His experience in the industry helped him to master the art of comic book writing. “Bahadur comics are actually like movies. Every frame has been carefully thought about with camera angles in mind. Surti had written those stories like a screenplay and that is why many people want to make movies out of these comics,” says Alok Sharma, who made Chitrakatha, a documentary on Indian comic book writers. He feels that Surti is one of the few writers who is comfortable writing novels, comic books and children’s books.

International comic book writers are like rockstars. Surti is the only comic book writer in India who has achieved this status. At a recent convention, people waited for more than four hours to hear him speak. Many fans had brought copies of their 35-year-old Bahadur comics to be signed by Surti.

When Surti is not writing, he is busy with his NGO called Drop Dead, where he visits apartments on Mira Road in Mumbai to fix dripping taps. He is a big believer in water conservation. In the Bahadur stories, people in Chambal have faced water scarcity for a long time. And like his Bahadur stories, this is the reality of many places in India.