Rubik's Cube has fascinated, intrigued and tormented us for 30 years 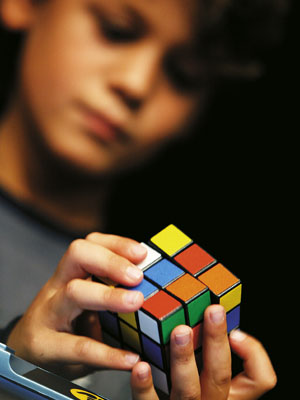 Aamir Khan can do it in 36 seconds. Will Smith takes a bit longer, about 55 seconds. Once they are done though, they have never felt as ecstatic as Graham Parker did, who took 26 years to complete the act.

Thirty years after Erno Rubik let loose his creation on the world, the Cube continues to be one of the best-selling toys of all time. More than 300 million pieces have sold worldwide and that’s only the stuff Ideal Toy Corporation, the company that licensed the toy know-how from Erno Rubik, sold. Rubik invented what he called the Magic Cube to teach 3D geometry to his students. He would not have imagined that the Cube would enter into popular culture as a visual cue for intelligence. Movies such as 3 Idiots, Pursuit of Happyness and My Name is Khan have deployed the trusted Cube to imbue the character using it with that aura.

Erno Rubik’s invention was destined to become something more potent. The Cube fever was almost instantaneous and pervasive. Soon after the toy was released in 1980, anyone with grey matter owned a cube. Buying it was only the beginning. To most people the cube was torturous. Getting one face of the cube in one colour was easy. After that it was all downhill.

The cube isn’t a puzzle you can solve through trial and error. The standard ‘3x3x3’ Cube has six coloured sides, 21 pieces and 54 outer surfaces. This leads to more than 43 quintillion possible configurations, or 43,252,003,274,489,856,000 to be exact. But there is only one solution. If you take a second for every configuration, it would still take 1,400 trillion years to try out all the configurations. The best in the business can solve it in 25-40 moves.

The interesting thing is that the Cube has remained popular even though the first published solution became available as early as 1981. Patrick Bossert, who was 13 then, wrote You Can Do the Cube. He simply put down the method he used a year earlier to solve the cube. The book became the fastest selling book in history since the publication of Lady Chatterley’s Lover. It was later out-sold by no less than J.K. Rowling’s Harry Potter series. In all, the book sold 1.5 million copies world-wide in 17 editions, and ranked as Number One on the London Times and New York Times bestseller lists for all of 1981. Given that so many people bought the book and “knew” how to solve the Cube, it still remained challenging. And that’s because unless you memorise the steps, even a simple variation in the approach can lead to a different path to the solution.

Cube enthusiasts test each other in competitions and the world record now stands at under 10 seconds; the same time it takes for Usain Bolt to race 100 metres. Given the fact that no other interesting puzzle seems to be in the race, it is fair to say that the Cube will continue topping the popularity charts.

Tweets by @forbesindia
Book: How Starbucks Changed the World
Fight Traffic From The Comfort of Your Car