Moving Toward A Doomsday Weapon? 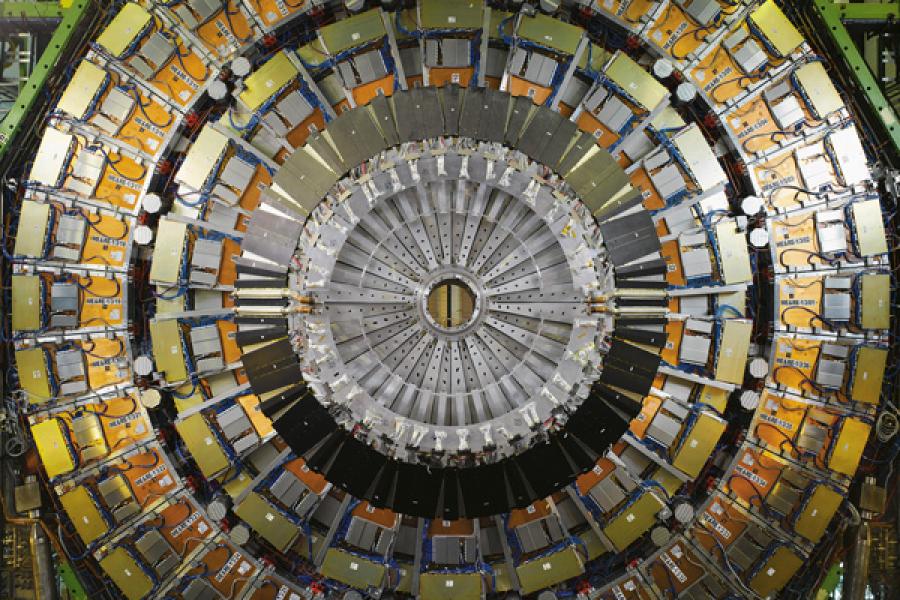 Image: James Brittain/ Corbis
BREAKTHROUGH The large hadron collider at CERN, Geneva. Breaking the speed-of-light barrier will lead to fundamental revisions in scientific theory. These in turn will produce new processes, some of which will inevitably have military applications

Six months ago CERN (the European Organisation for Nuclear Research) announced the results of a project that fired neutrinos through the Alps from Geneva, Switzerland to Gran Sasso, Italy, achieving a speed a fraction of a second over the speed of light. The verification process that has taken place since has convinced many scientists that the finding is accurate. If this proves to be so, we’ll have to rewrite the laws of physics.

When have we heard that phrase before? In 1919, when Albert Einstein’s General Theory of Relativity was first verified and the announcement was made at the Royal Society in London.

There was nothing particularly secret about Einstein’s work, just as there’s nothing secret about the CERN project. It’s an international effort that is publicly financed and has its own publicity machine. But we must remember that the theory of relativity led ultimately to nuclear weapons, and once the laws of physics are rewritten we’ll be faced with the prospect of military advances of terrifying force.

When Hitler took power in January 1933, Germany was home to some of the best military scientists in the world. Fortunately, Hitler’s prejudices led him to rule out a major military and industrial effort to develop an atomic bomb on the grounds that he wanted nothing to do with Einstein and his “Jewish science”. Instead Hitler concentrated his resources on developing long-range rockets. His “flying bombs”, or V-1s, and his enormous V-2 rockets were formidable weapons, inspiring fear in Britain and causing a great deal of trouble. But they were not war-winning weapons, as they carried only conventional warheads. Had Hitler been able to use his V-2s to deliver A-bombs, he’d have won the war—or at least been able to force us into a peace that left him and his war machine intact, a frightening thought.

As it was, by early 1940 Einstein and other scientists were able to persuade President Roosevelt that a nuclear bomb could be made. Britain started collaborating on its atomic bomb research with American scientists after the US joined the Allies at the end of 1941. The result was the Manhattan Project, which produced nuclear weapon prototypes in 1944 and two actual weapons capable of being delivered the following year. They arrived too late to be used against Nazi Germany. But they were successfully deployed against Japan in August 1945, compelling it to submit to unconditional surrender.

By avoiding an invasion of Japan more than a million Allied soldiers’ lives were saved and perhaps those of 3 million Japanese. This was a classic case of a new kind of military science winning a war in one stroke.

The initial concept for atomic weapons could have been developed only by a free society, one where people are at liberty to receive and process ideas of every kind. And I suspect this principle still holds. Breaking the speed-of-light barrier will lead to fundamental revisions in scientific theory.

These in turn will produce new processes, some of which will inevitably have military applications. One possibility is the creation of explosive forces equivalent to the Big Bang that produced the universe, that is, a genuine doomsday weapon. The fear created by such a weapon would enable its possessor to keep the peace and prevent any other powers from duplicating it. It’s essential that such a weapon be in the hands of the US and that this time the US keep its monopoly.

I have no doubt that the West, having a free system of universities with research programmes, retains a big lead in the latest military research and the systems such research produces. A case in point is the capacity to jam, confuse, rewrite and even control an enemy’s computers, which, with some assistance from America and Britain, Israel is using to retard Iran’s development of nuclear weapons. Thus far the strategy has been hugely successful—to the point that it’s been unnecessary for Israel to carry out an actual strike against Iranian installations.

This work is at the very frontier of computer technology, but in the long run such defensive measures need to be reinforced with new weapons. Rewriting the rules of science should enable us to develop such weapons, provided we’re willing to devote sufficient resources to the project, as the US did with the Manhattan Project.

Could Russia and China do the same? Only if they open their societies and universities to ideas and let their scientists pursue their research in freedom. This would involve transforming their whole view of life, which would, perhaps, make genuine world disarmament possible.

The author is an eminent British historian and author

Tweets by @forbesindia
Poverty Line: Dialogue Of The Deaf
Forests Are Still Vanishing, But At A Slower Rate