The first look inside the new face of one of London’s largest, most opulent homes, Carlton House Terrace 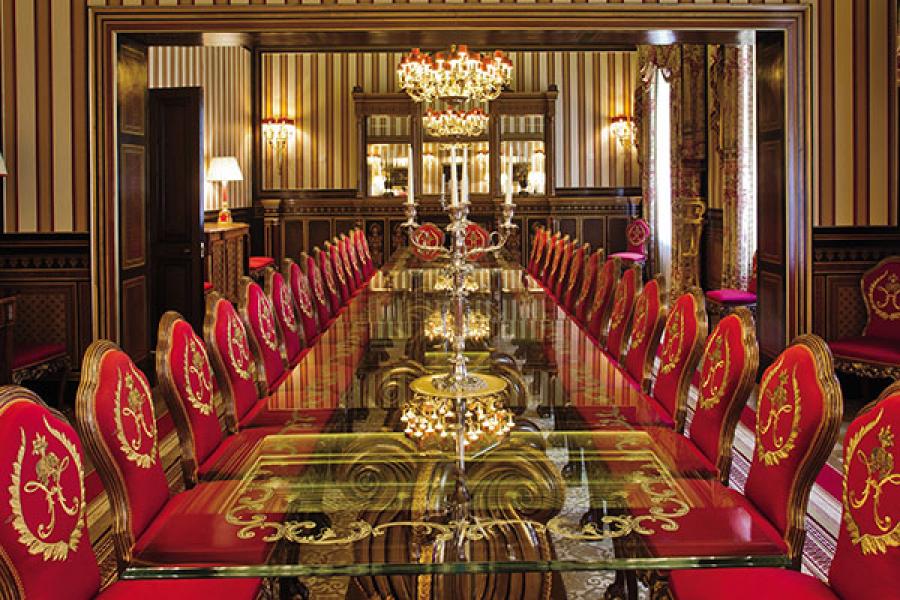 Image: Brijesh Patel / The Kalory Agency
Royal restoration: The dining room at No. 16, with a glasstop table seating 32. Right: A marble passage and the entranceway to the Hindujas’ new masterpiece

The mansion at Carlton House Terrace, in the heart of London’s Westminster neighbourhood near Buckingham Palace, overlooks St James Park and the Mall, and offers its own proper British lesson in the mutability of history. Outside of the entranceway to the 67,000-square-foot, 25-bedroom dwelling, built on the site of the 18th-century boyhood home of King George IV, is a statue of Queen Victoria, who liked to call herself “the Empress of India”. The mansion—which consists of four interconnected, six-story white Georgian houses—is now owned by members of present-day business royalty: The billionaire Hinduja brothers, who hail from the great queen’s former colony.

The four siblings—Srichand, Gopichand, Prakash and Ashok—control the Hinduja Group, a multinational conglomerate with interests in oil, automobiles, banking, real estate and media. The eldest two—Srichand and Gopichand—have lived in London since the 1970s and are British citizens. Prakash resides in Switzerland. Ashok, the youngest, is based in Mumbai. Their combined fortune exceeds $9 billion, No. 6 on our list.

The Hindujas are no strangers to this part of London: They also own a four-floor, 25,000-square-foot pad right across the street from Carlton House Terrace. But the brothers had long yearned for something grander. The chance to make good on that desire came when the Crown Estate, which manages the royal property portfolio, decided to sell some of its holdings. Among the first to come to market: The Nos. 13 to 16 homes at Carlton House Terrace—all Grade 1 Heritage buildings—which the Crown Estate itself had used as its headquarters for 35 years.

The property had an unusual provenance, part royal, part commercial. King George IV—then the prince regent—had spent lavishly to outfit the original Carlton House, a contender to be his palace. But when he ascended to the throne, he chose Buckingham House (now Palace) for his home. He had the Carlton House demolished. It was then rebuilt in the 19th century by John Nash, one of the king’s favourite architects, as two rows of white stucco terraces with a Corinthian-columned facade, and was renamed for its new look.

The houses were later occupied by the likes of William Gladstone, the Victorian-era prime minister. In the 1930s, they fell into commercial hands, were used as offices by the British Red Cross and the National Portrait Gallery, and were even used, for a while, as a casino.

In 2006, when the Crown Estate listed it for sale, the Hinduja brothers went all-in, beating out bids from Russian and Middle Eastern billionaires, closing the deal for $95 million for a 125-year lease. Over the next five years, the brothers spent another $95 million restoring the mansion, a project that involved nearly gutting it to its bare brickwork in several places. At its peak, the house had 140 people working on it, says Kash Chandarana, the chief executive of AMC Project Services, the asset management firm contracted by the brothers to oversee the restoration.

The Hindujas retained Weldon Walshe, a London architectural firm, to restore the buildings. “The family’s mandate was to return the house to its former glory,” says Sandie Altman, Walshe’s managing director. He adds that the project initially felt “daunting”: Every aspect was closely scrutinised by English Heritage, the entity that acts as custodian for the country’s historic sites. Those folks were apparently very pleased with the work. “Of all the heritage buildings in Westminster, this one sits at the top of the tree,” says Timothy Jones, the principal inspector at English Heritage. “Nothing else quite equals the grandeur.” 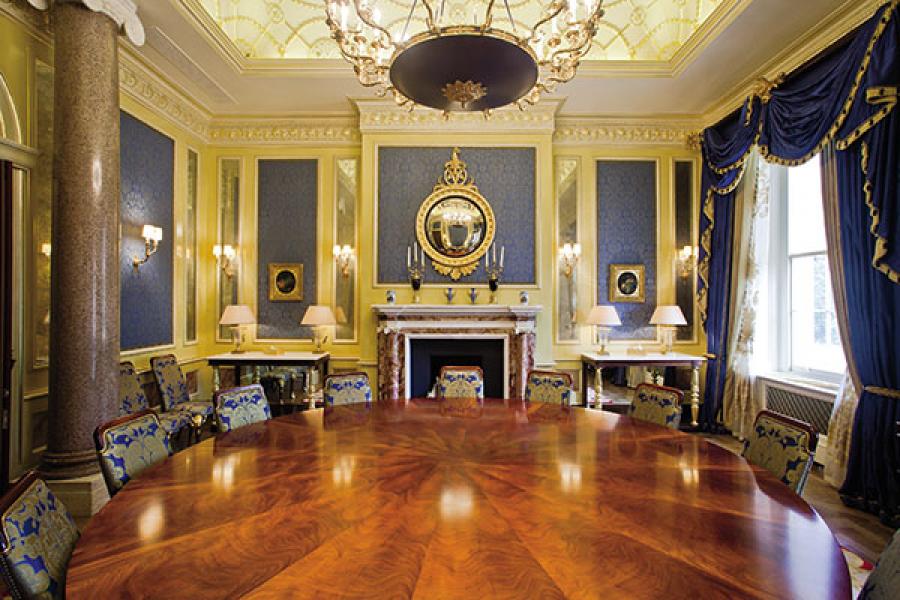 Image: Brijesh Patel / The Kalory Agency
Heritage house: The family’s informal dining room; the four Hinduja brothers
The Hindujas formally opened the home in October 2011 when they hosted a grihapravesh, a traditional Indian housewarming party, presided over by Hindu priests and attended by 300 friends and family. Guests at subsequent parties have included fellow billionaires Lakshmi Mittal and Mukesh Ambani, who is India’s richest person. But the brothers have been media-shy about the house, refraining from letting the press inside—until I was invited for a tour earlier this year.

The brothers are nowhere to be found—they still occupy their house across the street, for the time being. Instead, I’m given a tour by Chandarana. My first impression is that, despite the constraints imposed by English Heritage, the family had succeeded in imprinting their own heritage onto a quintessentially traditional English setting. The main en- trance hallway is sort of a microcosm of the home’s decor: Near a statue of the Hindu god, Ganesha, there are two large paintings of what seem like English landscapes but containing Indian particulars, like a peacock and a parrot.

On the day of my visit, there’s a buzz of activity. Dozens of household staff members flit about the mansion. As I’m escorted into the dining room, I’m told that this evening, the brothers are hosting a dinner for a tennis “legend” whose name they won’t disclose. The legend will no doubt be pleased with the ambience. A 32-seat glass-top table extends across the 46-foot room whose distinctive feature is the ornate Greco-Moorish ceiling design, the handiwork of Owen Jones, the Welsh architect who drew inspiration for his geometric designs from Ottoman-era Islamic decorations. One of the brothers’ favourite spaces is the first basement, which was originally quarters for the male staff. It’s been converted into a leisure zone, which includes a swimming pool, gym and 12-seat private theatre, where the brothers take in Bollywood films. The former living quarters of the female staff, situated on the topmost floor, have been converted into a modern penthouse apartment, complete with stunning views of the London skyline.

As my tour concludes, I ask Chandarana whether the brothers are happy with the investment. I’m told of the nearby 50,000-square-foot house at No. 18, which was recently put up for sale with an asking price of $400 million. Using that benchmark, according to Eliza Leigh, property partner at Knight Frank in London, the Hinduja house is already worth more than $500 million. Not that the Hindujas are looking to sell. Chandarana says the family is actually eyeing more such acquisitions, “if they’re available at the right price”.

Tweets by @forbes_india
Suit Yourself: The Latest, and Best
Podcast: Micromax Grows Up