The oil-and-telecom tycoon added $9.3 billion to his wealth last year, according to Forbes' annual list of the country's richest billionaires 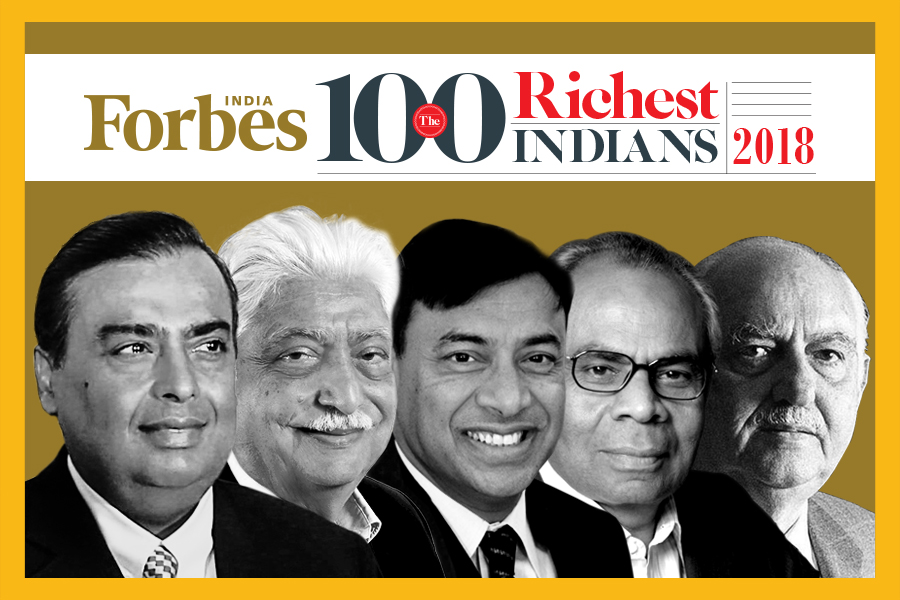 Oil-to-telecom conglomerate Reliance Industries Ltd chairman Mukesh Ambani has topped Forbes’s annual list of India’s 100 richest for the eleventh straight year, with a net worth of $47.3 billion.
Overall, it was a slow year for the growth of net worth of India’s richest. The combined net worth of the 100 wealthiest individuals grew by only 2.7 percent to $492 billion from $479 billion in 2017.

Naazneen Karmali, India Editor of Forbes Asia, said: “In a challenging year, which saw the rupee taking a tumble, the country's 100 richest collectively managed to hold their own. Moreover, new billionaires continue to be minted, which indicates that India’s entrepreneurial energy is upbeat as ever.”

Ambani added $9.3 billion to his wealth amid the continuing success of telecom arm Reliance Jio. However, this is lower than the $15.3 billion rise he saw in his wealth in 2017.

In the process, the Hinduja brothers ($18 billion) dropped one rank to number four this year, with their combined wealth falling marginally from $18.4 billion last year.

Shapoorji Pallonji Group’s Pallonji Mistry rounded off the top five in this year’s 100 richest Indians list. His wealth declined slightly to $15.7 billion in 2018 from $16 billion in the year ago period.

A rout in the rupee—down 13 percent since a year ago— wiped out the Indian stock market’s 14 percent rise in the same period. Even so, 11 of the nation’s 100 richest saw their fortunes jump by $1 billion or more. However, nearly half of the top 100 saw their fortunes shrink -- with the wealth of six billionaires in the list shedding over $1 billion.

Patanjali Ayurved’s co-founder Acharya Balkrishna saw his wealth erode by more than a fourth as sales of the herbal consumer goods company slowed. Balkrishna’s rank dropped six notches to number 25 with his wealth shrinking to $4.8 billion this year from $6.55 billion in 2017.

Low-cost airline Indigo’s father-son duo, Kapil and Rahul Bhatia, took the hit of higher fuel prices. Their ranking fell 10 notches on the list to number 41, with $3.55 billion in wealth, compared to $4.4 billion in year ago period.

“The growth in the overall wealth of India’s richest in a challenging year is one indicator of the country’s economic advancement. New faces on the list – five of them – are also an encouraging sign of the rise of domestic mega-firms, many with a presence in global markets," Brian Carvalho, Editor, Forbes India.

The 100 wealthiest on this year’s list are all billionaires. However, merely being a billionaire didn’t warrant a spot on the Forbes 100 richest India’s list this year too. The minimum amount required to make the list this year is $1.48 billion, a marginal increase from last year's $1.46 billion.

Yes Bank's Rana Kapoor is one of the dropouts after the Reserve Bank of India asked him to step down as CEO in January. The announcement saw the bank's share price drop 29 percent in a day.

Making his appearance on the list a second time, Paytm’s Vijay Shekhar Sharma climbed 25 ranks, with his wealth growing to $2.15 billion. In August, billionaire investor Warren Buffett’s Berkshire Hathaway invested $300 million in Paytm, valuing it north of $10 billion, which boosted his net worth.

Only four women made it to the list, with Biocon’s Kiran Mazumdar-Shaw being the biggest gainer in percentage terms. Her wealth soared by two-thirds in one year, catapulting her 33 notches from rank 72 to 39 this year. Shares of Biocon jumped when it received approval from the US Food & Drug Administration last December for a cancer drug co-developed with Mylan and have nearly doubled in the past 12 months. In the 2018 list, Mazumdar-Shaw found a comfortable spot at rank 39 with a net worth of $3.6 billion.

This list was compiled using shareholding and financial information obtained from the families and individuals, stock exchanges, analysts and India’s regulatory agencies. The ranking lists family fortunes, including those shared among extended families such as the Godrej and Bajaj families. Public fortunes were calculated based on stock prices and exchange rates as of September 21. Private companies were valued based on similar companies that are publicly traded.