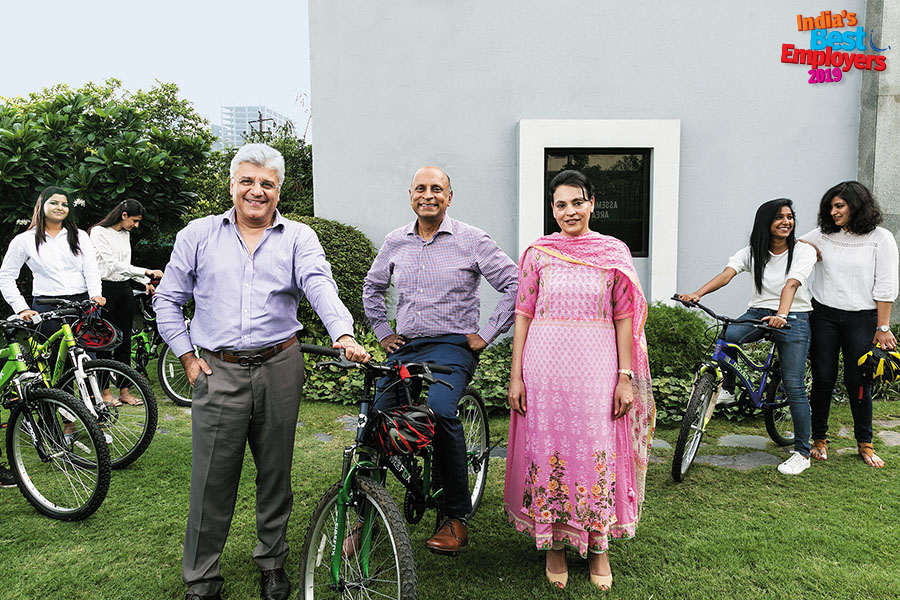 
About 20 years ago, if someone had told Gagan Jyot that she would some day be a promoter in the company she had just joined, she would have laughed.

But today, she counts herself among the handful of those in India’s corporate world who have done exactly that. Jyot is senior vice president of human resources (HR) at Noida-based information technology (IT) services provider RMSI, and one of the nine promoters at the company.

“Like many here, I have been in this company for a long time,” says Jyot. “It’s not easy to make that transition from an employee to a promoter. But when you realise that your organisation values you, then the commitment grows and there is no looking back.”

Gagan joined RMSI in 1998, straight out of college, as an executive in the HR department. When her boss quit, the company promoted her, in line with its practice of promoting from within. It’s a practice the company’s co-founders Rajiv Kapoor and Anup Jindal put in place right from the beginning, when they took over the company in 2011. Until then, RMSI was part of the UK-based Daily Mail and General Trust group.

In 2011, the promoters were looking to sell the loss-making company when Kapoor and Jindal, then senior employees at RMSI, bought it. Since then, it has grown to become one of India’s prominent software services company, with over 4,000 employees across the world.

“It is about walking the talk,” Jyot says. “You give people ownership, something to look forward to and that’s incentive enough to deliver.”

RMSI was founded in 1991 by three graduates from Stanford University in New Delhi to focus on Geographic Information Systems services. In 1992, US-based RMS bought a majority stake in the company and in 2002, the ownership changed hands to DMG Information, the investment arm of Daily Mail and General Trust plc.

Kapoor and Jindal took over in 2011, and turned around the loss-making firm. RMSI today has offices in Noida, Hyderabad, and Dehradun, as well as five international subsidiaries. It primarily provides geospatial technology solutions and IT services to clients in sectors such as utilities, telecom, navigation and location, agriculture, natural resources, land information management, risk and insurance. 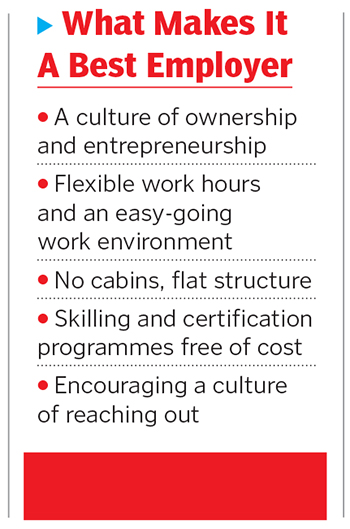 “It’s in our DNA to be fair and transparent,” says Kapoor, chairman of RMSI. “People are free to talk to us. The other thing is, we are an equal opportunities employer.” Employees at RMSI are often allowed to work from home and keep flexible hours. There is a significant focus on activities that include music, photography and cycling clubs. The company has an attrition rate of 9 percent, among the lowest in the industry, and average tenures often last between five and six years.

“What differentiates RMSI, is the exposure and empowerment given to young employees,” says Saumyajit Ray, co-founder and CEO of Emoha Elder care, a Gurugram-based startup focussing on elderly care, and a former RMSI employee. “I have learnt much from their HR practices that I emulate in my own company. There are no reservations, and youngsters are allowed to speak their mind, approach senior management and sit with them in meetings. They also don’t shy away from giving responsibility for high profile jobs to youngsters.”

“We try to bring together everybody’s aspiration with ours,” says Jindal, CEO. RMSI offers various learning and certification programmes, developed in-house and paid for by the company, to upskill its employees. “Today, if you are doing one job continuously, and the company says we will give you access to various learning programmes and teach you something more, to advance your career, it can boost morale,” he adds. “Learning and development are key motivators. We trust our people, we want them to grow and it will benefit us and them.”

There is also a quarterly objective and key result platform that helps the company adapt to the changing needs of the industry. Employees are asked to figure out their quarterly objectives and goals, apart from the yearly ones, which help them keep track of their progress.

At the core of their work culture, says Kapoor, is a value-driven process based on integrity and respect. “Both of these need transparency. You can have five people or 10 or 2,000. If you are committed to them and if you are transparent with them, then it will help the organisation grow,” Kapoor says.

RMSI works with a flat structure, without hierarchies, and that is visible at the workplace, which lacks any cabins. Even Kapoor and Jindal sit alongside employees, and are always accessible to them. “I think people are happiest when they can reach out to others,” says Jindal.  “Somehow, the way corporate culture has evolved, that had been missing. If you create a culture of reaching out, it brings a lot of positivity. Only when you are taken care of, will you look after others. Because we have done that, they reach out.”

He adds that when they took over, it was just the two of them. Since then, seven others have played a key role and therefore acquired a stake in the company. “This also sends out a message. People can think like owners,” says Jindal.

That also means adding new members to the core promoter group. “We are creating new ventures, and the promoter group will keep growing,” says Kapoor.