To invest in gold is a classic investment advice. Not only is the yellow metal a safe investment instrument, it is also an effective asset diversification strategy. It is, however, equally important to understand the fundamental price drivers of gold and make an informed investment. In India, in the past, gold has served the twin purpose of being used for jewellery and for maintaining the purchasing value of a depreciating rupee.

Gold has been among the most rewarding asset classes for the better part of the last decade, with prices climbing more than six times during the 2001-2011 period. However, it was followed by three years of price correction, when the metal lost about 40 percent of its value. The sharp price drop in the second quarter of 2013 led to fears of prolonged pain, but 2014 saw the arrest of gold’s free fall, albeit in a subdued price environment.

Why Gold?
Gold has been viewed as an effective hedge against currency debasement and a safeguard against inflation. Gold neither pays dividend/interest (unless lent for ‘yield’ in return) nor does it carry a guarantee to repay principal over a period of time as there is no maturity date. The threat of default on gold investment, however, is zero. It has little productive use apart from a tiny fraction used because of its non-reactive properties. Gold isn’t anything like a residential/commercial property; it requires minimal upkeep. However, during times of despair and runaway inflation, gold has provided protection to investors. When steep declines in the value of assets, such as equities, or high volatility of other assets lead to a demand for a stable store of value, gold is the right answer. It also provides liquidity in an environment (extreme economic events) where it may be difficult to realise the value of other assets. Gold has proved to be a hedge against flawed political and economic policies that have an adverse impact on most asset classes. Think of the recent ruble crisis. 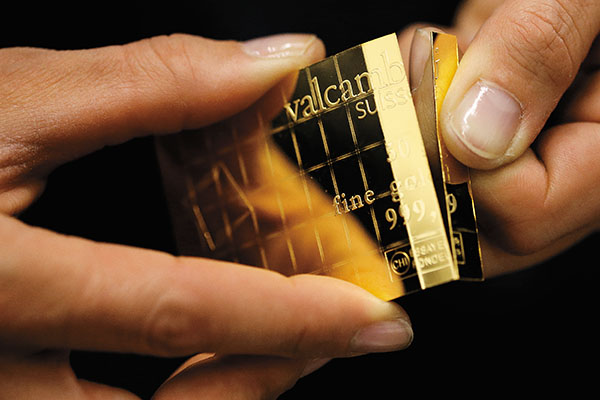 Recent Performance
The recent lacklustre performance can be attributed to the dollar’s strength; the dollar’s
gain is gold’s decline. Gold has tumbled 40 percent from its 2011 highs as the dollar strengthened by around 20 percent. Gold had delivered positive returns every year till 2011 when it peaked. Buyers turned sellers when inflation cooled down post-2011 combined with the Fed’s ‘taper tantrum’.  After three years of a rather volatile journey, gold’s performance has been relatively stable in 2014.

Demand for gold is a good indicator of price expectations and especially medium- to long-term expectations. The rapid decline in gold prices between April and June 2013 saw investors rush to gold but this buying was shortlived as investment demand weakened in 2014 with investors lacking conviction in their pricing expectations. Local price premium declines in markets like India and China also confirmed the muted appetite for gold. While gold supply by mining has remained more or less unchanged in the recent past, the supply from recycled gold has come off significantly after high levels of recycling were witnessed during the boom years between 2008 and 2011. 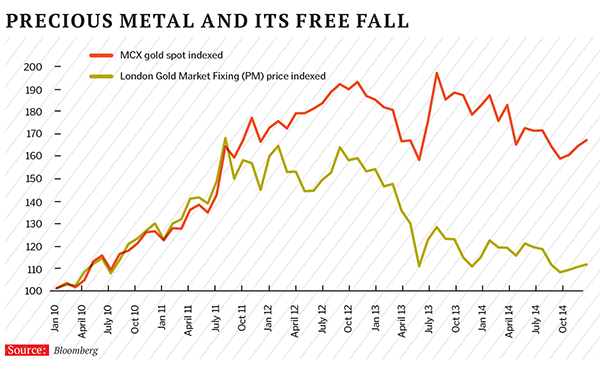 Central Bank Buying
Central banks have time and again sought refuge in gold during times of economic hardship and have been on a gold-buying spree since 2010. Overall purchases made by central banks 2010 onwards stood at an estimated northward of 1,800 tonnes, almost double the sale of gold by central banks in the previous five years. What we see here are two inferences—with many economic and geopolitical wounds still not healed, central banks continued to seek protection under gold. More importantly, somewhere we are witnessing a mild distrust towards the dollar and the inflating Western currencies. The usual suspects, the euro, yen or even the sterling pound have exhibited bouts of volatility and a strong consensus of a decline against the dollar. A large chunk of the recent gold buying has been from China, Russia and the Eurasian countries, which have started to distrust the dollar. The larger point here is that many countries (especially export-based economies) would want to, at some point in the future, delink from the US monetary policy and benefit from protection by gold assets.

Gold and Interest Rates
One of the costs of holding gold is opportunity cost, which is captured by the real interest rate. Higher real interest rates, for some time now, have translated into higher opportunity costs, putting downward pressure on gold prices. In India, with a backdrop of softening real estate market and positive real rates, a higher allocation within incremental physical savings will come to gold. However, for the average Indian household, the shift from physical to financial savings will be a gradual process. Although real interest rates have turned positive, inflationary expectations of households (still in double digits) need to ease before incremental savings get diverted to financial assets.

Having said that, I believe that the Reserve Bank of India’s (RBI) stance with respect to real rates has changed with RBI governor Raghuram Rajan repeatedly mentioning the need to keep real rates positive so that household savings can be incentivised to invest in financial assets.

To Sum It Up
The returns from gold as an asset class for the rupee investor in a dollar-denominated gold is marked by two distinct phases—leading up to 2011 and 2011 onwards. The dollar-denominated price of gold ensured healthy returns for the Indian investor in gold till 2011. The three years after that were characterised by a rapidly depreciating rupee against softening gold rates. Hence, the MCX gold spot lost only 5 percent during this period when The London Gold Market Fixing (PM) index lost 38 percent from its 2011 highs.

Hereon, I believe that global prices will be influenced by the geopolitical scenario—rising risk will drive investors (and central banks too) closer to gold. One counter balance that I see is a possibility of a lower inflationary regime driven largely by globalisation of manufacturing activity (lesser pricing power for workers), technology (lower cost of production), global indebtedness and an ageing population (with the exception of countries like India and large parts of the emerging markets). For rupee-denominated gold, the steep depreciation of the rupee has partially offset the global gold price decline. The new regime under Rajan wants to maintain the purchasing power of the domestic currency, which could maintain the rupee in a relatively tighter band against the dollar compared to the recent past. For the Indian investor, the returns hereon will be increasingly determined by movement in global gold prices rather than rupee exchange rate movement, which was the case in the recent past.