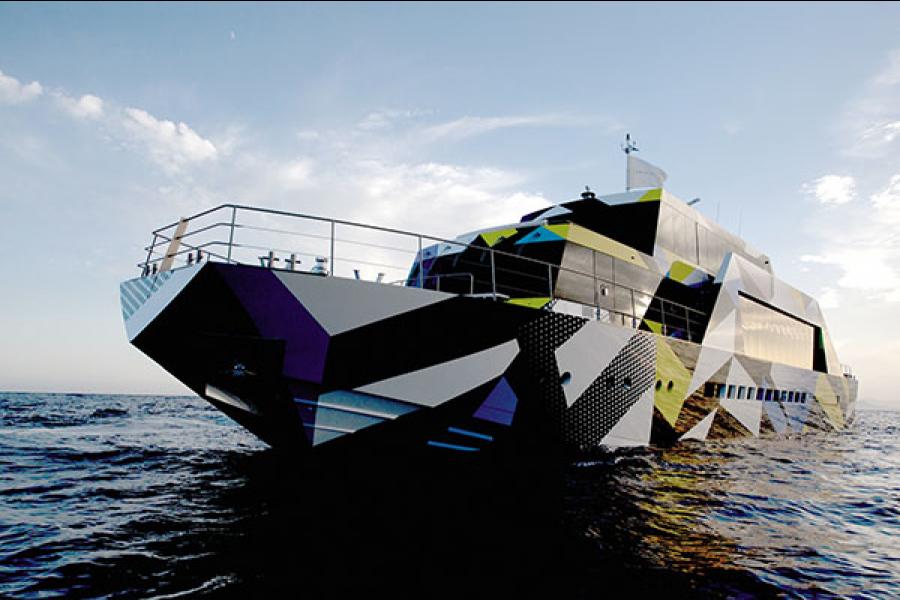 Image: Yiorgos Kaplanidis
See-worthy: “We did what we wanted. Style was irrelevant,’’Dakis Joannou says of Guilty. “We designed a boat in the antistyle method.”

There have always been charges of excess in the art world, and Dakis Joannou has one answer to them: Guilty. Docked in Athens’ Piraeus Port, his irreverently named 115-foot luxury craft is a fantastical collaboration between superstar American artist Jeff Koons and Italian yacht designer Ivana Porfiri. Although the colourful exterior brings to mind the Pop paintings of Roy Lichtenstein, Guilty’s bold geometric designs—alternating yellow rhombuses, pink triangles and blue polygons—were actually inspired by British naval camouflage from World War I. But there is no hiding the 72-year-old Greek-Cypriot industrialist’s super-yacht—it is a floating piece of art.

To Joannou, one of the world’s most important contemporary art collectors, what matters most about Guilty is that it provokes a reaction. “We did what we wanted; style was irrelevant,” he says. “We designed a boat in an antistyle method. We have no rules, no programmes, no plans.” Porfiri worked with him to get elements of functionality in place before moving on to Koons’s kaleidoscope design. 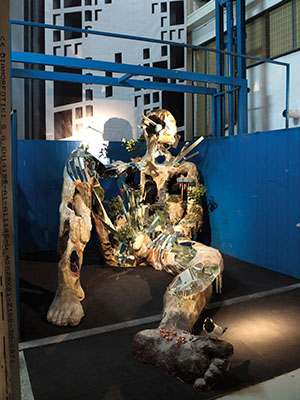 Razzle Dazzle, as the exterior pattern is called, “was a technique used during World War I as a camouflage not to conceal an object but to confuse the viewer,” Koons explains. “The process was extremely complex,” Joannou adds, noting that Guilty was painted by hand. “Ivana sent the design to Jeff, and he did some 3-D designing in his studio. I did not interfere.”

On the sides of the vessel, Koons played with the idea of pyramids, an oasis and a mirage. “If the sea were calm, you would get a reflection, and the pattern would have a doubling effect making it even more abstract,” he says. Viewed from top, a huge image of Iggy Pop performing onstage stares back. “Iggy is there as a contemporary Dionysus figure,” Koons says of the rock god as a Greek god.

While the exterior is as rebellious as the Stooges’ Raw Power, the yacht’s interior takes on a completely different aesthetic. The walls and ceilings are all chillingly white, with enormous windows to maximise natural light. And much like experiencing the installations of American artist James Turrell, being inside Guilty during the day is like walking onto the set of a science fiction movie, with a central staircase that turns from pinkish violet to galactic blue and finally warm yellow. 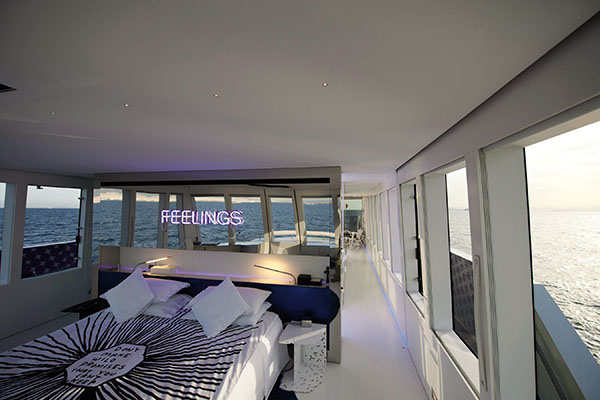 The living quarters are designed around works of art. The main cabin encompasses the top deck, generally reserved for the bridge. With 180-degree views and the word “Feelings” hanging in neon lights above the bed (a piece by British artist and musician Martin Creed), the master bedroom has a private terrace. The four guest cabins, feature museum-worthy works, while the largest portion of the main deck has a living room with Italian Radical Design furniture.

Asked if he likes Guilty’s look, Joannou is dismissive. “The word like, I don’t like,” he says from the upper floor of his Athens home. “Taste? Everyone has taste. It’s not about liking a certain piece, it’s about connecting with deeper values.” 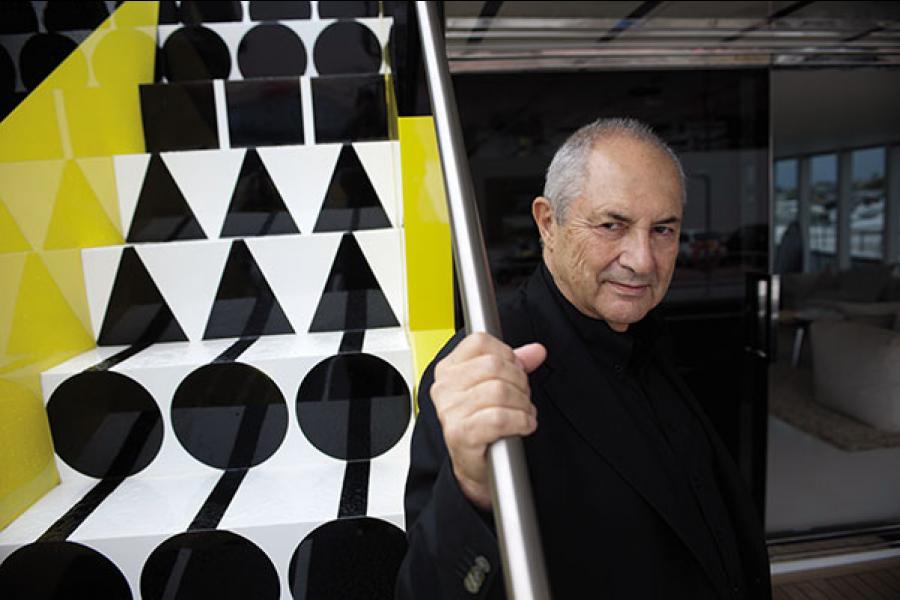 Image: Yiorgos Kaplanidis
Dakis Joannou on Guilty
Joannou began collecting art in the mid-1980s after having made his fortune expanding his family’s construction empire in the Middle East, North Africa and southern Europe. He saw a piece by the relatively unknown Koons titled One Ball Total Equilibrium Tank, a Neo-Pop sculpture depicting a basketball suspended in a fish tank, and was captivated.

“I didn’t understand collecting at first; it seemed like buying trophies,” Joannou admits. Just a few years earlier, he had started his DESTE Foundation (Greek for “to see”) to “have a dialogue” with art. “Then I saw the Jeff Koons show, saw Equilibrium, and immediately put it on reserve,” he recalls.

Joannou has one of the most important collections of post-war and contemporary artists—including Maurizio Cattelan, Jenny Holzer, Matthew Barney, Richard Prince and Mike Kelley. The more than 1,500 pieces are being curated into a core of 400 to 500 works he calls the Dakis Joannou Collection. His Athens home contains some of the more personal pieces, including a portrait Italy’s Roberto Cuoghi did of him and a sculpture of a Native American chieftain by Pawel Althamer that features Joannou’s own face. 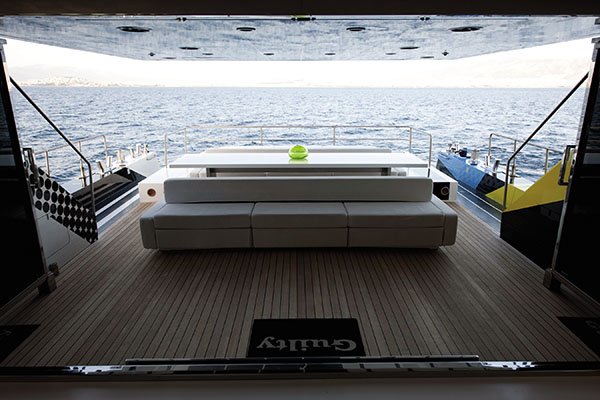 Seen from the main deck

Through DESTE, Joannou mounts exhibits, and gives awards to support emerging artists. His shows haven’t escaped controversy: A 2010 exhibit titled Skin Fruit in New York’s New Museum drew the ire of the art establishment. Critics questioned everything, from the choice of Koons as curator to the use of the New Museum, where Joannou is a trustee, to present the art of a patron. Joannou shrugged off the reaction: “The negative thing about all of that is that no one paid attention to the show.” Guilty, like his foundation or the Semiramis hotel in Athens designed by Karim Rashid, is part of the same projects that Joannou hopes will draw people to art.

But even if it doesn’t, the yacht remains a guilt-free pleasure. Going back to Odysseus, Greeks have been fascinated by the Aegean Sea, sailing to any one of the thousands of islands that populate their nautical backyard. For Joannou, Guilty doesn’t grant him bragging rights, despite being the largest work Koons has created. Rather, he uses the boat for low-key outings with his family. “I have 4 kids and 11 grandchildren,” he says plainly, “and they love it.” Above all, the super-yacht is a calculated act of irreverence that says more about its patron’s evolution as a collector than the value of his portfolio. “In the art world, someone has to take intellectual responsibility,” Joannou says. “Price? I’m not interested in that. I care about value, something no dealer can add or take away. In the long term, time is the ultimate judge.”

(This story appears in the July-Aug 2014 issue of ForbesLife India. You can buy our tablet version from Magzter.com. To visit our Archives, click here.)