The Irani flavours of Pune I had probably chosen the wrong day. Of all the days, I picked a Sunday morning to visit Vohuman Cafe. My son was famished and stood sulking as we queued up for a table behind all the other patrons, some in their house dress and looking like they had just stepped out of bed.

After what seemed like an eternity to my son, we managed to find ourselves seated on bentwood chairs with round marble-top tables. A pleasant buttery aroma hung in the air. For close to four decades, Vohuman Cafe operated out of a hole in the wall on Sassoon Road, but now we are in the newly relocated double-storeyed version of the iconic Parsi restaurant, on the same road and a stone’s throw from Pune railway station.

The eatery has a spruced-up look, and huge sepia photographs of the café from a bygone era, as well as its limited menu, adorn the walls. And yet, some things are the same.

Behind the counter stands Ramesh, an old-timer, slathering inconceivable amounts of butter on buns and toasted bread. He slices them before pushing them onto steel plates lined up in long colourful tubs that are carried by the waiters. The café has a bevy of regulars —students from the neighbouring Wadia College and people from all strata of society—who queue up for their quotidian dose of bun maska and eggs in all forms.

My personal favourites, besides the pillowy, flaky buns with dollops of butter, are the gooey cheese omelettes, topped up with piping hot milky tea. Forget the diet on this cheat day. “It’s the profusion of cheese that packs a punch,” says the elderly owner, Hormaz Irani, adding, “our signature tea is brewed with sugar for over an hour and milk is added just before serving.”

I have lived my life gorging on traditional Puneri food—thalipeeth, modak, matar karanji, sabudana khichadi and dadpe pohe, to name a few. But the city also has a wealth of Irani and Parsi cafés and bakeries that tempt you with their delicacies, whether it is the simple bun maska or the more complicated Parsi dishes.

Shapoor M Irani is the third-generation descendant of Khodabanda Irani, who migrated to India from Iran, and after selling knick-knacks for a while, bought Café Yezdan in Pune Camp in 1964. “I worked in the restaurant from class eight till my CA internship, but now I am not very involved in the affairs of the restaurant as I work as a full-time chartered accountant,” says Shapoor Irani. His father Mancher Irani takes care of the restaurant, which is open 365 days a year. “Closing the café even for a single day is considered a sin. The only day the café was shut was on his wedding day, my father tells me.” 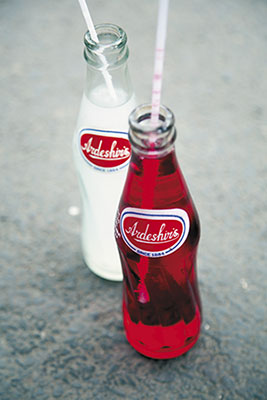 Located at Sharbatwala Chowk, the slightly grubby café has one of the most chewy brun maskas around. They have a hard crust and are best savoured dipped in hot tea. “Our bruns are rectangular and cut into two pieces so that patrons get to savour the hard crust in every bite. When they are round, the middle portion could be soft,” Shapoor Irani says.

Parsis, as is well-known, have a fixation for eggs, or eedu, and they prepare a variety of dishes with it. It is said that they can break an egg over anything and everything. At Yezdan, I dug into their recent addition to the menu, Sali Scrambled Eggs Double, whisked with milk, fluffy and with a generous sprinkle of sali or crunchy potato straws. The egg bhurji, too, is a much sought-after dish. “It’s our special onion garlic masala that lends the inimitable taste to the bhurji,” says Shapoor Irani.

Despite the fact that the cafés offer the choicest range of Parsi dishes, without the customer having to dig too deep into her pockets, many iconic Irani cafés like Naaz, Palace, Gulzar, National and Deccan Queen have had to down their shutters in the recent past. But many are still around, defying the odds.

Across Yezdan is another such eatery and a hallmark of Pune — Dorabjee & Sons, which has been standing strong since 1878. Run by Darius Dorabjee, a fourth-generation descendant of Dorabjee Sorabjee Chindy, who started the café, it is a must-visit when in Pune. During the British era, Dorabjee has received esteemed clientele like Lord Wellington. It is also said that noted filmmakers like Prithviraj Kapoor, Raj Kapoor and other well-known names would frequent the restaurant. 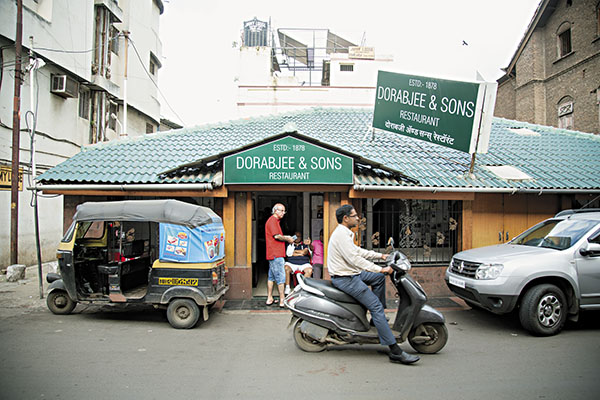 At the entrance, one can see the progression of the menu card since 1940, when a mutton biryani was priced at just 3 annas (an anna is 1/16 th of a rupee).

There is not much to write home about the cafe’s ambience; it has Formica tables, plastic chairs and bare walls. But unlike the other Irani restaurants in the city, which lean towards breakfast and snacks, this eatery also serves classic Persian dishes like dum biryani (chicken and mutton variants), mutton kheema, mutton liver masala, mutton paya, chicken with sali and mutton brain masala. It’s definitely a pit stop for meat lovers, with limited options for vegetarians. I like dropping by on Sundays for the special menu of mutton cutlets, mutton and chicken dhansak with brown rice and, my favourite, the patra fish.

Fish is considered auspicious by Parsis. And Dorabjee’s pomfret fillet marinated with chilli powder, turmeric powder and later smeared with a paste of coriander, mint leaves, chillies, desiccated coconut and steamed to perfection in a plantain parcel is divine. As you open the parcel, the aroma of fish cooked in the medley of spices hits you and within minutes you’ll scrape the leaf clean. The masala coated on the fish is a fiercely guarded secret, handed down from generation to generation. 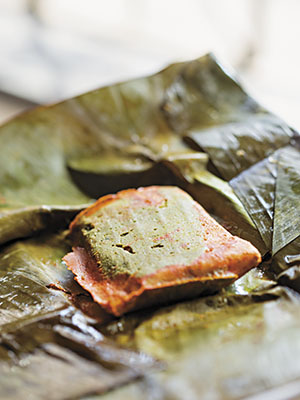 Dhansak, the traditional funeral dish of the Parsis, is a curry prepared with an assortment of lentils, vegetables and chicken. “We slow-cook the dhansak on charcoal fire for four hours, which is why it tastes so good,” says Dorabjee. It is served with kachumber and long-grained rice cooked with whole spices like cinnamon, cardamom, cloves, cumin and caramelised sugar or jaggery (which lends the brown colour to the rice). The brown rice makes for a perfect subtle companion to the otherwise complex flavours and textures of dhansak. The deep-fried mutton cutlet is made with minced meat, chilli powder, coriander leaves and a dash of spices, dunked in egg white and coated with bread crumbs. And those with a sweet tooth should definitely try their Lagan nu custard, their pièce de résistance, which is baked traditionally in wood fire.

A heavy meal at Dorabjee is also best washed down with a bottle of Ardeshir’s Cola, a product of a Parsi family-run business that has been around since 1884.

When I walk into Ardeshir & Sons at Sharbatwala Chowk in Pune Camp, I find Nadir Pavri sitting behind a desk with an unused desktop perched on it. I ask if he is the manager of the outlet. “You can say so. During my spare time I offer my prayers sitting on this chair, so I always wear my prayer cap,” he replies. He is surrounded by crates of colas. “In summers, we manage to bottle around 100 crates a day though demand has gone down thanks to the big cola competitors.” Though Ardeshir’s has 10 flavours, raspberry and soda are the hot flavours, and I’d recommend both. 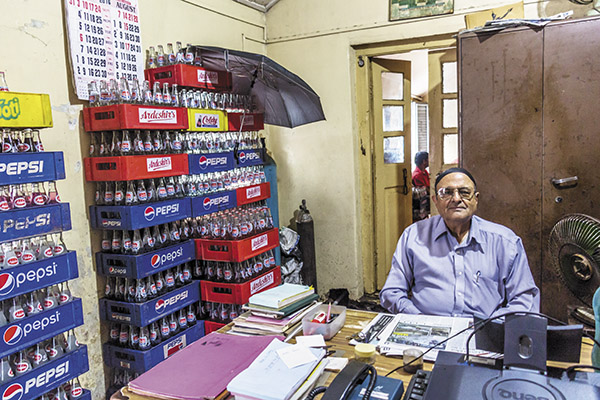 While restaurants like Dorabjee & Sons, Yezdan and Vohuman have remained loyal to Parsi dishes, Good Luck Café at Deccan Gymkhana has expanded its menu to include South Indian dishes. The reason is simple: They want to adapt to the changing market trends and not get phased out. I, of course, stick to their traditional offerings. More specifically, their masala omelettes, whose spice levels hit the roof, and are a rage among collegians. I recently took along a friend, who despite having lived in Pune for a decade had never visited a Parsi restaurant, and we binged on the omelettes, kheema pav and crispy patti samosas filled with chopped veggies. But binging doesn’t mean I had no space for their superb caramel custard. 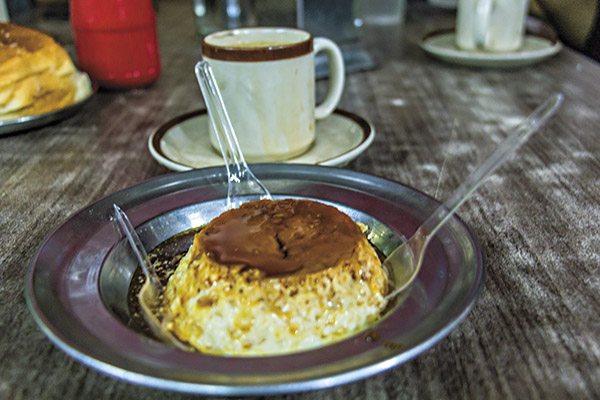 Besides the cafes, Pune is also known for its fabulous Parsi bakeries. Kayani Bakery on East Street is renowned for its Shrewsbury biscuits, which are sold out minutes after they are out of the oven. I know people not from the city who buy the biscuits in large quantities and freeze them at home so that they can enjoy these crunchy, buttery delights all through the year.

When I asked the staff at Vohuman and Yezdan if they baked their own bread, I received identical answers: They sourced the bread from Persian Bakery, which started in 1921, or Imperial Bakery, near Poolgate Post Office, that has been around for six decades. 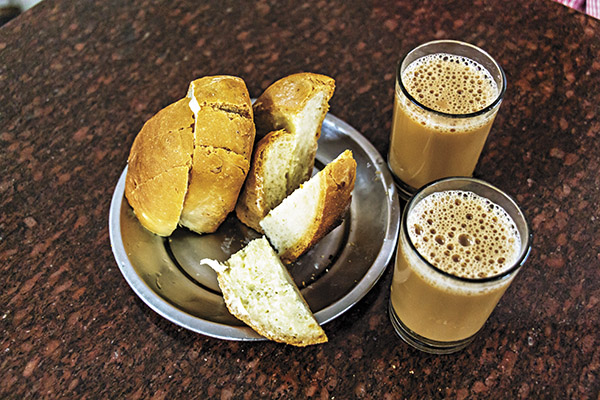 Image: Rathina Sankari
Brun maska is best had by dipping it into hot tea at Café Yezdan

As I walked into the Persian Bakery in Kolsa Galli on MG Road, the aroma of oven-fresh milk bread, cakes, a variety of puffs and kharis in all shapes and sizes wafted in the air. “Our products are made dil se using the best ingredients, hence the wonderful taste. We take pride in our breads, cakes, puffs and cookies,” says Abdul Rehman, the manager. Of course, it could also have to do with their babul-wood-fired oven that lends a distinct aroma to their products. With a steady stream of customers, its goodies are fast selling. I walked out of the bakery with a packet each of rota, milk bread, peanut cookies and wheat almond cookies.

Back home that evening, I took a sip of my chai and bit into the palm-sized rota. While my tea was nowhere close to Irani chai, the stodgy, coarse-grained, dense cookie made of semolina was filling and fulfilling, and I sent out a silent thanks for the simple pleasures of life that Pune’s Parsi legacy makes possible.

Tweets by @forbesindia
North Indian business is on a growth path, but it has miles to go
Chinese tourists win big for Australian casinos