Evolution of the Indian Olympian 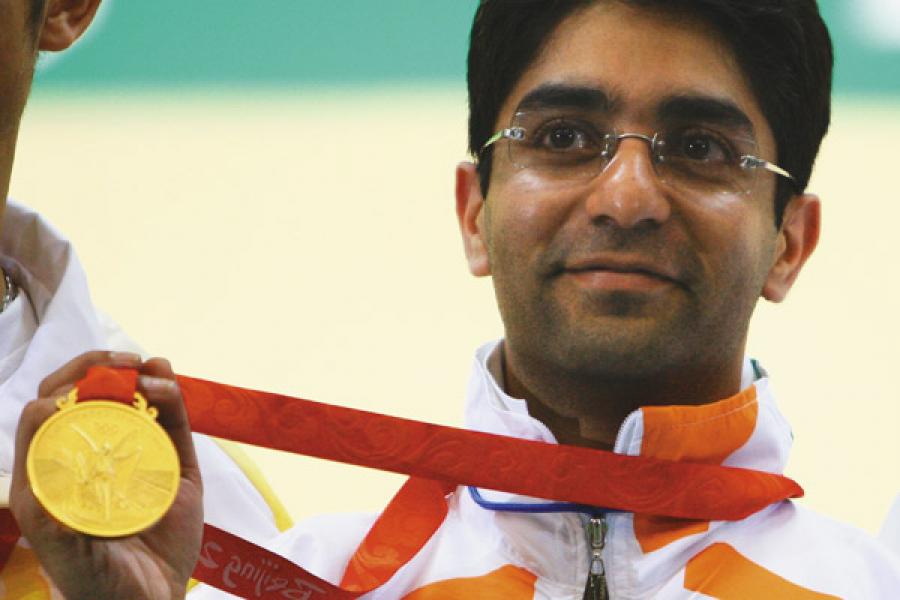 Twenty years ago, when I went to my first Olympic Games, we newbies were tutored to look first for the Olympic Hockey schedule and then plan what else we would see and report on. We certainly had not been taught to look for India in the medals tally; aside from hockey, India had only ever won three other medals. Even our last hockey win, in 1980, had come after a longish gap, and at Games depleted by a boycott.

We worked then on rickety portable typewriters—computers and mobile phones were distant dreams—and skimpy budgets. But we loved every moment of it. Our days began with a walk up Montjuic Park to the Olympic Stadium (built during the 1929 depression but not used till the Games).

Montjuic is a hill overlooking Barcelona’s harbour and this is where the famous Font Magica (Magic Fountain) is located right under the Palau Nacional, the National Museum of Catalonia. At that time, the Catalans were fighting for independence and the police were ever on guard for any trouble.

But for us, Spain had this air of romance and we were happy soaking it up. We would sit at roadside cafés, swill beer, sip wine and watch senoritas till dawn broke. We filed mini-reports of boxers being eliminated in the first round, of iconic archer Limba Ram reaching the second round, of the hockey team losing or drawing and occasionally beating a lowly-placed team.

Our moment of immense pride came when a young Leander Paes and the gentlemanly Ramesh Krishnan got to the tennis men’s doubles semis. The entire Indian contingent was there to cheer them, but they lost to Goran Ivanisevic and Goran Prpic of Croatia. The Croatians would go on to win their country’s first medal (Ivanisevic won a singles bronze as well). 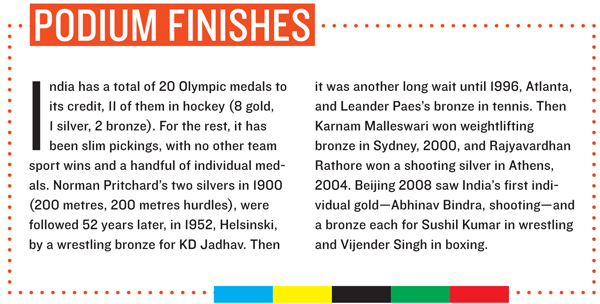 My only souvenirs from Barcelona were a medal they gave every visiting journalist and the Miro reprint I bought in a gallery shop. Perhaps the Indian athletes got keepsake medals too; they certainly didn’t win any, tying for 65th place in the tally: 64 countries won medals.

Four years later, en route to Atlanta, when I walked through US Immigration, the friendly officer (immigration officers still smiled then) asked how many medals India was expecting. I was stuck for an answer; I didn’t know what it meant for an Indian to win an Olympic medal.

That was about to change.

First, though, came tragedy. On the night of July 27, 1996, a senseless and deranged idiot placed a bomb in the Olympic Park, which killed two people and scarred everyone at the Games—I certainly lost my innocence that day.

A week later, a day after Leander Paes lost his singles semi-final to Andre Agassi, he was to play a little-known Brazilian, Fernando Meligeni, for bronze. That day, I missed the media bus to the venue, which was miles away. Luckily, I found another unpunctual reporter with whom I could share the king’s ransom—US$100!—of a cab fare. We reached the courts just as Paes was settling into the match. He lost the first set, but won the next two, and India had a medal for the first time since 1980 and the first individual medal since 1952! Leander had emulated his father, Vece Paes, who was a member of India’s hockey team in 1968. More important, he made Indians believe that they could aspire to win medals.

The Sydney Olympics in 2000 marked the beginning of my freelance career. For the first time, I drew up my own schedule to allow me to see and write about the events where I felt India had a medal chance. Even so, old habits kept me at a hockey match (India vs Australia, a 2-2 draw) while history was happening elsewhere. The weightlifting venue was some distance away, so rather than miss out totally I, like the other Indian scribes, watched on TV as Karnam Malleswari become the first—and so far only—Indian woman to win an Olympic medal.

A few days later, in their last league match, against Poland, our hockey team let in a goal with seconds to go, conceding a 1-1 draw and missing out on making its first semi-final since 1980. Boxer Gurcharan Singh also suffered heartbreak: he had the same number of points as Ukrainian Andriy Fedchuk, but the latter won the verdict on the basis of more punches thrown.

Athens had made a bid to get the centennial games in 1996, but lost to Atlanta’s sponsors-strengthened might. But they got their chance in 2004. 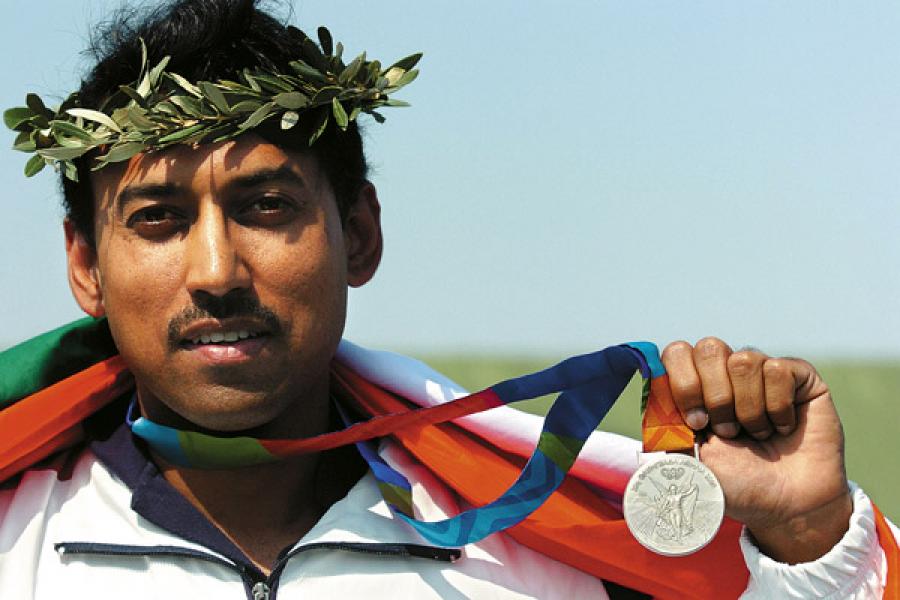 Image: Getty Images
Rajyavardhan Rathore
For India, tennis seemed to be a good bet for a medal. Paes and Mahesh Bhupathi, who had stopped playing the pro circuit together, were still coming together to play for India. In 1996 and 2000 they had lost in the second round, both times to the famous Woodies (the Australian pairing of Todd Woodbridge and Mark Woodforde). Woodforde had retired in 2000, so fingers were crossed for the Indian Express. In the second round they played Swiss legend-in-the-making Roger Federer and Yves Allegro—and won, finally getting beyond their second round jinx. But they lost their semis, and came tantalisingly close in the bronze medal match before losing 14-16 in a marathon third and final set.

But other greatness was afoot. News had trickled in that Rajyavardhan Rathore, an Army clay pigeon shooter who had won two golds at the 2002 Commonwealth Games and a bronze at the World Championships, had made it into the six-man final. Every Indian journalist rushed for the media bus. The competition was just about warming up when we got there. In the medal round’s set of 50 shots, Rathore was at his best. When the dust had settled, he had the second-best score, and had leapt from fifth to second: Silver! Only the second time an Indian had won one.

In the 10m air rifle event, Suma Shirur reached the women’s final but didn’t bag a medal, and a young man called Abhinav Bindra reached the men’s final (placing third in the qualifiers), but slipped to seventh.

Rathore, once the toast of the nation, failed to win more medals. By 2008, he had missed the finals, and in 2012, he has not even made the team.

By 2008, in Beijing, India had begun sniffing medals, though they were still coming in at the rate of one per Games.

But Bindra, just 26, was now a veteran in his third Olympics. The Indian media contingent went into a frenzy when he entered the final, tied for third. Once again we rushed to the venue just in time. In the final, despite reports of alleged tampering with his rifle, Bindra was at his very best. He shot 104.5 (yes, in shooting finals, you can shoot better than 100) and moved from third to the top. India’s first individual gold! And it had only taken 108 years!

As the shy Bindra grappled with his emotions, he was being pulled in different directions. Quite literally too, by Indian officials, including Sports Minister, MS Gill, who miraculously was at his side within seconds of him getting off the podium, and clung to him for quite some time thereafter, through all the media interviews. 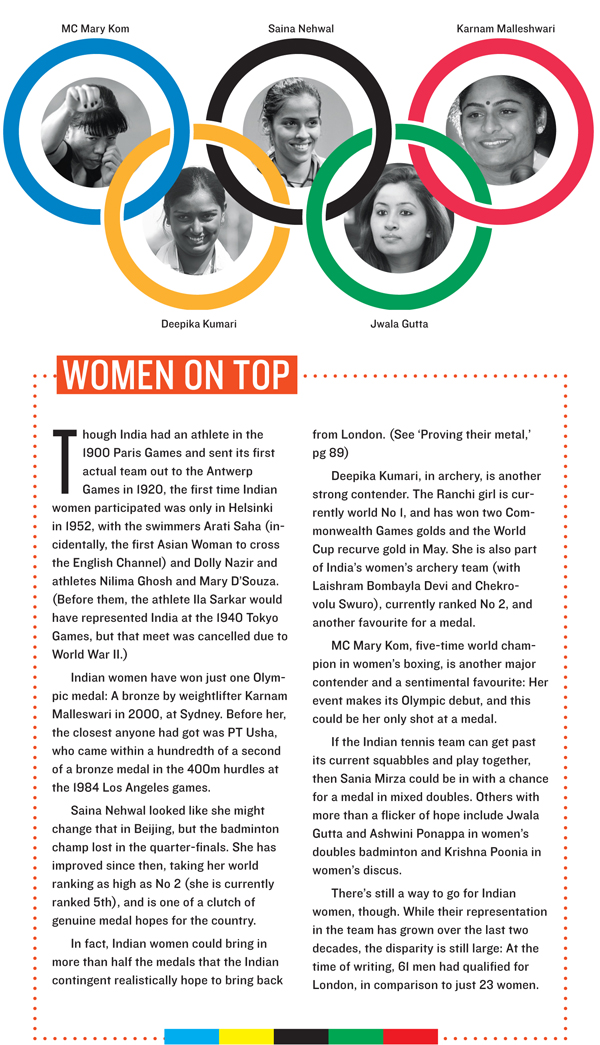 Vijender Singh won India’s first-ever boxing medal, a bronze, after losing in the semis. (In boxing, both losing semi-finalists get bronze.) And wrestler Sushil Kumar, who lost his opening bout, got a lucky break: His conqueror, Ukrainian Andriy Stadnik, reached the final. In wrestling, there is a concept called ‘repechage,’ which is a competition for all those who have lost to either of the two finalists. Written off by the Indian media, who didn’t seem to know about repechage, Sushil began clawing his way back into medal contention, and eventually grappled his way to a bronze.

India finished 50th in the medal tally, with three medals. I had seen three medals in three previous Games, and now it was three in a single Olympics!  What will we bring back from London? See my predictions for this year on next page. I’m expecting that it will be around eight medals. Faster! Higher! Stronger!


Proving Their Metal
Who are India’s medal prospects? V Krishnaswamy, veteran sports journalist, sticks his neck out to make some predictions. 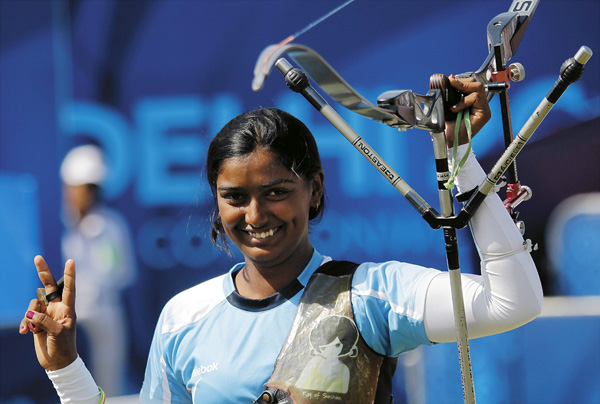 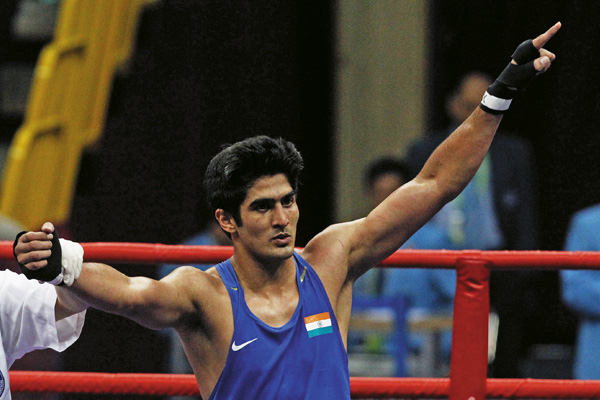 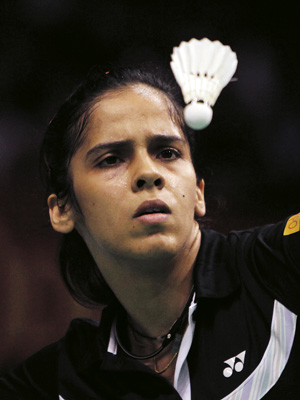