However, even as both sides duel in the Black Sea, the world is wrestling with a global food crisis caused by a Russian naval blockade that is keeping Ukrainian ships from leaving port with millions of tons of grain

By Valerie Hopkins and Marc Santora 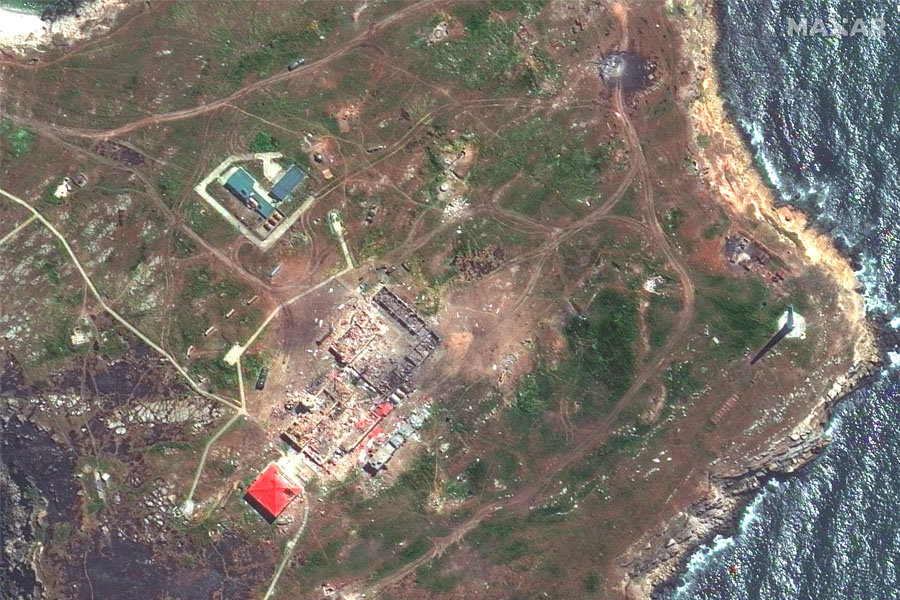 KYIV, Ukraine — As Ukrainian forces launch a renewed assault on Snake Island in the Black Sea, recent strikes suggest that they are using powerful Western anti-ship weapons in an effort to undermine Russian naval domination.

The Ukrainian military’s southern command said late Tuesday that it was using “various forces and methods of destruction” to attack Russian infrastructure on Snake Island, a speck of land south of Odesa that is critical to efforts to control the Black Sea. On Wednesday morning, the military said it had destroyed a Russian air defense system, radar installation and vehicles on the island.

Russia’s defense ministry said it had thwarted the attack, which it said had featured 15 drones and long-range missiles, and was intended to land Ukrainian soldiers on the island. “The unsuccessful fire attack forced the enemy to abandon the landing to Snake Island,” the Russian military said.

The Russians said that “after being convinced that the attempt to seize the island had failed,” the Ukrainians had used long-range anti-ship missiles and drones to attack Russian gas infrastructure facilities in the northwestern part of the Black Sea.

The details of the battle offered by the two sides could not immediately be verified. But Ukrainian officials defended the targeting of Russian offshore drilling infrastructure, saying that Moscow was converting its drilling platforms to military installations by installing high-tech surveillance and communications systems on the rigs.

The current round of fighting around Snake Island appeared to kick off Friday, when the Ukrainians struck a Russian naval tugboat as it was on a mission to deliver weapons and personnel to the island.

Andriy Zagorodnyuk, a former Ukrainian defense minister, said that Ukrainian weapons had hit a former natural-gas rig Monday where Russian forces had placed radio-jamming equipment, blocking Ukraine from getting an accurate picture of the area. Zagorodnyuk said the strikes might be an indication that important naval weapons Ukraine has been seeking from its Western allies had arrived.

The Russians said that the Ukrainian attack on the drilling rig had resulted in an intensive fire and could lead to “an environmental disaster.”

The strikes at sea come amid an intensification of bombardment across southern Ukraine. The Ukrainian military has reported more than two dozen Russian missile attacks in recent days. Serhii Bratchuk, spokesman for the Odesa regional military administration, said a Russian missile barrage on Odesa on Monday had struck targets including a food warehouse and a cemetery.

As both sides duel in the Black Sea, the world is wrestling with a global food crisis caused by a Russian naval blockade that is keeping Ukrainian ships from leaving port with millions of tons of grain.

Snake Island — which covers just 46 acres of rocks and grass — is vital to both the Ukrainians and the Russians. If the Russians have control of the island, a little over 20 miles off the coast, they can control shipping lanes in the northwestern corner of the Black Sea.

After a series of attacks in May by Ukrainian forces in and around Snake Island, Russia has reinforced its outpost there with multiple surface-to-air rocket systems, according to satellite imagery and Ukrainian officials.

Bratchuk said the Russians were trying to turn the garrison on the island into “something that could be the analogue of the warship Moskva.” The Ukrainians sank the Moskva, the flagship of the Russian Black Sea fleet, in April. Although at that time Ukraine had a handful of domestically made anti-ship missiles, called Neptunes, powerful Harpoon systems appear now to be arriving in the country from the West.