A new brand of activists is taking aim at Ukraine war and climate crisis, together

This is a different brand of activist — young, mostly female and mostly from Eastern Europe — who believes that the Ukraine war is a brutal manifestation of the world's dependence on fossil fuels. They have joined two causes — anti-war activism and climate change — to take full advantage of this moment when the world's attention is focused on Ukraine. And to make their case, they confront Europe's leaders face-to-face 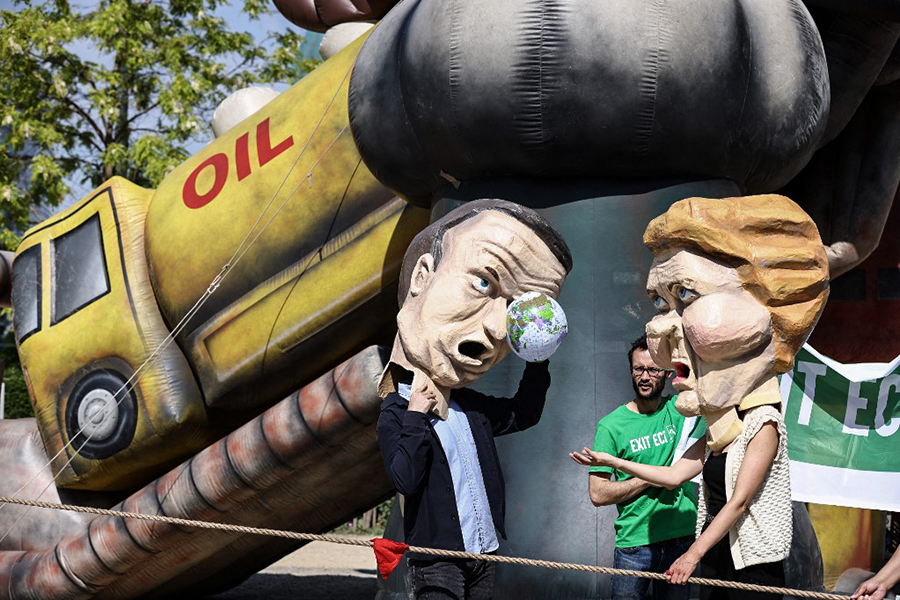 BRUSSELS — Emmanuel Macron, the president of France, had just finished a speech at a major conference on Europe. While he lingered onstage, soaking up adulation and taking pictures with fans, little did he know that two young women in the back of the room were eying him closely.

“There are no metal barriers,” Dominika Lasota whispered. “Now’s our chance.”

She and her activist comrade, Wiktoria Jedroszkowiak, stood up fast. They clicked on a camera. They marched right up to Macron, who greeted them with a charming smile, apparently thinking all they wanted was a selfie.

But then they blasted him with questions about a controversial new pipeline in Uganda (which the French oil company Total is helping build) and the war in Ukraine.

“I know what your point is,” Lasota, 20, said, cutting him off. “But we are living in a climate crisis, and you must stop it.”

Jedroszkowiak, also 20, then jumped in, saying, “You can stop the war in Ukraine by stopping buying fossil fuels from Russia.”

“Yeah,” Macron mumbled, before being broadsided by a bunch of other questions.

Even weeks later — this unfolded in May in Strasbourg, France — the two activists are still giddy about that confrontation. Lasota and Jedroszkowiak have emerged as leaders in a dynamic new wing of the anti-war movement, and the video of them lecturing Macron went viral, making them celebrities for a moment in France and in Poland, where they are from.

This is a different brand of activist — young, mostly female and mostly from Eastern Europe — who believes that the Ukraine war is a brutal manifestation of the world’s dependence on fossil fuels. They have joined two causes — anti-war activism and climate change — to take full advantage of this moment when the world’s attention is focused on Ukraine. And to make their case, they confront Europe’s leaders face-to-face.

They circulate around the Continent, riding trains, staying in cheap hotels, powering themselves on cornflakes and almond milk, trying to corner Europe’s top politicians and business people. While perhaps not as famous as Greta Thunberg, they are cut from the same hardy cloth and work closely with her Fridays for Future movement.

None of these activists were satisfied with the European Union’s recent moves to embargo Russian coal and most Russian oil by the end of the year — they want a total embargo on all Russian energy right now, which they say would starve Russia of billions of dollars and shut down its war machine in eight weeks.

It is an enormous demand with far-reaching consequences that few European politicians dare publicly raise, let alone embrace. Many people the world over believe it is simply not possible to just switch off from fossil fuels. Eighty percent of global energy still comes from them. And Europe is closely tied to Russian fossil fuels in particular, especially natural gas.

But more environmental groups are calling for the same sweeping embargo. They are disturbed by Europe claiming that it stands with Ukraine while it continues to buy billions of dollars of Russian fuel, helping the Russians reap record profits at the same time that their military slaughters civilians and commits other atrocities in Ukraine. Energy experts agree something different must be done.

“The activists are right that Russia’s invasion of Ukraine should be a reminder of the urgency of moving away from fossil fuels,” said Jason Bordoff, a dean of the Columbia Climate School. “But the hard reality is that if Europe wants to eliminate dependence on Russia, it is going to need some alternative sources of oil and gas for a period of time while it transitions.”

Lasota and Jedroszkowiak say the only solution is to accelerate the transition to renewables, like wind and solar, and that until then, more Ukrainians will needlessly die. They have organized protests across Europe and confronted not only Macron but also Mateusz Morawiecki, the Polish prime minister; Roberta Metsola, the president of the European Parliament; top business people, including Total shareholders; and Ursula von der Leyen, the president of the European Commission, who seemed impressed.

Since then, the European Union has held endless meetings about sanctions on Russia. At the end of May, European leaders scheduled another summit in Brussels. Lasota and Jedroszkowiak saw it as the perfect opportunity to “hijack attention.”

They checked into a transit hotel near Brussels’ Midi train station. While Jedroszkowiak sat on the floor of their small room, headphones on, hosting a radio show for a new Polish outlet, Lasota sat at a desk writing an email to Charles Michel, the president of the European Council.

“She’s the cool one and I’m the serious one,” Lasota laughed as she typed away.

“No,” Jedroszkowiak corrected her. “We’re both cool and serious.”

The next morning, at Greenpeace’s office in Brussels, more than a dozen other activists showed up, most in their early 20s, some in their teens. They gathered around a table piled with cereal bowls, coffee cups and glowing laptops.

Their mission: hold a boisterous anti-war event at Schuman Square, in front of the European Commission’s headquarters, on the eve of the big meeting.

Most of the young people gathered around the table were women, which Jedroszkowiak said was no coincidence, either.

“ ‘What’s this pretty young girl doing in the Polish Parliament?’ I’ve been hearing that my whole life. I heard it was I was 14, and I’m still hearing it when I’m nearly 21,” she said. “And when you face that injustice, a rage grows inside you. And you start to see that all these injustices come from the same place: rich men who don’t want to admit they’re wrong.”

“People like to say wars ‘break out,’ ” she continued. “Wars don’t just ‘break out.’ Wars are the result of a political system designed for war.”

Chaos on the Table

The next morning, the day of the big event at Schuman Square, Greenpeace’s front door kept banging open. Young activists brushed past each other, hauling sunflowers, signs and megaphones.

“I’m really excited about all the chaos on the table,” said Pavel Rysula, 17, from Prague. He was one of the few young male activists at the meetings.

But, as with everything, there is a cost.

Both Lasota and Jedroszkowiak recently dropped out of university programs in Warsaw, stressing out their families.

“My mom said she was terrified for me,” Jedroszkowiak said. “I was like, mom, I’m not a drug addict or going to war. Don’t be terrified.”

Lasota said that many childhood friendships simply “disappeared.” One of her friends was so hurt over a missed birthday party that they have not spoken since.

“It will be fine, eventually,” Lasota said with a sigh.

A few hours before the action in front of the European Commission, the skies opened up. People huddled in Brussels’ parks under the eaves of rain-lashed gazebos. Walking through the streets, the protesters got soaked.

When they reached Schuman Square, they found it virtually empty. Still, they carried on, lining up shoulder to shoulder, hoisting their sunflowers and their signs.

“Even if it rains, even if it would snow today, even if there would be a storm today, we would come here,” Lasota belted out, in the rhythms of a veteran orator. “Because we will do everything we can to get this bloody embargo done and stop the horror that is happening in Ukraine and all over the world.”