Germany relies on Russia for about one-third of its oil, and Robert Habeck, the economy minister and vice chancellor, has spent weeks preparing for an embargo, jetting from the United Arab Emirates to Washington to Warsaw, Poland, to line up alternative sources of crude 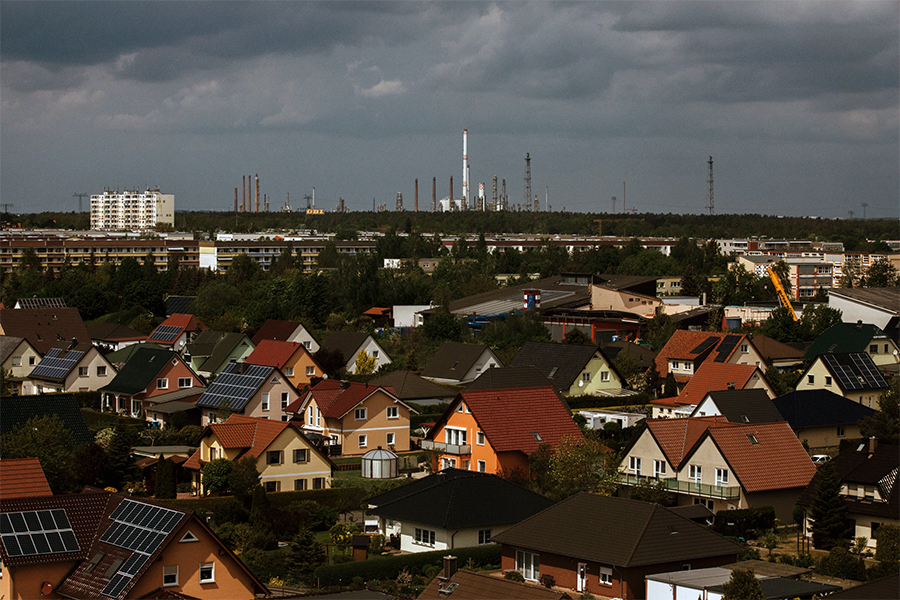 The oil refinery in Schwedt, Germany, on May 13, 2022. Roughly a tenth of the city’s 30,000 inhabitants hold secure union jobs at the refinery and its supporting industries. (Katrin Streicher/The New York Times)

SCHWEDT, Germany — For decades, crude oil piped in from Russia has flowed into a giant refinery in Schwedt, an industrial city on the Oder River in Germany, providing jobs for thousands of workers and a reliable source of gasoline, jet fuel and heating oil for residents of Berlin.

Now, as European Union member states struggle to agree on the terms of an oil embargo to punish Moscow for its invasion of Ukraine, the Schwedt refinery has become the major stumbling block in Germany’s effort to sever its reliance on Russian oil. The prospect has raised alarm among the refinery’s 1,200 employees.

Germany relies on Russia for about one-third of its oil, and Robert Habeck, the economy minister and vice chancellor, has spent weeks preparing for an embargo, jetting from the United Arab Emirates to Washington to Warsaw, Poland, to line up alternative sources of crude.

“The last third is the problem,” Habeck said in a video aimed at explaining the situation to Germans. And most of that Russian oil comes through the refinery in Schwedt.

The refinery is a looming symbol of how deeply Germany’s oil and gas needs are tied to its giant energy exporter to the east. The PCK refinery — the name is a nod to its East German roots as the state-owned “Petrolchemisches Kombinat,” or Petrochemical Combine — is owned by Rosneft, the Russian state-owned oil company. It is connected to the Soviet-era Druzhba pipeline, one of the world’s longest, bringing oil from Siberian wells to Western Europe.

And it remains an essential part of Germany’s energy needs, producing fuels for Berlin — Germany’s largest city — and nearby areas, including parts of Poland. Sourcing enough oil to replace the 12 million tons of crude processed each year in Schwedt — via German and Polish ports to the north — is only one piece of the puzzle, because Rosneft has told German officials it has no interest in operating the refinery using non-Russian oil.

To address that problem, Germany’s parliament last week approved a law that would make it easier for the government to seize essential infrastructure under foreign ownership to prevent a national emergency. Should the oil embargo go through, German officials said the new law would allow Berlin to ensure an adequate supply of oil products until another company could be found to acquire Rosneft’s stake.

Shell, Europe’s largest energy company, which holds a 37.5% stake in PCK, said recently that it would support the refinery, “even at the cost of economic losses in order to maintain supplies to the region.” Last year, Shell sought to sell its stake in the refinery and Rosneft moved to acquire it, but Germany’s economy ministry, which weighs political and strategic aspects of foreign investments, has yet to approve the transaction.

Another energy firm, Alcmene, part of the privately owned British energy holding company Liwathon Group, has expressed interest in investing in Schwedt. “We would be able to deliver security of supply and full utilization of the PCK refinery through German ports” without government subsidies, Alcmene said in an emailed statement.

Chancellor Olaf Scholz has made clear that he was aware of concerns surrounding the refinery, and considered ensuring its future a priority.

“We are looking very closely at how this can actually work out,” he said at a recent meeting of his party in the state of Brandenburg. “We’re also going to make sure that employees aren’t left on their own.”

Fears that layoffs could be around the corner drew hundreds of workers, many dressed in the PCK’s official fluorescent orange and forest green colors, to the company canteen this month for a town-hall-style meeting with Habeck.

Like other regions of the former East Germany, Schwedt experienced widespread job losses after the collapse of communism. Memories of 25% unemployment still haunt the region.

In addition, the refinery is not just a source of oil and income, it is also the core of the city’s identity. After the Soviet Union flattened Schwedt at the end of World War II, the arrival of the oil pipeline — its name, Druzhba, means friendship in Russian — and refinery in the late 1960s drew thousands of workers and their families, lured by secure jobs. PCK’s slogan is: “We move Berlin and Brandenburg!”

Today, roughly one-tenth of the city’s 30,000 inhabitants hold secure union jobs at the refinery and in supporting industries. Many workers used the meeting with Habeck to question the government’s approach.

“Why should we take a business partner that for decades has been reliable and always delivered, and slap them with an embargo?” asked one man who identified himself as having worked at the refinery for 27 years.

“My wish would actually be to keep the Druzhba pipeline out of the embargo entirely,” said another employee, who identified herself as the mother of three young children. “There is no alternative that is profitable.”

Reporters were asked not to identify the employees who spoke during the event, to protect their privacy.

Habeck tried to assure the crowd that the refinery would keep operating. “If everything functions as it would on paper,” crude from Norway or the Middle East could be shipped from the ports of Rostock, Germany, and Gdansk, Poland, both connected to the refinery by pipelines.

At the same time, he acknowledged, there were several points in the process where it could hit a snag.

“We can’t be completely sure about anything that we are doing,” Habeck told the refinery employees. “But at least it has been thoroughly discussed and thought through.”

The city’s mayor, Annekathrin Hoppe, said she would like to set up a campus for startups, incubators and other energy innovators near the refinery to promote the transition to green energy production. But, she said, that would require “sums in the millions or billions.”

Despite all the attention that politicians from Berlin have showered on her city, she said she had yet to see a timeline or any concrete assurances that people would be able to keep their jobs, or any pledges of financial assistance.

“It was a good start,” she said of the past weeks’ flurry of visits. “But it was only a start.”

Tweets by @forbesindia
Srini Srinivasan at Aerospike on technology that can level the data management playing field for startups
Oil, gas firms use Ukraine war to resist climate efforts: report