As Western countries that import Russian hydrocarbons looked for alternatives in order to cut ties with Russia, London-based think tank, InfluenceMap, detected "an active effort from the US oil and gas industry to capitalise on the war in Ukraine" 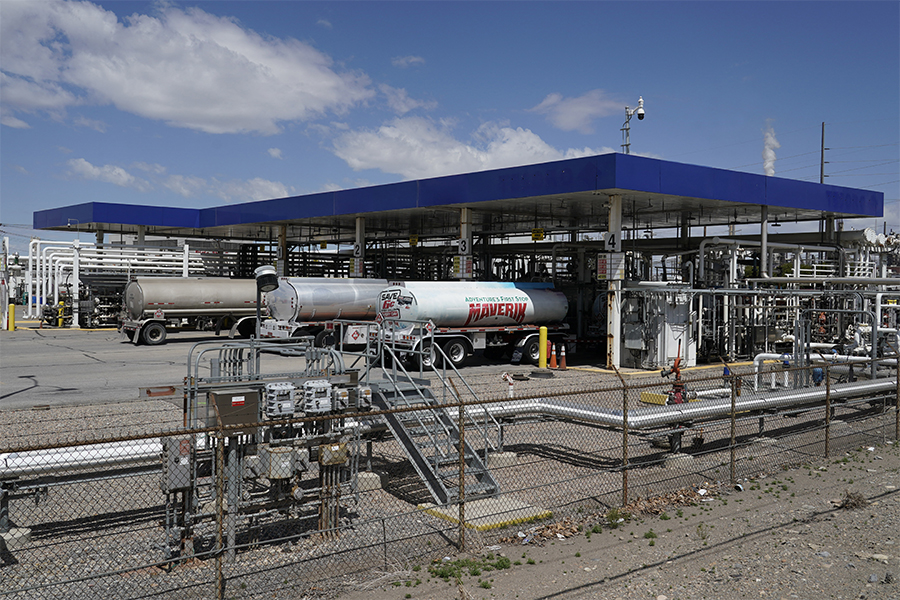 Trucks line up to fill their tankers with gas and diesel to deliver to stations at Marathon Refinery on May 24, 2022 in Salt Lake City, Utah. Reports are saying that gas and diesel prices will continue to rise through the summer driving season. Image: GEORGE FREY / Getty Images via AFP

US oil and gas firms took advantage of energy worries over the Ukraine war to push their fossil fuel products and resist climate change regulatory measures, an analysis showed on Wednesday.
The London-based think tank InfluenceMap analysed advertisements and declarations by the companies in the weeks before and after Russia's invasion of Ukraine on February 24.
It said the companies spread the misleading message that US climate change policies were to blame for rising energy prices and that more US-produced oil and gas was the solution.

As Western countries that import Russian hydrocarbons looked for alternatives in order to cut ties with Russia, InfluenceMap detected "an active effort from the US oil and gas industry to capitalise on the war in Ukraine".
They pushed "long-standing policy asks relating to the continued expansion of oil and gas," despite the widely-documented role such operations play in driving deadly global climate change, InfluenceMap said.
The group identified one of the key players in the messaging effort as the American Petroleum Institute, a lobbying organisation that has numerous major fossil fuel companies among its members.
InfluenceMap said it detected a surge in the number of ads about US-based energy and energy independence placed via one of the API's Facebook pages in the weeks before and after the Russian invasion.
One series of ads received nearly 20 million views on the social platform.

"The sector has quickly mobilised around the war in Ukraine and high gas prices to promote the need for more 'American-made energy', often relying on potentially misleading or questionable claims," InfluenceMap Program Manager Faye Holder said in the report.
It also analysed public statements by oil and gas executives, finding that several of them publicly blamed climate change policies or promoted US-produced energy as part of the solution to the energy crisis.
The report documented cases where it said the sector had succeeded in securing some of its demands since the invasion, such as a commitment by authorities to speed up approvals for new gas projects.
Many posts by users on social media have blamed a surge in gasoline and crude oil prices on US President Joe Biden's decisions to limit drilling and to halt the Keystone XL pipeline project as part of his low-carbon energy transition plan.
Biden's March 8, 2022 announcement of a ban on Russian oil imports did lead to a jump in prices.
But analysts told AFP in March that swings in energy prices in 2022 were due to a variety of factors, including a rebound in economic activity following the Covid-19 pandemic.