Energy markets are jittery as Russia-Ukraine tensions drag on

Russia produces 10 million barrels of oil a day, roughly 10% of global demand, and is Europe's largest supplier of natural gas, a critical fuel for power plants and for heat 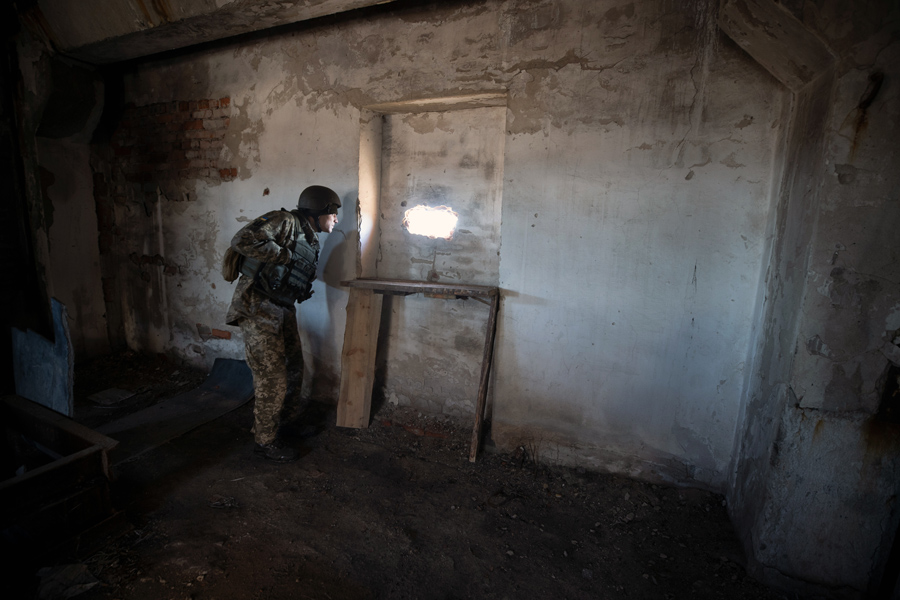 A Ukrainian Army soldier keeps a lookout from a front line position in Krasnohorivka, Ukraine, on Monday, Feb. 14, 2022. The biggest immediate energy threat from a Russian invasion would be Russian natural gas exports through Ukrainian pipelines that flow to Europe. (Tyler Hicks/The New York Times)

A Russian invasion of Ukraine could drive up already high oil and natural gas prices, prolonging elevated inflation around the world and dealing a blow to any country dependent on Russia for energy.

Oil and gas prices have been marching upward for months as exporting countries such as Libya have struggled with production problems and demand has rapidly recovered after two years of the pandemic. But all of that pales in comparison to what could happen if a war in Eastern Europe and potential Western sanctions on Russia curtail that country’s production, analysts said.

Russia produces 10 million barrels of oil a day, roughly 10% of global demand, and is Europe’s largest supplier of natural gas, a critical fuel for power plants and for heat.

The United States is not a big importer of Russian oil — it gets about 700,000 barrels a day, or roughly 3% of its demand. But even Americans would be hurt because the price of the commodity is set in global markets.

Nobody quite knows what Russian President Vladimir Putin intends to do in Ukraine, and most analysts agree that a war would hurt his country as much as the rest of the world, if not more, given the Russian economy’s dependence on energy. Yet, by simply amassing tens of thousands of troops near the Ukrainian border, Putin has created the kind of threat to the global energy market that the world hasn’t seen since the end of the Cold War.

“Governments had hoped that these days were over,” said David Goldwyn, who was a leading U.S. State Department energy diplomat during the Obama administration. “No one was gaming for a cutoff of Russian oil and gas to the global market.”

Oil prices have risen to well over $90 a barrel — their highest levels since 2014 — in recent days as fears of war have grown. Many energy experts say an invasion would easily propel the price above $100 a barrel. The average price for regular gasoline in the United States has risen to nearly $3.50, a rise of almost 20 cents over the past month and nearly $1 more than a year ago, according to AAA. Diesel prices have been rising a penny a gallon every day recently.

Higher fuel prices hurt rural and working class consumers the most because they spend a larger percentage of their incomes on energy and because they typically drive longer distances in less fuel-efficient cars. For every penny that a gallon of regular gasoline rises, it costs American consumers $4 million a day, according to Tom Kloza, global head of energy analysis for Oil Price Information Service.

“We are going to push the envelope with inflation that infiltrates every nook and cranny of the economy,” Kloza said. “I’m most worried about diesel. It doesn’t provoke a public outcry like gasoline, but it can be a silent killer of commerce and profits.”

Oil markets rose about 2% on Monday. They eased early in the day as traders took note of reports that Russian officials remained willing to negotiate a potential settlement before climbing again in the afternoon. European natural gas prices rose about 6%.

The biggest immediate threat from an invasion would be Russian natural gas exports through Ukrainian pipelines to Europe. If the gas stopped flowing, many Europeans could struggle to heat their homes. Utilities might have to cut back electricity production and factories might have to close early. Putin could also seek to further increase pressure on the West by restricting oil exports to Europe.

Those moves would, of course, hurt Russia, and make the economic sanctions promised by the Biden administration and its allies all the more punitive. That threat may turn out to be the primary reason Putin eventually looks for a compromise.

There are reasons to hope an energy crisis could be averted. The United States has been producing more oil in recent weeks, and the Biden administration is working on efforts to revive a nuclear deal with Iran that would release as much as 1 million barrels a day on the world market.

The European winter has been relatively mild, and the wind is blowing far stronger than last year, easing pressure on the wind power sector. Further, the Biden administration has had some success in sending more liquefied natural gas to Europe by persuading Japan and other Asian consumers to forgo some shipments.

But global oil production has not kept up over the last year with the growth of demand despite the lingering pandemic. The output of several members of OPEC has declined, and there have been production interruptions outside the cartel, including in Ecuador and Kazakhstan, because of natural disasters and political turmoil. Renewed political tension could also tip Libya back into civil war, which could put at risk 300,000 barrels of production or more.

The recent jump in gasoline prices comes at a time of year when people tend to drive less. To some energy experts, that is a worrisome because a seasonal upswing in prices is not that far away.

“Not only are oil prices up, but the bulk of the nation is starting the multimonth transition to summer gasoline, further adding to the rise at the pump,” said Patrick De Haan, head of petroleum analysis at GasBuddy, a technology company that tracks fuel prices.

A diplomatic settlement, of course, would relieve the pressures and energy prices would go down.

“Average prices in 2022 could be lower than 2021 with more supplies from the United States and the Gulf, including Iran,” said René Ortiz, a former secretary-general of OPEC and former oil minister in Ecuador. “That is the best scenario, and I think diplomacy will prevail. It would be crazy for Putin to invade.”

Tweets by @forbesindia
Timeline: YouTube through the years since 2005
Hosting the Olympics is costly. For China, it's worth every billion