Can Joe Biden avert a crisis with North Korea?

Heavy sanctions imposed by President Joe Biden's two immediate predecessors have not pushed Kim any closer to giving up his nuclear weapons program, and a critical element usually coupled with sanctions— diplomacy—has so far been missing from Biden's approach 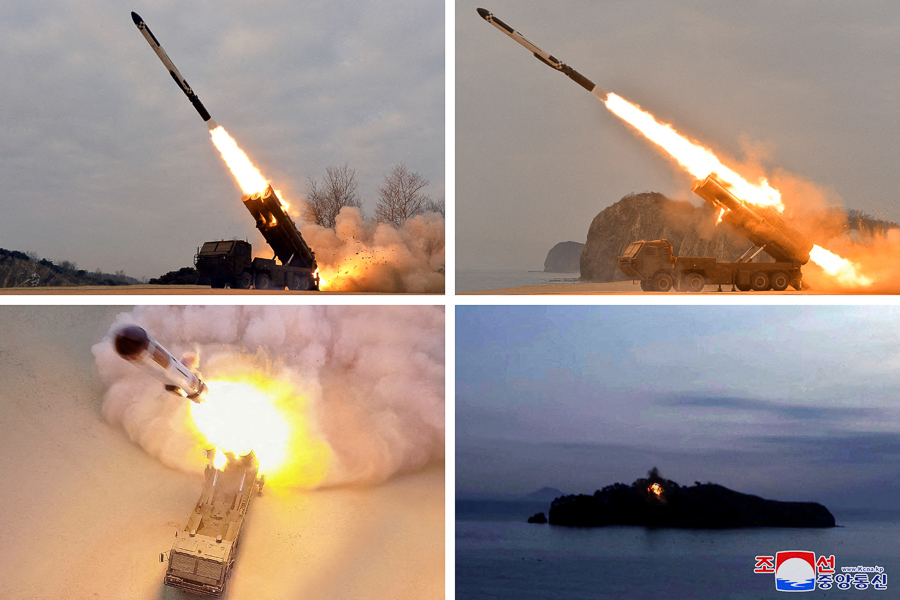 WASHINGTON — After North Korea ushered in the new year with four sets of ballistic missile tests this month, the Biden administration turned to a well-thumbed page in the Washington playbook: It called for more United Nations sanctions.

China and Russia blocked the proposal last week in the U.N. Security Council. And Kim Jong Un, the leader of North Korea, appears unfazed by the threat of more U.N. and Treasury Department sanctions — he fired off two cruise missiles Tuesday and two more ballistic missiles Thursday, for a total of six weapons tests this month, equal to the number for all of last year.

“This is a deeply isolated, autarkic economy,” said John Delury, a professor of history at Yonsei University in Seoul, South Korea. “No amount of sanctions could create the pressures that COVID created in the last two years. Yet, do we see North Korea begging and saying, ‘Take our weapons and give us some aid?’ The North Koreans will eat grass.”

Heavy sanctions imposed by President Joe Biden’s two immediate predecessors have not pushed Kim any closer to giving up his nuclear weapons program, and a critical element usually coupled with sanctions — diplomacy — has so far been missing from Biden’s approach, analysts say.

Efforts in Washington to get North Korea to halt its nuclear weapons program fell into a lull after Kim and President Donald Trump met in Hanoi, Vietnam, in 2019. The next year, North Korea closed itself off to the world after the coronavirus pandemic began. The nation conducted relatively few weapons tests during that period, and Kim disappeared from public view for a month before emerging in June looking much thinner.

Biden appeared content to keep North Korea on the back burner, even though President Barack Obama told Trump in November 2016 that North Korea should be Washington’s top national security priority. Biden has yet to name a candidate to be ambassador to South Korea. The special envoy for North Korea, Sung Kim, is a veteran diplomat who has dealt with these issues before, but he is doing the job part-time — he is also ambassador to Indonesia.

The administration’s foreign policy bandwidth has been occupied by other crises — Afghanistan, Ukraine, Iran — but it appears Kim now wants in on the action.

“We’re at the start of something, and we just need to cross our fingers,” said Robert Carlin, a former U.S. intelligence analyst on North Korea.

North Korean scientists have obviously been working on the weapons program, which is central to Pyongyang’s propaganda and Kim’s main leverage in negotiations with the United States and other nations. The more weapons Kim has and the more powerful they are, the greater his stature both inside and outside North Korea.

In the first two tests this month, Pyongyang launched short-range ballistic missiles with what it called “hypersonic” gliding vehicles, detachable warheads that are harder to intercept because they can change course in midflight.

Siegfried Hecker, a nuclear scientist at Stanford University who has visited North Korea, estimated the country very likely has enough nuclear material for about 45 warheads, an increase of about 20 since the end of the Obama administration. He also gave an upper-end number of 60.

After a Jan. 19 Politburo meeting of the ruling Workers’ Party of Korea, the North Korean news agency reported Kim had ordered officials to “promptly examine the issue of restarting all activities that had been temporarily suspended,” a reference to possibly ending a moratorium on the testing of nuclear devices and intercontinental ballistic missiles that Kim had imposed since his historic summits with Trump.

Moon Chung-in, chairman of the Sejong Institute in Seoul and a former adviser to President Moon Jae-in (no relation) of South Korea, said that if the Biden administration takes the standard sanctions-as-deterrence route, “such cautious, reactive and inertia-driven moves will not be able to prevent Pyongyang’s assertive behavior, and the Korean Peninsula will be swept into the vortex of provocation, countermeasures and escalation.”

Moon said Biden needed to announce that he was personally ready to engage with North Korea, as Trump did, and be willing to put everything on the negotiation table, including relaxation of sanctions and a suspension of military exercises between the United States and South Korea. The South Korean government has also pushed the United States to try “vaccine diplomacy.”

The Biden administration concluded a policy review of North Korea last year. It has rejected the overt pro-engagement actions favored by Seoul and that Trump eventually embraced, while avoiding Trump’s early threats of “fire and fury.”

Ned Price, the State Department spokesperson, said Tuesday that “dialogue and diplomacy is the most effective means to help us reach that overarching goal, and that’s the complete denuclearization of the Korean Peninsula.” He has also said the United States is ready to talk to North Korea “without preconditions.”

The department said in a statement that it would “consult closely with the Republic of Korea, Japan, and other allies and partners about how to best engage” with North Korea.

But the leaders of those two East Asian nations are divided in their approach and remain embroiled in bitter disputes over separate issues of history and war. Japanese officials are critical of Moon’s North Korea policy. In November, Wendy Sherman, the deputy secretary of state and an experienced negotiator on North Korea and Iran, hosted a meeting with her South Korean and Japanese counterparts in Washington, but long-running hostilities resulted in an awkward news conference.

One of the biggest dilemmas is how to work with China to curb North Korea’s weapons program. The Chinese leader, Xi Jinping, and his colleagues are balancing various goals: They want to end the disruption caused by Kim’s weapons while also seeking to avoid a failed state on their border or Pyongyang growing close to Washington or Seoul. A congressional report released Monday said, “Any Sino-U.S. cooperation on North Korea’s denuclearization will remain constrained by Beijing’s unwillingness to rupture its relationship with Pyongyang completely and lose leverage over North Korea’s foreign policy decisions.”

Tweets by @forbesindia
India is home to 420 million online gamers, second highest after China
Our top reads of the week