While these cases are about starkly different issues, they both feature privileged middle-aged men under fire for their behaviour, raising age-old questions of class, entitlement and double standards 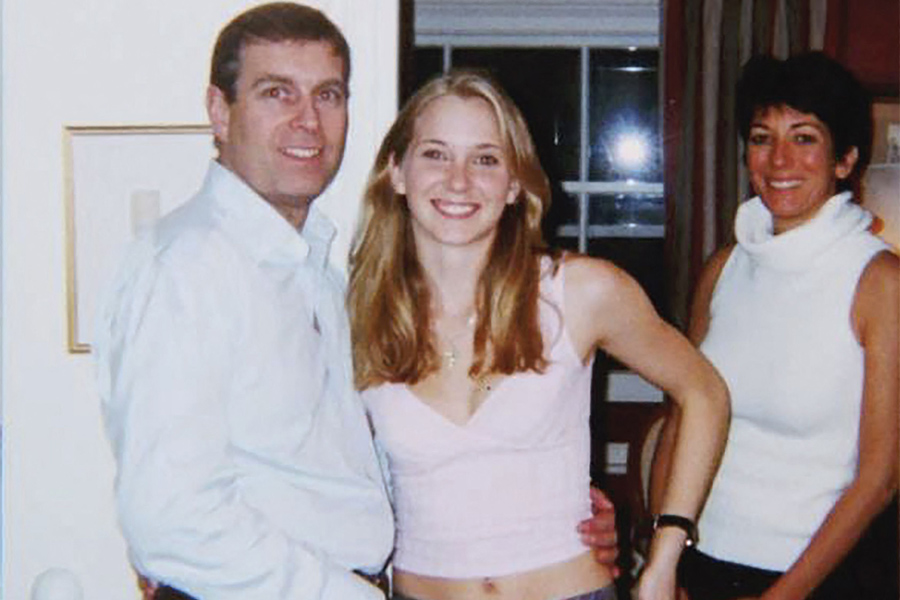 In an undated image provided by federal prosecutors, Prince Andrew with Virginia Giuffre, who accuses him of raping her as a teenager, and Ghislaine Maxwell. As Giuffre’s lawsuit against Andrew proceeds, Buckingham Palace has announced that it would force Andrew to relinquish all his military titles and the honorific, “His Royal Highness.” (Southern District of New York via The New York Times)

LONDON — When Prime Minister Boris Johnson of Britain was hospitalized with COVID in April 2020, the alarming news bulletin came soon after a televised address by Queen Elizabeth II in which she reassured the British public that after the pandemic ebbed, “We will meet again.”

Stoic, dignified and comforting, the queen’s words helped anchor the country during the fretful days that followed — not the first time the monarchy has acted as a stabilizing force for the government during tumultuous events.

This week, however, both of these grand British institutions pitched simultaneously into crisis. On Wednesday, Johnson admitted attending a garden party not long after he had recovered from the virus, which violated lockdown rules and set off a chorus of calls for him to resign. Hours later, a federal judge in Manhattan rejected a bid by the queen’s second son, Prince Andrew, to throw out a sex abuse lawsuit against him.

On Thursday, Buckingham Palace announced that it would force Andrew to relinquish all his military titles and the honorific, “His Royal Highness.” He “is defending this case as a private citizen,” the palace said in a terse statement that underscored the finality of the prince’s exile from royal life.

While these cases are about starkly different issues, they both feature privileged middle-aged men under fire for their behavior, raising age-old questions of class, entitlement and double standards.

“Boris Johnson and Prince Andrew,” Alastair Campbell, a former communications director for Prime Minister Tony Blair, said in a Twitter post. “What an image the world is getting of Global Britain.”

Campbell was involved in a now-celebrated episode in which a more stable government helped a monarchy in crisis: In 1997, he and Blair, a popular Labour leader coming off a landslide election victory, persuaded the queen to strike a more empathetic tone in reacting to the death of Princess Diana in a car crash. That defused a growing tide of resentment against the monarch.

“Normally,” Campbell said, “they avoid crises at the same time.”

Commentators said, half in jest, that the legal ruling against Andrew, 61, helped Johnson, 57, because it deflected attention from his grilling in the House of Commons, where opposition lawmakers accused him of lying and demanded that he resign. But both men are at the mercy of forces largely out of their control.

Johnson has asked lawmakers to defer judgment on him, pending the results of an internal investigation into Downing Street’s parties by a senior civil servant, Sue Gray. If she determines that Johnson misled Parliament in his previous statements, it will almost certainly cost him his job.

Andrew, by failing to win the dismissal of a suit brought by Virginia Giuffre, faces the prospect of damning disclosures in depositions of him and Giuffre, who claimed he raped her when she was a teenager. She says she was trafficked to Andrew by his friend, convicted sex predator Jeffrey Epstein. Andrew flatly denies the charge and has said he has no recollection of meeting Giuffre.

What the two cases have in common, critics said, is a lack of accountability on the part of the main actors.

Johnson, in apologizing for the party, acknowledged the anger that the public would feel “when they think in Downing Street itself the rules are not being properly followed by the people who make the rules.” But he insisted that he viewed the gathering as a “work event” — one that he attended for only 25 minutes — an alibi that placed the blame on his subordinates who organized the gathering.

Andrew has not commented on his legal setback. But he and his lawyers have maneuvered to avoid confronting Giuffre’s accusations at a trial. He scrambled to avoid being served with legal papers in Britain. His lawyers tried to get the case dismissed on jurisdictional grounds and, most recently, on the basis of a settlement agreement between Giuffre and Epstein.

With so much at stake, especially in a year in which the queen is celebrating 70 years on the throne, royal watchers speculate that Andrew will seek his own settlement with Giuffre. Who would pay that settlement and with what money are already questions being asked by British newspapers.

Buckingham Palace’s announcement that it would remove Andrew’s military titles and deny him “His Royal Highness” suggests he has no path to rehabilitate himself. It is the kind of ruthless action that Conservative Party lawmakers have yet to take against Johnson, despite their frustration with him.

As a constitutional monarch, the queen will steer clear of any questions about Johnson’s political future — or of politics in general. But that does not mean she is without influence. Legal experts say the monarchy, because of its longevity and constancy, can have a moderating effect on the most extreme forces in politics.

“The monarchy acts as a ‘balance wheel,’ in the sense of being an institution that, when political actors have tipped the ship of state too far in one direction, can tip it back in the other,” said Harold Hongju Koh, an American legal scholar who is a visiting professor at the University of Oxford this year.

It is a delicate balance. In late 2019, Johnson came under criticism for asking the queen to approve his government’s suspension of Parliament, a move that Britain’s Supreme Court later ruled unlawful because it was designed to squelch debate over his plans to pull the country out of the European Union.

Unlike in April 2020, when the queen sent an ailing Johnson her best wishes, she is almost certain to remain silent about his current plight. If anything, her disciplined adherence to social distancing rules — captured most poignantly when she grieved alone in a choir stall at the funeral of her husband, Prince Philip, last year — is a vivid contrast to the prime minister’s after-work socializing.

Tweets by @forbesindia
The Taliban have staffing issues. They are looking for help in Pakistan
Global firms fall short on forest protection vows: Report