On Tuesday, lawyers for the queen's second son, Prince Andrew, asked a federal judge to throw out a lawsuit by Virginia Roberts Giuffre, in which she says that Andrew, a friend of late financier and convicted sex offender Jeffrey Epstein, raped her when she was 17 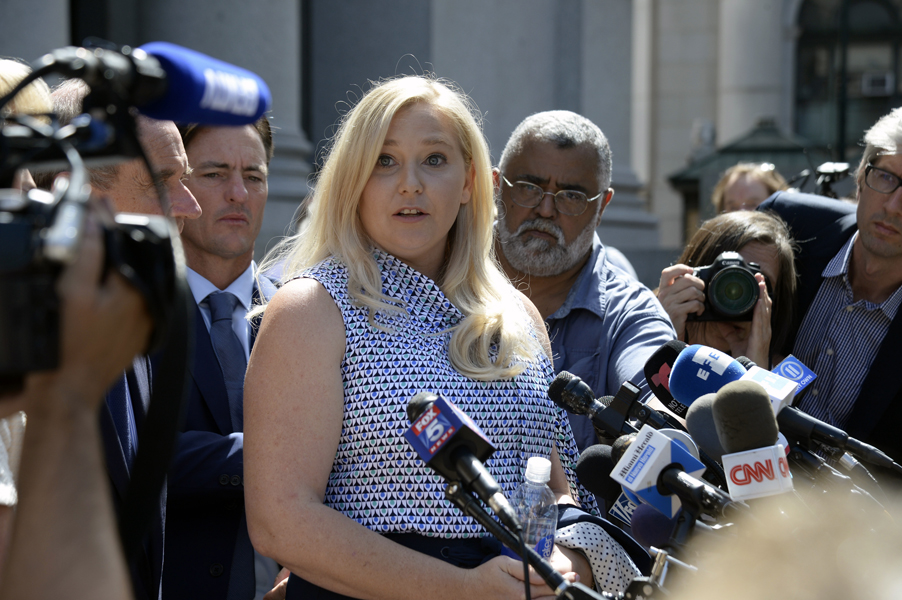 Virginia Roberts Giuffre speaks to reporters in New York on Aug. 27, 2019. If a judge allows her case to go forward, Prince Andrew could face damaging testimony from her about his alleged abuse. (Jefferson Siegel/The New York Times)

LONDON — Queen Elizabeth II will mark 70 years on the throne in February, a milestone unmatched by any British sovereign and a chance to turn the page on three years of ceaseless turmoil in the royal family. But a sexual abuse lawsuit unfolding in a New York courtroom could yet spoil her celebration.

On Tuesday, lawyers for the queen’s second son, Prince Andrew, asked a federal judge to throw out a lawsuit by Virginia Roberts Giuffre, in which she says that Andrew, a friend of late financier and convicted sex offender Jeffrey Epstein, raped her when she was 17.

It was the latest in a skein of legal maneuvers by the prince’s lawyers to defuse Giuffre’s case. While the judge, Lewis A. Kaplan, did not immediately rule on the motion, leaving Andrew’s legal fate unsettled for now, the hearing dramatized the shadow that the 61-year-old prince still casts over his family.

If the judge allows the case to go forward, Andrew could face damaging testimony from Giuffre about his alleged abuse of her at Epstein’s residences in New York and in the Caribbean. That would plunge the House of Windsor back into scandal at the very moment it hopes to use the Platinum Jubilee to remind Britons of the queen’s extraordinary longevity and largely blemish-free record of service.

The 70-minute hearing gave a glimpse into the kinds of issues that could spill out in a prolonged trial. At one point, Andrew’s lead lawyer, Andrew B. Brettler, argued that Giuffre had not been specific in her allegations against him. Kaplan replied that she said she had been subjected to “involuntary sexual intercourse” and asked what was not clear about that.

“If the case drags on and on and on, yes, it will be a thorn in the side of the Platinum Jubilee,” said Dickie Arbiter, who was a press secretary to the queen from 1988 to 2000. Beyond the fraught issues raised in that case, he said, were the lingering questions stirred by the rift between the family and Prince Harry and his U.S.-born wife, Meghan.

Harry, the queen’s grandson, plans to publish a memoir late in 2022, which has unsettled people around the royal family who fear further unflattering details about what the estranged prince and Meghan have said was callous and racist treatment at the hands of members of the royal family.

Andrew’s woes, by contrast, are largely of his own making, royal watchers point out, the product of his association with the disgraced Epstein and another friend, Ghislaine Maxwell, who was convicted last week of conspiring with Epstein to recruit, groom and abuse underage girls. Giuffre contends that she was among those victims; Andrew denies her claim that she was trafficked to him.

The queen has already largely banished Andrew from public life, a process that gained momentum after a calamitous interview he gave the BBC in November 2019, in which he tried to explain his friendship with Epstein and denied the allegations of sexual misconduct, saying he had no memory of meeting Giuffre. He no longer appears at public events or even military ceremonies, and the British media’s coverage of him is uniformly scathing.

When photographers capture Andrew’s image — often at the wheel of a car coming or going to visit his mother — he appears a graying, weary shadow of the once-dashing helicopter pilot who beguiled the country with his service in the Falklands War and his busy bachelorhood.

“My gut feeling is that most people have lost interest in him,” said Penny Junor, a royal historian. “He’s arrogant and not particularly popular. Since he’s gone past middle age, there’s been a general sense of ‘What’s he for?’”

In one respect, however, Andrew could remain a lingering problem, Junor said. The queen has not stripped him of his honorary military titles, some of which he inherited from his father, Prince Philip, who died last year. That has prompted objections from veterans, who say it is unseemly to be under the command of a person facing such allegations.

Andrew’s reputation, critics say, has not been helped by his legal maneuvering. Rather than confronting the allegations directly, the prince scrambled to avoid being served with legal papers in Britain. His lawyers have tried to get the case dismissed on jurisdictional grounds and, most recently, on the basis of a settlement agreement between Giuffre and Epstein.

Under the terms of that 2009 agreement, unsealed Monday, Epstein paid Giuffre $500,000 to resolve a lawsuit in which she accused him of sexually abusing her when she was a teenager. Giuffre, in turn, agreed to release Epstein and other “potential defendants” from further litigation, a category that Andrew’s lawyers said included him.

But Giuffre’s lawyer, David Boies, argued in court that Andrew was not a target of the allegations of sexual trafficking made by Giuffre in 2009. Hence, he is not protected under the terms of the settlement. “He was someone to whom the girls were trafficked,” Boies told the judge. “He’s not a potential defendant.”

While Kaplan did not indicate how he was leaning in whether to dismiss the case, he pointedly allowed the process of gathering evidence to continue. That will keep the legal pressure on Andrew. And it will make for a tense start to the Platinum Jubilee year for the queen, who has already been struggling with health problems that have kept her out of public view since October.

The queen, royal watchers note, has been steadfast in her affection for Andrew, even as his public reputation has withered. Having gone along with sidelining her son — a step that was pushed by her eldest son and heir, Prince Charles — some doubt that she would strip Andrew of his titles.

“The queen gives and the queen takes away, but she’d probably be reluctant to take this away because that’s all he got left,” Arbiter said. “She is the head of state and head of the nation, but at the end of the day, she’s also his mother.”