By Mark Landler and Stephen Castle 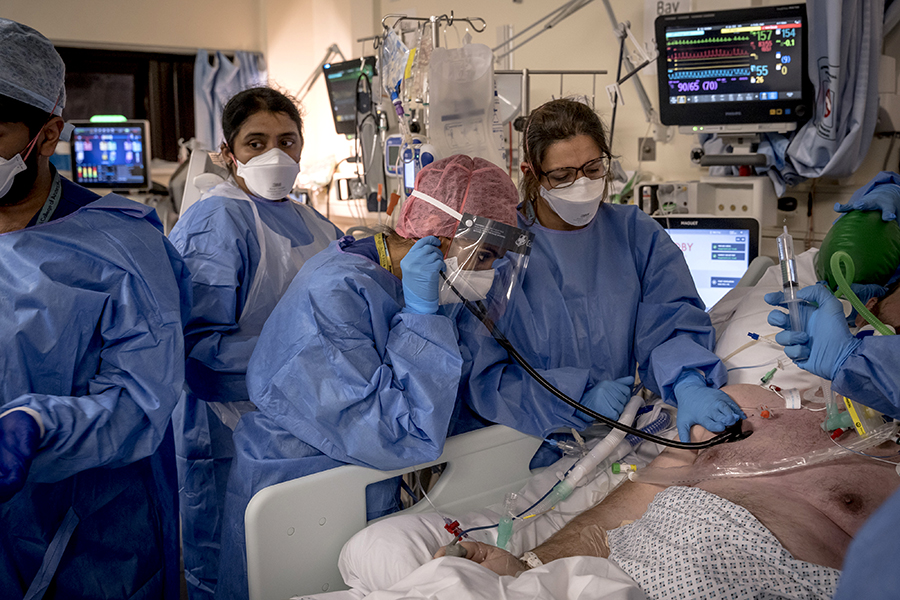 Listening to the lungs of a COVID patient on Jan. 16, 2021, at Homerton Hospital in London. Protection from two shots of AstraZeneca, the most widely used vaccine in Britain, drops from 88 percent after one month to 74 percent after four to five months, according to an analysis of a study by Tim Spector, a professor of genetic epidemiology at King’s College London; Image: Andrew Testa/The New York Times

For the past four months, Britain has run a grand epidemiological experiment, lifting virtually all coronavirus restrictions, even in the face of a high daily rate of infections. Its leaders justified the approach on the grounds that the country’s rapid rollout of vaccines had weakened the link between infection and serious illness.Now, with cases, hospital admissions and deaths all rising again; the effect of vaccines beginning to wear off; and winter looming, Britain’s strategy of learning to live with the virus is coming under its stiffest test yet.New cases surpassed 50,000 on Thursday, an 18% increase over the past week and the second time cases have broken that psychological barrier since July. The number of people admitted to hospitals rose 15.4% over the same period, reaching 959, while 115 people died of COVID-19, an increase of almost 11%.“Everything is hitting us at once,” said Tim Spector, a professor of genetic epidemiology at King’s College London who has been leading a major study of COVID-19 symptoms. “My view is that we’re in a no man’s land.”The sudden resurgence of the virus is a rude jolt for a country that believed it had put the worst of the pandemic behind it. After a remarkably successful vaccine deployment and a characteristically British resolve to get on with it, Britons have been brought up short, vexed by a virus that isn’t ready to relinquish its grip.At issue is the core trade off British officials made last summer: they decided they could tolerate a widely circulating virus as the price of reopening the economy, so long as only a small fraction of infected people ended up in the hospital.That laissez-faire approach has been watched by the United States and other European countries as a possible model for how to plot a way out of the pandemic. Britons have enjoyed a return to normalcy unseen in the rest of Europe, packing nightclubs, theaters, and sports stadiums — with face masks few and far between.The percentage of infected people who are later hospitalized is still much lower now than it was during the last peak of the pandemic in January, about 2% compared with 9%. But the National Health Service is already feeling the strain, and with fears of a virulent flu season, hospitals face the prospect of a double-whammy this winter.There is also evidence that more vaccinated people are getting infected, a shift from a few weeks ago, when the bulk of infections occurred in schoolchildren, according to Spector’s Zoe COVID Study. The government sent students back to school in September largely unvaccinated and without requiring them to wear face masks.“This problem, which was mainly confined to students, is now moving up the generations,” Spector said. “The makeup of the infected is a mix of young, unvaccinated people and older, vaccinated people.”That, he said, mostly reflects the waning efficacy of the vaccines, which were rolled out earlier in Britain than in most other large countries and so are wearing off earlier. Nearly 80% of people 12 and older in Britain have received two shots of a vaccine, but most older people got their shots six months ago or earlier.The protection from two shots of AstraZeneca, the most widely used vaccine in Britain, drops from 88% after one month to 74% after four to five months, according to an analysis by the Zoe study.Prime Minister Boris Johnson has rejected calls to reimpose measures, like making masks compulsory in indoor spaces, or to impose new measures, like vaccine passports for mass gatherings — a practice that France and other European countries have adopted.

Instead, the government is urging those eligible for booster shots, particularly the elderly and other vulnerable groups, to sign up for them, trying to jump-start a rollout that has had little of the speed or urgency of the vaccine deployment last winter.On Thursday Johnson said that “the numbers of infections are high but we are within the parameters of what the predictions were,” adding, “we are sticking with our plan.”A day earlier, Johnson’s health minister, Sajid Javid, warned that the number of cases could soar to 100,000 a day in coming weeks, repeating a warning that he first issued in July when the government lifted most of the social-distancing restrictions in a heavily promoted move that Britain’s tabloids named “Freedom Day.”When cases dropped rather than rose in the days after the measures were lifted, to the surprise of many public health researchers, it appeared to vindicate the government’s strategy. That was during the summer, however, when the weather was warmer, schools were not in session and vaccine protection was higher.Britain’s daily number of infections is now triple that of Germany, France and Spain combined. These countries have caught up to, and in some cases, surpassed Britain, in the proportion of people vaccinated. That has prompted many public health experts to urge the government to reconsider its aversion to restrictions.“We’re running way ahead of Europe,” said Devi Sridhar, head of the global public health program at the University of Edinburgh. “We should be moving to Plan B, which is where much of Europe already is.”The government’s Plan B remains on the back burner for now. From the start of the pandemic, Johnson has been reluctant to impose restrictions. His stance is reinforced by pressure from a group of influential lawmakers in his Conservative Party, known as the COVID Recovery Group, who argue that there are wider costs to society from draconian limits on economic or social activity.Though the government still recommends wearing masks in crowded spaces, lawmakers have reinforced the impression that normal life has returned by discarding them. At the Conservative Party’s conference earlier this month, almost nobody wore a mask, and they are rarely spotted in the House of Commons.After Javid was challenged on the issue at a news conference Wednesday, some of his colleagues put on masks the next day. But on London’s subway and other public places, they are less and less in evidence.Having taken credit for normalizing life, Johnson has found it hard to reverse course. Downing Street now hopes that a midterm school vacation will drive down infection rates. It also plans a publicity campaign, using the slogan, “Get vaccinated, get boosted, get protected,” to urge people to get booster shots and to remind them of the continuing dangers of the virus.“The rollout of the boosters has been very disappointing,” said David King, a former chief scientific adviser to the government. “What the British government has done is to sit back and say, ‘We can’t control this, so let’s just let this spread.’ ”With he and other experts calling for tougher measures, many expect Johnson will soon yield and implement his Plan B for the winter. That would mean making masks mandatory in some settings, urging people to work from home where possible and requiring them to show proof of their vaccination status to enter nightclubs and other public gatherings (Scotland and Wales have already imposed similar measures).Critics say that this conforms to a familiar pattern. “The government is doing what the government has done all along: dithered and delayed and not really confronted the issues,” said Gabriel Scally, a visiting professor of public health at the University of Bristol and a former regional director of public health.The government, he said, had failed to produce a convincing strategy to curb infections. There had been little effort to equip office buildings with better ventilation or to urge the public to wear face coverings in crowded spaces and use higher quality masks.“They don’t have a strategy to get the virus under control and take the pressure off the NHS,” Scally said. “They have put all their eggs in the vaccine basket and those eggs are not hatching.”