News of a shortfall comes amidst a bitter dispute over supplies between London and the European Union, and a veiled threat from the bloc to use "whatever tool" is necessary to make sure Europe gets its "fair share of vaccines." 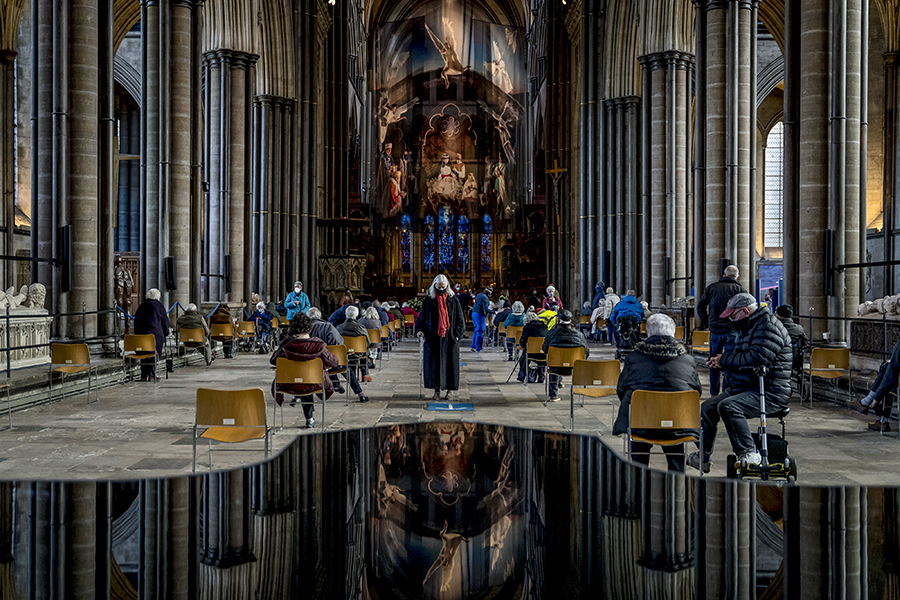 Salisbury Cathedral, where a temporary vaccination center is treating about 1000 people a day, in Salisbury, England, Jan. 23, 2021. Scarcity has forced Britain to push back plans to start vaccinating those under 50, a delay underscoring the growing fears of vaccine nationalism.
Image: Andrew Testa/The New York Times

LONDON — Britain’s speedy COVID-19 vaccination program has been dealt a blow by a delivery delay of millions of doses ordered from India, a setback that illustrates the fragility of global supplies and underscores fears that an exit from the pandemic could be hampered by vaccine nationalism. News of a shortfall that will slow the British vaccine roll out came amid a bitter dispute over supplies between London and the European Union, and a veiled threat from the bloc to use “whatever tool” is necessary to make sure Europe gets its “fair share of vaccines.” Although the death toll from COVID-19 in Britain now exceeds 125,000, the government of Prime Minister Boris Johnson has outpaced the rest of Europe with a vaccination program that has already provided first doses to more than 25 million people. But that giddying pace is set to slow as a result of the delay in the delivery of about 4 million doses from India, underscoring the extent to which even successful vaccination programs are at the mercy of supply chains. That delay, and a technical issue with a separate batch of 1.7 million doses from an undisclosed supplier, has pushed back plans to start vaccinating those under age 50 until May, a month later than many had expected. Given the breakneck start to its vaccination program, Britain’s government said it was confident of hitting a target of reaching the most vulnerable people and all those over 50 by mid-April, and all adults by the end of July. Still, on Thursday, there was a marked change of tone from the health secretary, Matt Hancock, who on Wednesday had brushed aside concerns about vaccine supplies. “In the last week, we have had a batch of 1.7 million doses delayed because of the need to retest its stability,” Hancock told lawmakers without specifying the source of the doses, “and we have a delay in the scheduled arrival from the Serum Institute of India.” In April, Britain will concentrate on completing vaccinations of those 50 and above, and those who have medical conditions, as well as administering a second shot to 12 million people who were the first to be treated. That is a priority because the second injection needs to be done within 12 weeks of the first inoculation, Hancock said. “The problem at the moment is that there is no spare capacity, every single factory that could possibly turn out a vaccine is working 24 hours, seven days a week to try and do that, but inevitably there are problems,” said Jeremy Farrar, director of the Wellcome Trust, a global charitable foundation and a scientific adviser to the British government. What must be avoided is “this idea of export controls and nationalism,” Farrar said. “Contracts need to be honored,” he added. Holding that line looks increasing hard. Adar Poonawalla, CEO of the Serum Institute of India, told the BBC that his company had been permitted to export 50% of the 95 million doses of the AstraZeneca vaccine it produces. “Having said that, the government wanted to scale up its vaccination drive, they needed the maximum volumes they could get from us,” he said. “And that is why I had to send out a message to all our partners that were expecting more doses in these two to three months only that they would be facing a few delays.” In a statement, the company said that “5 million doses had been delivered a few weeks ago to the U.K., and we will try to supply more later, based on the current situation and requirement for the government immunization program in India.” At a news conference Thursday, Johnson was careful not to criticize the Indian government, saying that it “hasn’t stopped any export, there is a delay,” something he attributed to “various technical reasons.” The shortfall in supply, he added, would not require any change to Britain’s cautious plan to ease lockdown restrictions gradually over the coming months. Closer to home, the British government is embroiled in a war of words with Ursula von der Leyen, president of the European Commission, the executive body of the 27-nation European Union, who said that though the bloc allows much of its vaccine production to be exported, it sees little coming in the other direction, particularly from Britain. “It is hard to explain to our citizens why vaccines produced in the EU are going to other countries that are also producing vaccines, but hardly anything is coming back,” said von der Leyen, adding that Britain was “the country No. 1 as far as exports from the EU is concerned,” with 10 million doses exported there in recent weeks. Von der Leyen, who is facing fierce criticism for Europe’s sluggish vaccination campaign, said that in the past six weeks, the bloc exported 41 million doses of vaccines to 33 countries. “But open roads run in both directions,” she said in what was a clear warning to Britain, asking for “reciprocity.” To complicate the picture, 20 European nations have paused partially or completely use of the AstraZeneca vaccine — some supplies of which are produced in Britain — over safety fears. Doubts about the AstraZeneca vaccine have proved a headache for the authorities since they emerged in Norway after a small number of those who received the vaccine experienced blood clots. Jeremy Hunt, a former British health secretary, criticized European politicians over the suspensions. It was “incredibly dangerous to make threats to the supplies of vaccines and components, alongside casting aspersions on their safety at the very moment when vaccines are the only way the world is going to get out of our COVID straitjacket,” he said. The European Medicines Agency, which regulates medicines in the bloc, said Thursday that the AstraZeneca vaccine was “safe and effective,” and that its benefits far outweigh its risks. European nations will decide individually whether to resume AstraZeneca shots, and at the news conference Johnson said he expected to be given the jab Friday.

Tweets by @forbesindia
Bhaskar Menon, who turned Capitol records around, dies at 86
The commodity cycle has turned. Will the momentum sustain?