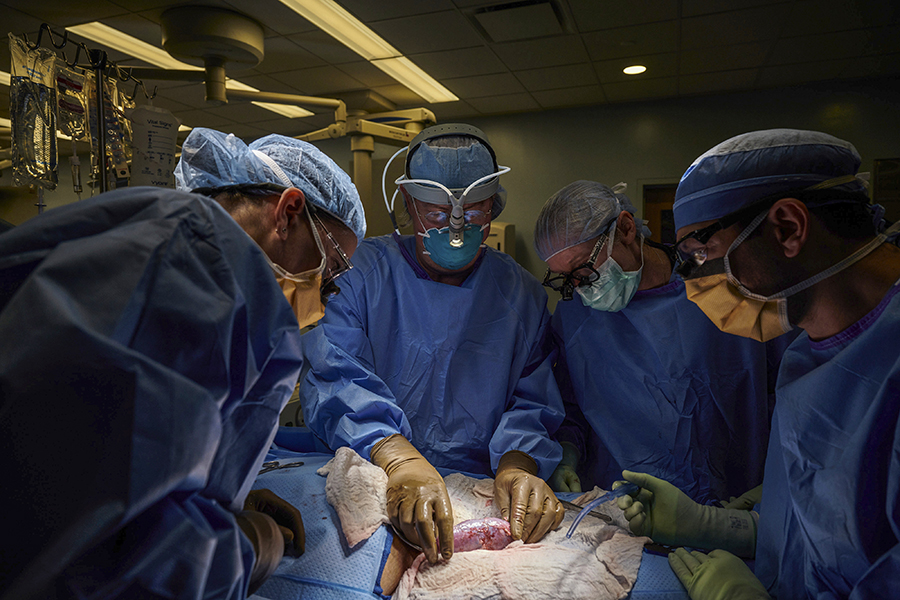 A photo provided by NYU Langone Health shows a surgical team at the hospital in New York examining a pig kidney attached to the body of a deceased recipient for any signs of rejection in September 2021. From left are Drs. Zoe A. Stewart-Lewis, Robert A. Montgomery, Bonnie E. Lonze and Jeffrey Stern. Image: Joe Carrotta/NYU Langone Health via The New York Times

Surgeons in New York have successfully attached a kidney grown in a genetically altered pig to a human patient and found that the organ worked normally, a scientific breakthrough that one day may yield a vast new supply of organs for severely ill patients. Researchers have long sought to grow organs in pigs that are suitable for transplantation into humans. Technologies like cloning and genetic engineering have brought that vision closer to reality in recent years, but testing these experimental organs in humans has presented daunting ethical questions.

So surgeons at NYU Langone Health took an astonishing step: With the family’s consent, they attached the pig’s kidney to a brain dead patient who was kept alive on a ventilator, and then followed the body’s response while taking measures of the kidney’s function. It is the first operation of its kind.
The researchers tracked the results for just 54 hours, and many questions remained to be answered about the long-term consequences of such an operation. The procedure will not be available to patients any time soon, as there are significant medical and regulatory hurdles to overcome.

Still, experts in the field hailed the surgery as a milestone.

“This is a huge breakthrough,” said Dr. Dorry Segev, a professor of transplant surgery at Johns Hopkins School of Medicine who was not involved in the research. “It’s a big, big deal.”

A steady supply of organs from pigs — which could eventually include hearts, lungs and livers — would offer a lifeline to the more than 100,000 Americans on transplant waiting lists, including the 90,240 who need a kidney. Twelve people on the waiting lists die each day.

An even larger number of Americans with kidney failure — more than a half-million — depend on grueling dialysis treatments to survive. In large part because of the scarcity of human organs, the vast majority of dialysis patients do not qualify for transplants, which are reserved for those most likely to thrive after the procedure.

The surgery was first reported by USA Today on Tuesday. The research has not yet been peer-reviewed nor published in a medical journal.

The transplanted kidney was obtained from a pig genetically engineered to grow an organ unlikely to be rejected by the human body. In a close approximation of an actual transplant procedure, the kidney was attached to blood vessels in the patient’s upper leg, outside the abdomen.

The organ started functioning normally, making urine and the waste product creatinine “almost immediately,” according to Dr. Robert Montgomery, the director of the NYU Langone Transplant Institute, who performed the procedure in September.

Although the kidney was not implanted in the body, problems with so-called xenotransplants — from animals like primates and pigs — usually occur at the interface of the blood supply and the organ, where human blood flows through pig vessels, experts said.

The fact that the organ functioned outside the body is a strong indication that it will work in the body, Montgomery said.

“It was better than I think we even expected,” he said. “It just looked like any transplant I’ve ever done from a living donor. A lot of kidneys from deceased people don’t work right away, and take days or weeks to start. This worked immediately.”

Last year, 39,717 U.S. residents received an organ transplant, the majority of them — 23,401 — receiving kidneys, according to the United Network for Organ Sharing, a nonprofit that coordinates the nation’s organ procurement efforts.

Genetically engineered pigs “could potentially be a sustainable, renewable source of organs — the solar and wind of organ availability,” Montgomery said.

The prospect of raising pigs to harvest their organs for humans is bound to raise questions about animal welfare and exploitation, though an estimated 100 million pigs already are killed in the U.S. each year for food.

“Pigs aren’t spare parts and should never be used as such just because humans are too self-centered to donate their bodies to patients desperate for organ transplants,” said a statement from the organization People for the Ethical Treatment of Animals, or PETA.
Among transplantation experts, reactions ranged from cautiously optimistic to ebullient, though all acknowledged the procedure represented a sea change.

While some surgeons speculated that it could be just months before genetically engineered pigs’ kidneys are transplanted into living humans, others said there was still much work to be done.

“This is really cutting-edge translational surgery and transplantation that is on the brink of being able to do it in living human beings,” said Dr. Amy Friedman, a former transplant surgeon and chief medical officer of LiveOnNY, the organ procurement organization in the greater New York area.

The group was involved in the selection and identification of the brain dead patient receiving the experimental procedure. The patient was a registered organ donor, and because the organs were not suitable for transplantation, the patient’s family agreed to permit research to test the experimental transplant procedure.

Friedman said she envisioned using hearts, livers and other organs grown in pigs, as well. “It’s truly mind-boggling to think of how many transplants we might be able to offer,” she said, adding, “You’d have to breed the pigs, of course.”

Other experts were more reserved, saying they wanted to see whether the results were reproducible and to review data collected by NYU Langone.

“There’s no question this is a tour de force, in that it’s hard to do and you have to jump through a lot of hoops,” said Dr. Jay A. Fishman, associate director of the transplantation center at Massachusetts General Hospital.

“Whether this particular study advances the field will depend on what data they collected and whether they share it, or whether it is a step just to show they can do it,” Fishman said. He urged humility “about what we know.”

While he called the surgery “a watershed moment,” he warned that long-term rejection of organs occurs even when the donor kidney is well-matched, and “even when you’re not trying to cross species barriers.”

The kidney has functions in addition to clearing blood of toxins. And there are concerns about pig viruses infecting recipients, Klassen said: “It’s a complicated field, and to imagine that we know all of the things that are going to happen and all the problems that will arise is naive.”

Xenotransplantation, the process of grafting or transplanting organs or tissues between different species, has a long history. Efforts to use the blood and skin of animals in humans go back hundreds of years.

In the 1960s, chimpanzee kidneys were transplanted into a small number of human patients. Most died shortly afterward; the longest a patient lived was nine months. In 1983, a baboon heart was transplanted into an infant girl known as Baby Faye. She died 20 days later.

Pigs offered advantages over primates for organ procurement — they are easier to raise, reach maturation faster, and achieve adult human size in six months. Pig heart valves are routinely transplanted into humans, and some patients with diabetes have received pig pancreas cells. Pig skin has also been used as temporary grafts for burn patients.

The combination of two new technologies — gene editing and cloning — has yielded genetically altered pig organs. Pig hearts and kidneys have been transplanted successfully into monkeys and baboons, but safety concerns precluded their use in humans.

“The field up to now has been stuck in the preclinical primate stage, because going from primate to living human is perceived as a big jump,” Montgomery said.

The kidney used in the new procedure was obtained by knocking out a pig gene that encodes a sugar molecule that elicits an aggressive human rejection response. The pig was genetically engineered by Revivicor and approved by the Food and Drug Administration for use as a source for human therapeutics.

Montgomery and his team also transplanted the pig’s thymus, a gland that is involved in the immune system, in an effort to ward off immune reactions to the kidney.

After attaching the kidney to blood vessels in the upper leg, the surgeons covered it with a protective shield so they could observe it and take tissue samples over the 54-hour study period. Urine and creatinine levels were normal, Montgomery and his colleagues found, and no signs of rejection were detected during more than two days of observation.
“There didn’t seem to be any kind of incompatibility between the pig kidney and the human that would make it not work,” Montgomery said. “There wasn’t immediate rejection of the kidney.”

The long-term prospects are still unknown, he acknowledged. But “this allowed us to answer a really important question: Is there something that’s going to happen when we move this from a primate to a human that is going to be disastrous?”