Several months ago, Kim issued a rare warning that the North faced a "tense" food situation, brought about by the coronavirus pandemic and international sanctions against his nuclear weapons program 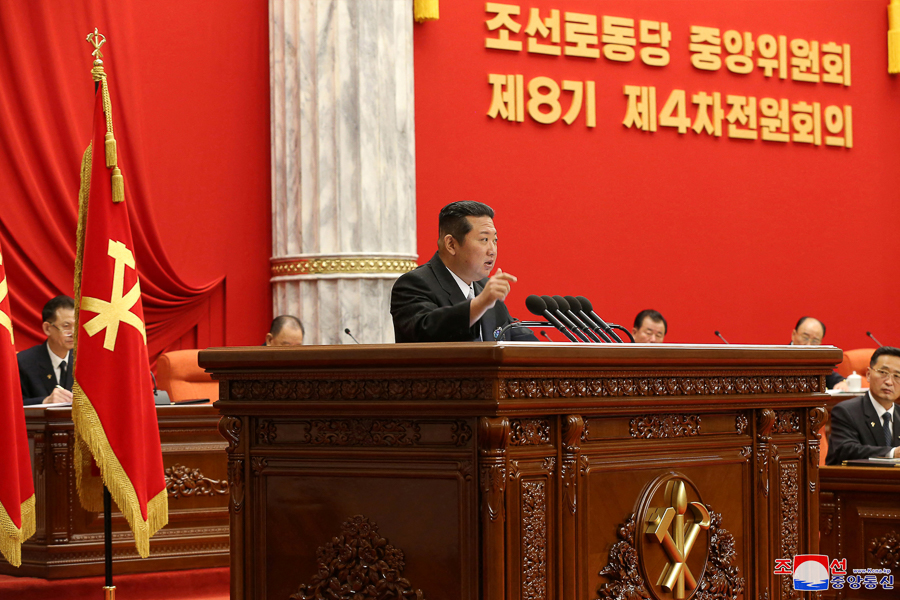 North Korean leader Kim Jong Un chairs a session of the 4th plenary meeting of the 8th Central Committee of the Workers' Party of Korea (WPK), in this photo released on December 29, 2021 (Korean Central News Agency via REUTERS)

SEOUL — Kim Jong Un has begun his second decade as North Korea’s leader with a vow to alleviate the country’s chronic food shortages, state media reported on Saturday — a problem that he inherited from his late father 10 years ago and has yet to fix.
Kim, 37, presided over a five-day meeting of North Korea’s ruling Workers’ Party, ​which drew more attention than usual because it came at the end of his first decade in power.
On ​Saturday, New Year’s Day, the North’s state media carried lengthy reports on the meeting. They mentioned no diplomatic overtures from Kim toward the United States or South Korea, and only a brief reiteration of his frequent promise to increase the North’s military power. But much space was devoted to the subject of food shortages, which many analysts see as the biggest shortcoming of Kim’s leadership.
One of the first promises that Kim made after inheriting power from his father, Kim Jong Il, a decade ago was that long-suffering North Koreans would “never have to tighten their belt again.” But that goal has remained elusive. Several months ago, Kim issued a rare warning that the North faced a “tense” food situation, brought about by the coronavirus pandemic and international sanctions against his nuclear weapons program.

At the party meeting that ended on Friday, Kim pledged to “increase the agricultural production and completely solve the food problem,” specifying production goals “to be attained phase by phase in the coming 10 years,” the North’s Korean Central News Agency said.
But Kim did not appear to introduce any significant agricultural measures​, except to forgive all cooperative farms’ debts to the government. He mainly repeated the party’s old exhortations to farmers to use more machines, greenhouses, fertilizers and pesticides. He also said they should “grasp the greatness and gratitude for the party, state and the social system” and make “collectivism dominate their thinking and life.”
Despite his ambitions to grow North Korea’s economy, Kim has never made the kind of bold, market-oriented changes that ​China and Vietnam put in place decades ago. Instead, he has kept the country isolated, cracking down on the influence of outside information and imposing tight control on the informal markets that many North Koreans have ​relied on for survival.
“Kim Jong Un was never going to be a reformer by Western standards,” said Leif-Eric Easley, a professor of international studies at Ewha Womans University in Seoul. “He prioritizes his family interests above national security, prosperity and the rule of law, to say nothing of human rights.”
When Kim came to power a decade ago at 27, many outside analysts dismissed him as an inexperienced figurehead, and some predicted that he would not last. But he quickly established his grip on power through what South Korean officials called a “reign of terror,” executing scores of senior officials — including his uncle, Jang Song Thaek — who were seen an obstacles to establishing a monolithic dictatorship.
Under Kim’s rule, North Korea has become one of the very few countries that can threaten the United States with a nuclear missile. Of the six nuclear tests the North has carried out, four were under his watch.
Kim’s government has also tested three intercontinental ballistic missiles that it claims could deliver nuclear warheads to part or all of the United States. As the North’s nuclear threat grew in 2018 and 2019, President Donald Trump met three times with Kim, in the first summit talks between the two nations.
But North Koreans have paid a harsh price for Kim’s nuclear ambitions.
The United Nations imposed economic sanctions that banned all of the North’s major exports. The country’s economy shrank by 3.5% in 2017 and by 4.1% in 2018, according to estimates from South Korea’s central bank. It recovered slightly in 2019, but then the pandemic hit, forcing the North deeper into isolation. Its economy shrank again in 2020, by 4.5%.
Kim’s efforts to get the sanctions​ lifted collapsed in 2019, when his diplomacy with Trump ended with no agreement. At a Workers’ Party congress in January, Kim admitted that his efforts to rebuild the North’s moribund economy had failed.
There are no signs that North Korea is in danger of the kind of devastating famine that it suffered in the late 1990s. But its grain production totaled ​only ​4.69 million tons this year, leaving a shortage of 800,000 tons, according to estimates released by South Korea’s Rural Development Administration. In July, the U.S. Department of Agriculture ​estimated that ​16.3 million people in the North — 63.1% of the population​ — were “food insecure.”
​In the past, North Korea has made up for its agricultural shortfalls with foreign aid and imports. But in response to the pandemic, it has rejected outside aid and shut its borders, making it harder to import fertilizers or farm equipment from neighboring China​, the North’s only major trading partner and donor​. Pandemic restrictions have also hurt the country’s unofficial markets, which helped circulate food.
Kim’s emphasis on bolstering food production indicates that North Korea will stick to his “self-reliant” economic policy while it copes with the pandemic, analysts say. The North has also braced for a prolonged diplomatic confrontation with Washington since Kim’s diplomacy with Trump collapsed.
North Korea has claimed that it had no COVID-19 cases, and it has rejected offers of millions of vaccine doses, leaving its population vulnerable to explosive outbreaks should its borders reopen. It has also rejected the Biden administration’s repeated offer to resume dialogue “without preconditions,” insisting that Washington must first end what the North calls its “hostile policy,” including the sanctions and its joint military exercises with South Korea.
At the same time, North Korea has resumed missile tests since 2019, showing that it continues to develop increasingly sophisticated, nuclear-capable weaponry — Kim’s most valuable leverage against Washington.
During the party meeting, Kim said conditions demanded that “bolstering the state defense capability be further powerfully propelled without a moment’s delay.” He also called it a “top priority” to tighten loopholes in the North’s campaign against the pandemic.
“His extremely cursory mention of inter-Korean relations and foreign policy indicates that North Korea was not ready to come out for contacts with South Korea or the United States in the new year,” said Cheong Seong-chang, director of the Center for North Korean Studies at the Sejong Institute outside Seoul.
“Faced with the pandemic, North Korea is expected to continue to keep its borders shut, focusing on self-reliance and conducting only the minimum of essential trade with China,” Cheong said.

Tweets by @forbesindia
Rajeev Shah at Celona on how 5G could enable a cloud paradigm for the physical world
22 For 2022: Of omicron and unicorns