North Korean weapons are likely here to stay, even if Biden won't say it

Estimates are that the North has at least 45 nuclear weapons, and appears headed to an arsenal roughly the size of Pakistan's, another nuclear state the US once demanded must disarm, and now has all but given up that it ever will 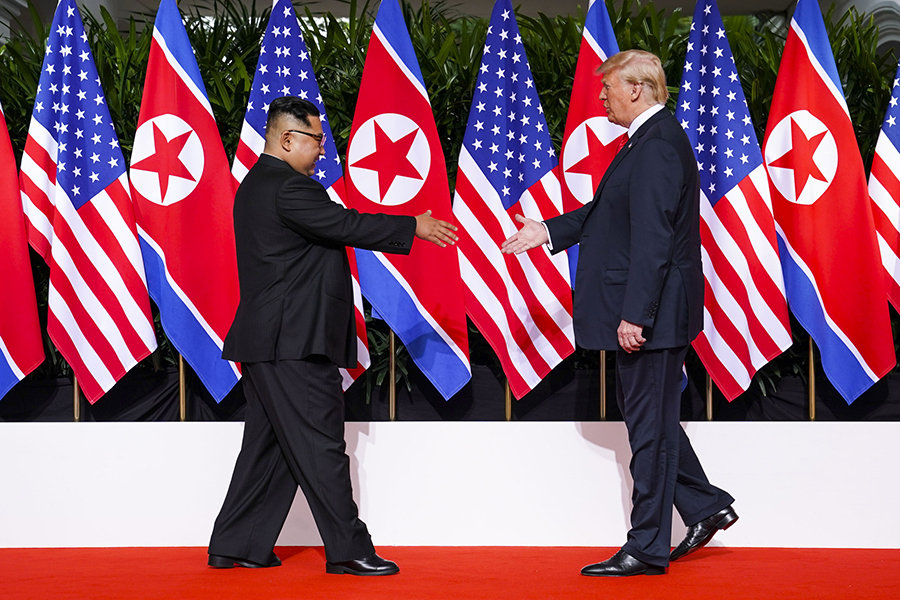 Just weeks after President Joe Biden took office, North Korea sent a subtle message to the new administration: It switched on key parts of its nuclear fuel production plant in Yongbyon, the aging complex where the country’s nuclear weapons program was born four decades ago.

North Korean officials knew the heat signatures from their radiochemical laboratory would light up American satellites overhead and make it into the President’s Daily Brief, even if it was not clear whether the move was a deceptive fake or a sustained new round of production.

“It’s part of the playbook,” said Victor Cha, who released an analysis of the images for the Center for Strategic and International Studies. “It says we are here to stay.”

The staying power of Pyongyang’s nuclear arsenal highlights an uncomfortable truth for Biden as he prepares to greet President Moon Jae-in of South Korea at the White House on Friday. Moon has said denuclearization of the Korean Peninsula is a “matter of survival” for his country, and he has called on Biden to revive negotiations.

But North Korea’s arsenal of nuclear weapons and its stockpile of fuel have roughly doubled in the past four years, a steady rise that proceeded even as President Donald Trump held high-drama meetings with Kim Jong Un, the North Korean leader. The best unclassified estimates are that the North has at least 45 nuclear weapons, and appears headed to an arsenal roughly the size of Pakistan’s, another nuclear state the United States once demanded must disarm, and now has all but given up that it ever will. For the North, that has always been a model to follow.

In private, officials in the Biden administration admit they harbor no illusions that North Korea will ever give up the entirety of its program. Yet, like his predecessors, Biden has made the decision not to officially acknowledge the North as a nuclear state, aides say.

It is a little like pretending that the New York Yankees do not play baseball. But maintaining the myth has a purpose, for both the United States and South Korea.

Any official acknowledgment that the North Korean arsenal is here to stay would revive the long-simmering debates about whether U.S. allies like South Korea and Japan can depend on the American nuclear umbrella — essentially a security net for countries that do not have nuclear weapons of their own.

Robert J. Einhorn, a former State Department official who was long a nuclear expert for the agency, said a formal acknowledgment that North Korea is a nuclear state would “increase interest by South Korea and Japan in acquiring their own nuclear weapons” and “damage the global nonproliferation regime.” So he said he expected the administration would use the visit to “reaffirm complete denuclearization” as the ultimate goal, “even if it privately doubts that goal will ever be achieved.”

For months now, the Biden administration has been engaged in a North Korean strategy review, often in consultation with South Korea and Japan. But it has offered little detail in public about its conclusions, other than to avoid trying a grand bargain with Kim that Trump did. Instead of trying to wrap a peace treaty formally ending the Korean War, the promise of a new relationship between Pyongyang and Washington, and a sweeping disarmament plan into one package, it will turn back to small, confidence-building steps.

If that seems like a familiar, step-by-step approach, it is — past presidents, including George W. Bush and Barack Obama, tried similar strategies. Agreements were reached, and sometimes facilities were destroyed — notably the cooling tower for a nuclear reactor at Yongbyon, which was blown up in front of CNN cameras. It was all for show — the facilities were rebuilt, and the North Koreans kept on producing nuclear material.

Moon’s meeting is the second in-person visit of a world leader to the White House. He was crucial in arranging the summits between Trump and Kim, and has continued to encourage dialogue between Washington and Pyongyang. While at the White House, he is expected to reiterate those goals, while emphasizing with Biden a series of South Korean investments in the United States in semiconductors and batteries for electric cars — ways of deepening the technological alliance at a moment of heightened competition with China.

The result is that Biden is not likely to dwell much on North Korea, at least in public, Cha said.

“They will change the topic,” he said.

And officials in the Biden administration have made clear they are not interested in giving Kim the satisfaction of being the center of attention, as he was during his dramatic meetings with Trump in Singapore, in Hanoi, Vietnam, and at the Demilitarized Zone.

But the Biden White House has not thrown out all of Trump’s diplomacy.

The White House says it wants to build on the “Singapore declaration,” which called for a new relationship between the United States and North Korea, a permanent peace plan, complete denuclearization and a full accounting of soldiers missing in action from a war that ended nearly seven decades ago.

The document is only one page, and it is not specific about how to achieve those objectives. Trump, speaking in Singapore in June 2018, told reporters that the relationship with Kim would make all the difference. “Honestly, I think he’s going to do these things,” he said.

For the most part, Kim has failed to follow through, though he has maintained a promised moratorium on long-range missile tests and made some progress on the return of remains. But the fact is that Kim did not dismantle a single weapon, and the nuclear production program sped up.

In the past several years, Pyongyang roughly doubled its supplies of fuel that can be turned into nuclear weapons, according to analysts. It did so mainly at the Yongbyon complex, where the nuclear program began in the 1960s. Today, the site’s many hundreds of industrial buildings cover an area of more than 3 square miles.

“The policies of the past three presidents have failed,” Hecker said in an email. “Unless the Biden team changes course, North Korea will continue to expand the size, sophistication and reach of its nuclear arsenal.”

In size, experts say, the North’s stockpile of nuclear arms is fast approaching those of India, Pakistan and Israel — relatively small members of the club who are seen as deploying about 100 or so weapons, whereas the big players have thousands. That is the model the North is pursuing: No one expects any of those countries to give up their nuclear arsenals.

In a recent report, Brad Roberts, a Pentagon official in the Obama administration who now directs global security research at the Livermore weapons laboratory in California, said the North overall had achieved an important new stage — that of “a heavily armed nuclear state with intercontinental reach.”

Barring war or leadership change, he added, Pyongyang’s “nuclear weapons appear to be here to stay.”

On Trump’s watch, new missiles also came to life. In 2017, Pyongyang for the first time successfully test-fired two kinds of intercontinental ballistic missiles — both, in theory, able to drop warheads on the United States. In June 2018, Kim told Trump that he would stop testing his long-range missiles and nuclear arms. So far, he has kept those promises.

But Kim has also proceeded to introduce new generations of shorter-range missiles, capable of targeting South Korea, Japan and U.S. forces based in the two countries.

During the Trump years, experts were able to look at satellite images at 16 of Pyongyang’s missile bases, which were much camouflaged. They found inconspicuous patterns of growth that suggested the North had engaged in a great deception: Curbing its long-range missile program while expanding its ability to pummel nearby rivals with conventional and nuclear warheads.

Kim test fired three new missiles in 2019 and one this year. Those models, analysts say, have greater accuracy and new maneuvering powers that could help the warheads outwit American defenses in the region.

The differences between the United States and North Korea on how to achieve a nuclear-free Korean Peninsula have grown all but unbridgeable over the years. But a strong voice arguing that the gap can be narrowed through continued dialogue has been Moon, who assumed the role of mediator and cheerleader during the Trump administration.

Even after the summit meetings between Kim and Trump ended without an agreement, Moon’s government insisted engagement was the only viable way to end the nuclear threat and establish peace.

In an interview in April with The New York Times, Moon urged the Biden administration to start negotiations with North Korea, and build on the broad goals outlined by Kim and Trump.

This month, after Washington released its North Korea policy review, Moon said he saw no difference between the two allies’ approach to North Korea. Both countries intended to build on the Singapore agreement and take “diplomatic, gradual, phased, practical and flexible” steps toward the ultimate goal of denuclearizing the Korean Peninsula.

When he sits down this week with Biden, Moon said, one goal would be bringing North Korea “back on the path of dialogue.”

But those mutual interests have limits. For its part, the Biden administration has aimed to deepen Washington’s strategic partnership with South Korea and draw it into the evolving U.S. strategy to compete with China. It is a delicate dance because of South Korea’s enormous trade relationship with Beijing.

A United Nations panel of experts released a report this year claiming North Korean hackers stole $316.4 million from 2019 to November 2020 through cyberattacks, including $281 million from a cryptocurrency exchange in September 2020. The stolen cryptocurrencies were laundered through over-the-counter brokers in China, the report said.

The fruits of the theft, many experts believe, are funding the North’s most important project: expanding the nuclear arsenal.