A Large Young Population is a Double Edged Sword

Investors waiting for India to become China 2.0 may be disappointed with its path but not its returns

India and China. Western investors love to compare the world’s most populous nations as if they were identical economies at different points on the same timeline. After all, both are growth powerhouses. Over the decade ended in 2010, China’s GDP grew on average 10.3 percent per year versus an impressive 7.4 percent for India.

But investors should stop thinking about India as China 2.0. There are good reasons to be bullish on India, precisely because it is different from China.

While China is all about exports, India is an economy that thrives on domestic consumption. With fears of European contagion and anaemic worldwide growth affecting exporters like China and Brazil, fund managers have been looking more seriously at India. There are now two dozen Indian equity mutual funds and ETFs available to Western investors to capitalise on the country’s long-term growth.

The threat of an economic slowdown in India may give investors pause, but on a company level fund managers continue to see long-term opportunity. 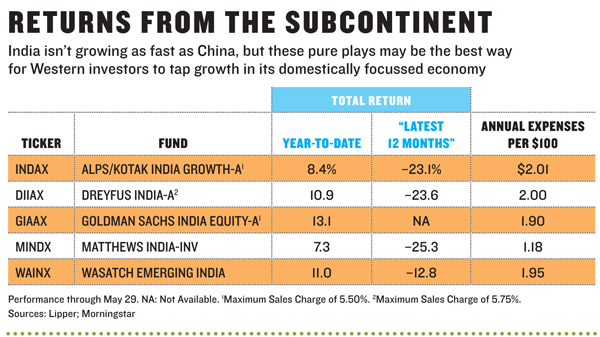 “The biggest collection of consumer-facing companies that can benefit from structural growth is found in India,” says Sammy Simnegar, manager of Fidelity’s International Capital Appreciation Fund. “The government doesn’t have major shareholdings in the vast majority of listed companies. In China it’s the exact opposite.”

The big story in India continues to be its demographics. It will overtake China as the largest population in the world by 2030 and has one of the youngest populations among emerging-market nations. Nearly half its citizens are under 25.

“Most developed markets are in decline, especially Japan. China and others are past their peak,” says Prashant Khemka, managing director and chief investment officer at Goldman Sachs Asset Management India.

Given its burgeoning population of working-age people, India’s biggest opportunity is also its biggest threat. Will its economy be able to provide enough jobs?

Sharat Shroff, manager of the Matthews India Fund, which has returned 10.2 percent annually since its inception in 2005, points to infrastructure investment as a critical step toward leveraging what he calls India’s “demographic dividend”.

Economists and analysts say the key will be maintaining GDP growth above 7 percent or so. The movement of rural Indians to urban life could play a big role in achieving that rate.

“Around 30 percent of the population in India is urban,” notes Khemka. “The movement of labour from agriculture to manufacturing and services can add 1 percent in growth annually.”

Unlike China, India is a net importer. Its domestic economy’s health will drive returns.

Simnegar of Fidelity also likes consumer companies with strong brands. “You’re going to have more people with more money in their pockets, who like to buy aspirational products.”

As with any emerging market, investors in India must be able to stomach risk. For example, India is the fifth-largest oil importer in the world. If a spike in oil price causes GDP growth to falter, India’s demographic dividend could very well become a population time bomb.