The Capitol Subway System, a network of trolleys in the fluorescent-lit bowels of the labyrinthine, 600-room US Congress in Washington, has been ferrying politicians back and forth for more than a century 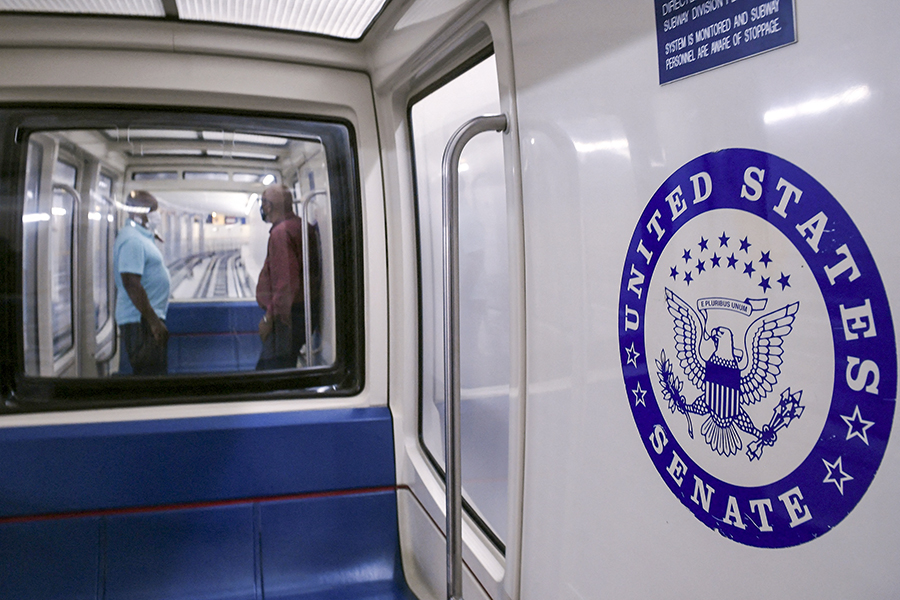 Capitol Hill staffers are seen on a subway car at the US Capitol
Image: Olivier Douliery / AFP

Frequented by presidents, Supreme Court justices and even the occasional movie star, it is the transport of choice for some of the world's most powerful movers and shakers—yet few Americans know it exists.

The Capitol Subway System, a network of trolleys in the fluorescent-lit bowels of the labyrinthine, 600-room US Congress in Washington, has been ferrying politicians back and forth for more than a century.

It has made headlines as the scene of a botched assassination bid, an impromptu off-Broadway stage and a hiding place for a president who disappeared from the Oval Office without telling anyone.

"Children love it so there are always senators who are willing to bring family members with young children, nieces and nephews, to ride on it," Dan Holt, an assistant historian at the Senate Historical Office, told AFP.

"And so I think there's just something kind of special about it."

The track stretches 3,100 feet—a shade under a kilometer—with the 90-second hop between stations just enough for serious political debate, idle gossip, an impromptu press conference or a moment of quiet reverie.

"Think about getting on the train to ride to work in other contexts, where you have that moment where you can just sit for a minute and think -- or sit and have casual conversation," Holt said.

"The train in the Capitol has served that purpose as well over time."

It has also provided useful photo opportunities for presidential hopefuls looking to show the common touch, such as Ronald Reagan, although a boyish JFK—then just plain old Senator Jack Kennedy—was once refused entry and scolded to "stand aside for the senators, son."

-Today, the bustling main station is abuzz whenever the Senate is in session, with journalists waiting patiently to swarm legislators as they disembark to vote in the upper chamber.

But the cut-and-thrust of political discourse isn't always as convivial below ground as it is on the Senate floor.

In 1950, Maine senator Margaret Chase Smith was preparing to deliver a rebuke to fellow Republican Joe McCarthy when the intimidating anti-communist crusader and smear-artist saw her in a subway car.

"Margaret, you look very serious," Smith later recalled McCarthy saying, according to Holt. "Are you going to make a speech?"

"Yes," she responded, "and you're not going to like it very much."

The Ohio senator dived for cover into the waiting subway car, yelling at the driver to whisk him away, as a second bullet whistled over his head.

"Only good fortune and the bad marksmanship of his assailant saved the senator," The New York Times reported after the gunman fled the scene, only to be arrested later.

In less querulous times, political leaders have seen the subway as something of a refuge from the frenetic pace of Washington politics.

William Howard Taft, the 27th president, alarmed aides one Saturday in January 1911 when he went missing for around an hour to go see the trains.

"A keen thrill of fear swept over the city when anxious inquiries at the White House brought forth the reply that the president could not be found. The alarm spread like a forest fire," the Washington Times reported at the time.

The first subway was opened on March 7 1909 for senators hoping to avoid the punishing Washington heat as they went between their offices and the upper chamber.

Electric Studebaker automobiles were replaced by a monorail with its own track three years later and, in 1960, officials added four $75,000 electric subway cars—dubbed "swift chariots of democracy" by the Senate chaplain.

A House line connected the Rayburn House Office Building to the Capitol five years after that and, in 1993, an $18 million Disneyland-style driverless train was introduced to great fanfare.

Not everyone supported these improvements. Some senators grumbled about bumpy rides while others complained that their delicately coiffured hair was being ruined by gusts of wind. Ohio's Mike DeWine banned his staff from riding in protest against government waste.

Lin-Manuel Miranda, the Tony Award-winning creator of hit musical "Hamilton," decided to take a midnight ride and belt out show tunes for his Twitter following when he was in the building to receive an award in 2017.

But the clientele will never truly disappear as long as the urgent task of running the country requires busy people to be in 10 places at once.

Tweets by @forbesindia
Which country has the best Netflix catalog?
It's time for cyber-insurance to become personal in the WFH age