After winning fans around the world, South Korean pop culture has entered North Korea, where its growing influence has prompted the leader of the totalitarian state to declare a new culture war to stop it 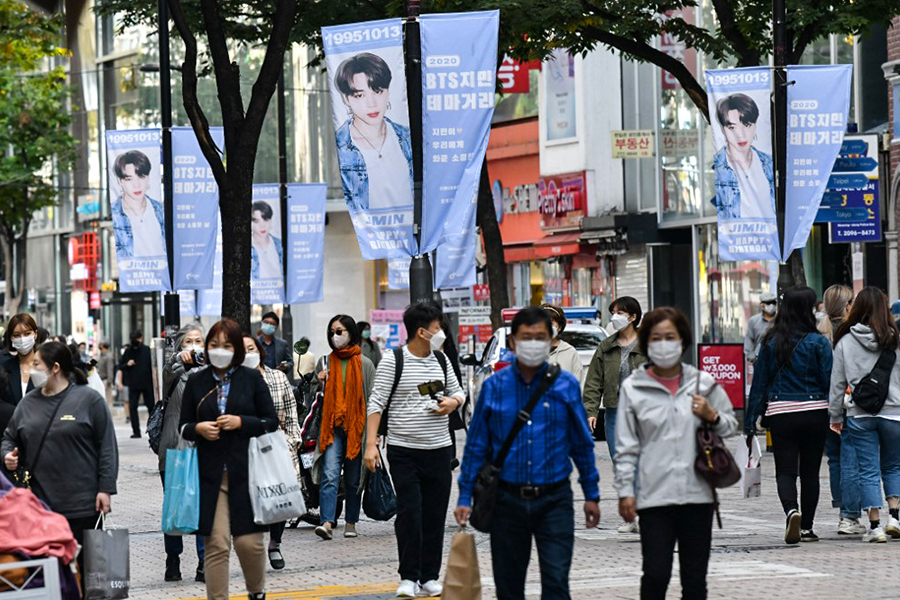 People walk past banners showing Jimin, a member of K-pop group BTS, at a shopping district in Seoul
Image: Jung Yeon-je / AFP
SEOUL — Kim Jong Un called it a “vicious cancer” corrupting young North Koreans’ “attire, hairstyles, speeches, behaviors.” His state media has warned that if left unchecked, it would make North Korea “crumble like a damp wall.”
After winning fans around the world, South Korean pop culture has entered the final frontier: North Korea, where its growing influence has prompted the leader of the totalitarian state to declare a new culture war to stop it. But even a dictator may have trouble holding back the tide.
In recent months, hardly a day has gone by without Kim or state media railing against “anti-socialist and nonsocialist” influences spreading in his country, especially South Korean movies, K-dramas and K-pop videos. As part of a panicked attempt to reassert control, Kim has ordered his government to stamp out the cultural invasion.
The censorship is anything but a peevish dictator’s tantrum. It comes at a time when the North’s economy is floundering and its diplomacy with the West has stalled, perhaps leaving the country’s youth more receptive to outside influence and challenging Kim’s firm grip on North Korean society.
“Young North Koreans think they owe nothing to Kim Jong Un,” said Jung Gwang-il, a defector from the North who runs a network that smuggles K-pop into North Korea. “He must reassert his ideological control on the young if he doesn’t want to lose the foundation for the future of his family’s dynastic rule.”
Kim’s family has ruled the North for three generations, and loyalty from millennials in the country has often been tested. They came of age during a famine in the late 1990s, when the government was unable to provide rations, causing millions to die. Families survived by buying food from unofficial markets stocked with goods smuggled from China, including bootlegged entertainment from the South.
North Korean state propaganda had long described South Korea as a living hell crawling with beggars. Through the K-dramas, first smuggled on tapes and CDs, young North Koreans learned that while they struggled to find enough food to eat during a famine, people in the South were going on diets to lose weight.
South Korean entertainment is now smuggled on flash drives from China, stealing the hearts of young North Koreans who watch behind closed doors and draped windows.
Its presence has become so concerning that North Korea enacted a new law in December. It calls for five to 15 years in labor camps for people who watch or possess South Korean entertainment, according to lawmakers in Seoul who were briefed by government intelligence officials, and internal North Korean documents smuggled out by Daily NK, a Seoul-based website. The previous maximum punishment for such crimes was five years of hard labor.
Those who put material in the hands of North Koreans can face even stiffer punishments, including the death penalty. The new law also calls for up to two years of hard labor for those who “speak, write or sing in South Korean style.”
The introduction of the law was followed by months of new dictates from Kim warning of outside influence. In February, he ordered all provinces, cities and counties to “mercilessly” stamp out growing capitalist tendencies. In April, he warned that “a serious change” was taking place in the “ideological and mental state” of young North Koreans. And last month, the state-run newspaper Rodong Sinmun cautioned that North Korea would “crumble” if such influences proliferated.
“To Kim Jong Un, the cultural invasion from South Korea has gone beyond a tolerable level,” said Jiro Ishimaru, chief editor of Asia Press International, a website in Japan that monitors North Korea. “If this is left unchecked, he fears that his people might start considering the South an alternative Korea to replace the North.”
Computers, text messages, music players and notebooks are now being searched for South Korean content and accents, according to North Korean government documents smuggled out by Asia Press. Women in North Korea, for example, are supposed to call their dates “comrade.” Instead, many have started calling them “oppa,” or honey, as women do in K-dramas. Kim has called the language “perverted.”
The families of those who are caught “imitating the puppet accent” from the South in their daily conversations or text messages could be expelled from cities as a warning, the documents said.
This is not the first time North Korea has lashed out against an “ideological and cultural invasion.” All radios and televisions are preset to receive government broadcasts only. The government has blocked its people from using the global internet. Disciplinary squads patrol the streets, stopping men with long hair and women with skirts that are considered too short or trousers deemed too tight. The only hair dye available is black, according to the Russian Embassy in Pyongyang.
But it may be too late to patch the cracks left behind during the 1990s. Jung, 58, remembers watching “Jealousy,” a K-drama about young love, when he was still in North Korea and feeling a culture shock. “On North Korean TV, it was all about the party and the leader,” he said. “You never saw such a natural display of human emotions like a man and woman kissing.”
In a survey that Seoul National University’s Institute for Peace and Unification Studies conducted of 116 people who fled North Korea in 2018 or 2019, nearly half said they had “frequently” watched South Korean entertainment while in the North. A current favorite, Jung said, was “Crash Landing on You,” a show about a paragliding South Korean heiress who is carried across the border by a sudden gust of wind and falls in love with a North Korean army officer.