For the first time, the United States is trying to nudge China's leadership into a conversation about its nuclear capability, focusing the talks first on avoiding accidental conflict, then on each nation's nuclear strategy 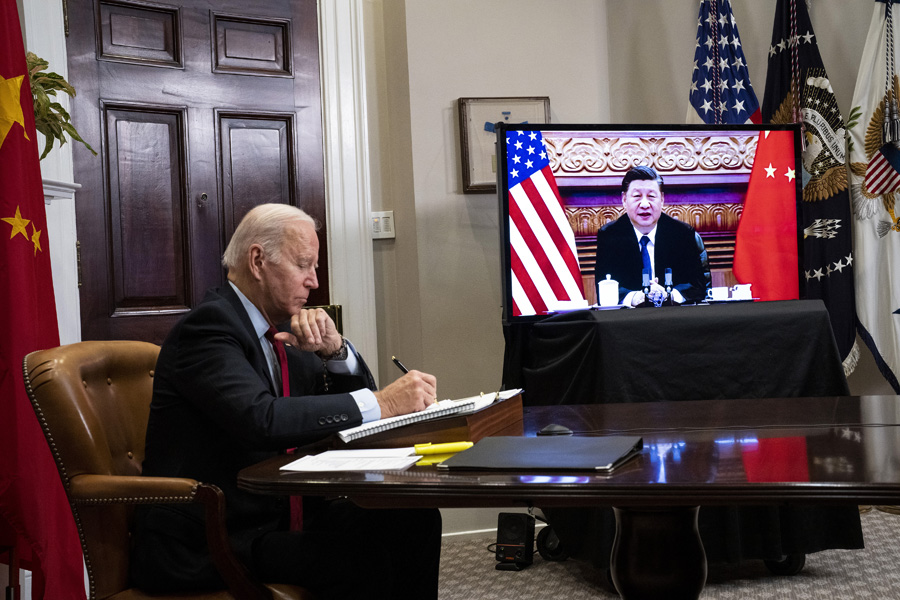 
The United States has no nuclear hotline to Beijing. The two countries have never had an in-depth conversation about American missile defenses in the Pacific, or China’s experiments to blind U.S. satellites in time of conflict.

And Chinese officials have consistently rejected the idea of entering arms control talks, shutting down such suggestions by noting — accurately — that the United States and Russia each have deployed five times more nuclear warheads than Beijing possesses.

President Joe Biden is seeking to change all that.

For the first time, the United States is trying to nudge China’s leadership into a conversation about its nuclear capability. U.S. officials, describing the American strategy, say Biden and his top aides plan to move slowly — focusing the talks first on avoiding accidental conflict, then on each nation’s nuclear strategy and the related instability that could come from attacks in cyberspace and outer space.

Finally — maybe years from now — the two nations could begin discussing arms control, perhaps a treaty or something politically less complex, such as an agreement on common norms of behavior.

In Washington, the issue has taken on more urgency than officials are acknowledging publicly, according to officials who are involved. Biden’s aides are driven by concern that a new arms race is heating up over hypersonic weapons, space arms and cyberweapons, all of which could unleash a costly and destabilizing spiral of move and countermove. The fear is that an attack that blinded space satellites or command-and-control systems could quickly escalate, in ways that were not imaginable in the nuclear competitions of the Cold War. China’s capabilities could also pose a threat to Biden’s hopes of reducing the role of nuclear weapons in American defenses.

In some ways, Washington is focused on the progress of China’s nuclear capability in a way that it has not been since Mao Zedong first tested a weapon in 1964.

In Biden's virtual summit meeting this month with Chinese President Xi Jinping, who clearly has sought to present himself as a epoch-defining leader alongside Mao, the U.S. president raised what the White House has euphemistically called “strategic stability talks.”

In interviews, Biden’s aides have said the effort is a tentative first step toward a far larger agenda, akin to the initial conversations about nuclear weapons that Russia and the United States held in the 1950s. The starting goal, they insist, is to simply avoid miscommunication and accidental war — even if it never rises to the level of a nuclear threat.

“You will see at multiple levels an intensification of the engagement to ensure that there are guardrails around this competition,” Jake Sullivan, Biden’s national security adviser, said in a presentation at the Brookings Institution the day after the virtual summit.

The nuclear relationship with Russia, he noted, is “far more mature, has a much deeper history to it.” After the summit meeting between Biden and Xi, Sullivan added, it is time to begin such conversations with China. “It is now incumbent on us to think about the most productive way to carry it forward,” he said.

In a sense, this is the revival of an old fear in Washington: In 1964, Lyndon Johnson was so worried about the rise of another nuclear rival that he considered, but ultimately rejected, plans to conduct a preemptive strike or covert sabotage on China’s main nuclear testing site at Lop Nor.

But China’s decision to maintain a “minimum deterrent” for the past six decades — a nuclear force large enough to ensure that it could respond to a nuclear attack, but not nearly the size of America’s or Russia’s — largely knocked its nuclear program off the Pentagon’s list of top threats. Now, its recent moves, from building new missile silo fields to testing new types of advanced weapons, come just as Biden’s aides are deep into an examination of American nuclear strategy that will be published in coming months.

When the Chinese launched a hypersonic missile in July, circling the globe once and then deploying a maneuverable glide vehicle that could zig and zag on an unpredictable path and deliver a weapon anywhere on earth, Gen. Mark Milley, the chair of the Joint Chiefs of Staff, declared that the U.S. was “very close” to a “Sputnik moment.” But in the weeks since, U.S. officials have been reluctant to say what, exactly, about that experiment so rattled them — beyond the fact that it revealed a technological sophistication that they did not know the Chinese had achieved.

It’s unclear whether China plans to deploy a hypersonic weapon in the future, and, even if it does, whether they would be armed with nuclear warheads. But Milley’s deputy, Gen. John Hyten, who is retiring as the vice chair of the Joint Chiefs, told reporters in October that the Chinese military had conducted “hundreds” of hypersonic tests, compared with nine by the United States.

Hyten said the test and Beijing’s other moves, such as digging hundreds of new silos for long-range missiles, suggest the Chinese government may now be interested in developing a nuclear first-strike capability, not just the minimum deterrent.

On Capitol Hill, the conversation so far is largely about matching the Chinese investment, rather than rethinking the nature of the arms race.

“I’m very concerned,” Rose Gottemoeller, an arms control official in several administrations who now teaches at Stanford University, said in an interview. “What’s worrying me is the automaticity of the actions — of more nuclear weapons and more missile defenses without thinking if there’s a smarter way.”

Even before the test, U.S. officials and military contractors were trying to figure out new defenses against the hypersonic warheads. That would be more complex than intercepting an intercontinental ballistic missile, a project that has already cost more than $300 billion over several decades and yielded only episodic success. This month, Raytheon, Northrop and Lockheed won Pentagon awards to compete with one another in building an interceptor seen as agile enough to knock out a hypersonic glider. The defensive weapon is billed as the first of its kind.

The Pentagon also has embarked on a vast effort to loft up to 500 satellites that would provide improved means of tracking ballistic, cruise and hypersonic missiles. The swarm is considered crucial for establishing an end-to-end system that would identify hypersonic attacks and direct interceptors onto flight paths that would let them destroy the incoming gliders.

It all worries Gottemoeller, who recently published a memoir of negotiating the New START treaty with Russia. “This action-reaction cycle is in nobody’s interest,” she said. “We have to talk about how we’re going to interrupt it.”

Tweets by @forbesindia
Will the vaccines stop Omicron? Scientists are racing to find out
Four journalists have been killed in India in 2021, second to Mexico's seven