The party gave no hint of any possible successor to Xi, adding to the signs that he is likely to secure a third five-year term as the party's general secretary next year, possibly without a clear heir apparent 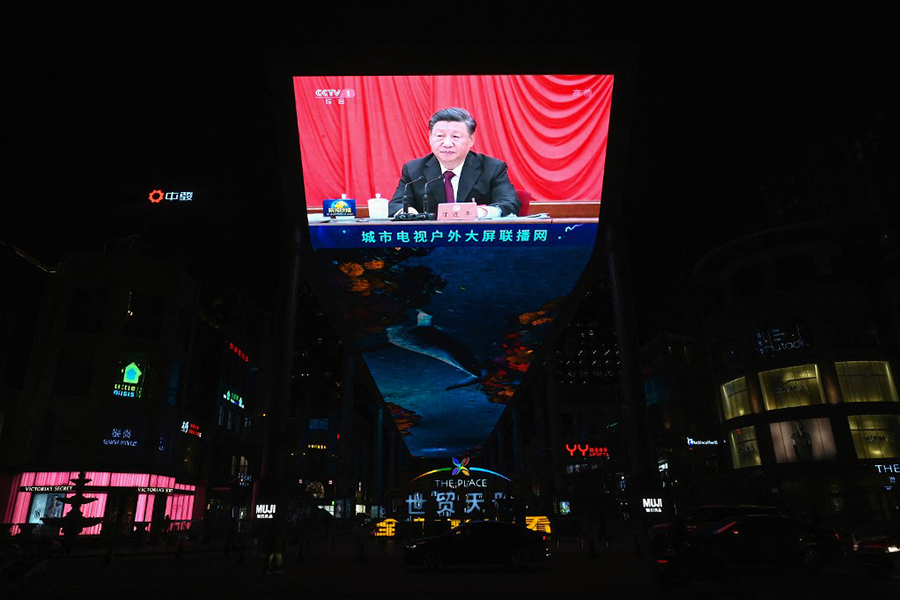 China's President Xi Jinping is seen in a big screen during an evening news program at a mall in Beijing on November 11, 2021, as top Communist Party leaders wrapped up a key meeting by passing an important resolution on the country's past, state media said, which is expected to cement President Xi Jinping's grip on power. (Photo by Noel Celis / AFP)

China’s Communist Party officially decided Thursday to exalt President Xi Jinping as one of the country’s greatest modern leaders, vaulting him into a rarefied realm that strengthens his potential to retain control for many years.

The decision, announced after a closed-door meeting by senior party officials in Beijing, amounted to a revision of the ruling party’s 100-year history that some analysts said would help cement Xi’s authoritarian model for ruling China. It anointed Xi, 68, with an era-defining stature that will take his official adulation to a new and more intense phase.

In the party’s eyes, Xi, already China’s most powerful leader in decades, now stands alongside Mao Zedong, founder of the country’s communist rule, and Deng Xiaoping, chief architect of its economic takeoff.

The announcement, conveyed in China’s state-run media via an official communiqué about the meeting, gave no hint of any possible successor to Xi, adding to the signs that he is likely to secure a third five-year term as the party’s general secretary next year, possibly without a clear heir apparent.

The decision to place Xi among the country’s historical giants will bolster his argument that he is the only leader capable of steering China toward superpower status through uncertain times. China navigated the COVID-19 pandemic relatively well, but it faces economic risks from debt-laden companies and local governments, social pressures as its population ages, and growing distrust from the United States and other Western countries.

Under Xi’s leadership, China has “made historic achievements and undergone a historic transformation,” said the official communiqué from the meeting, hailing what the party described as economic and foreign policy accomplishments, along with successes in fighting pollution and containing the coronavirus.

Under Mao, Deng and now Xi, the communiqué said, China has “achieved the tremendous transformation from standing up and growing prosperous to becoming strong.”

The announcement will play a big part in changes among the top echelons at a Communist Party Congress, likely to be held in 2022. The centrality of the party’s rule and Xi’s paramount role in it were the dominant themes of the official coverage.

Wu Qiang, an independent political analyst in Beijing, said the proceedings signaled “a highly ideological governance” in the future, emphasizing a cult of personal worship around the leader.

It was, Wu said, “an important turning point in the birth of a new totalitarian system in the world in the 21st century.”

By claiming a third term as party leader, as he is expected to do, Xi would break the pattern of staying in power for only two terms. In 2018, Xi made a bold power play by eliminating a term limit on the presidency, opening the way for him to lead China indefinitely. That move overturned widespread expectations that the party had settled into a 10-year cap on leaders’ time in power.

What was decided at the meeting?

The gathering was officially focused on summarizing the lessons of Communist Party history. But the outcome showed that participants concentrated on the future, in particular on extending Xi’s sway.

Their communiqué lavished praise on Xi’s policies since he took power in 2012, glorifying his efforts to retool the economy, reduce pollution and poverty and eradicate corruption. Under Xi, it stated, the Chinese leadership had shown “enormous political courage.”

One sore spot for China’s leaders has been the criticism, especially from abroad, that its territorial claims and strident nationalist rhetoric have alienated other countries, especially the United States and its allies. But the party meeting gave no sign that Xi had softened.

“China has broken new ground in its diplomatic endeavors amid profound global changes and turned crises into opportunities,” the communiqué said. “These efforts have resulted in a marked increase in China’s international influence, appeal and power to shape.”

The party leaders also praised Xi’s policies in culture and political ideology. Since 2012, Xi has cracked down on liberal values and celebrity culture, while promoting a return to patriotic rectitude.

How did China convey this news?

The meeting itself was veiled in the secrecy typical of Communist Party deliberations, but once it ended, the officially orchestrated adulation began.

The state television network, CCTV, doubled its nightly newscast to a full hour. It showed the 348 members and alternate members of the party’s Central Committee voting, apparently in unison, to adopt the resolution enabling Xi to extend his rule.

The CCTV news anchor read the final statement word for word, followed by the playing of “The Internationale,” the musical standard of the socialist movement since the 19th century. Scores of comments posted online repeated the same phrase: “To seek happiness for the Chinese people, to seek rejuvenation of the Chinese nation.” Others, perhaps less exultant, seemed to have been blocked.

How will this affect Xi’s tenure?

An important signal was what did not happen: No likely successor to Xi emerged, even though it was a natural occasion to unveil up-and-coming leaders ahead of the Communist Party Congress next year.

Tweets by @forbesindia
Photo Of The Day: Wading through trouble
Rolex is one of the world's most-searched brands... for fakes