For long, India held a high moral ground in a region in strife. Is it eroding now?

The shift could open opportunities for China, which has used the promise of investment and access to its hard-charging economy to cultivate stronger relations with its rival's neighbours 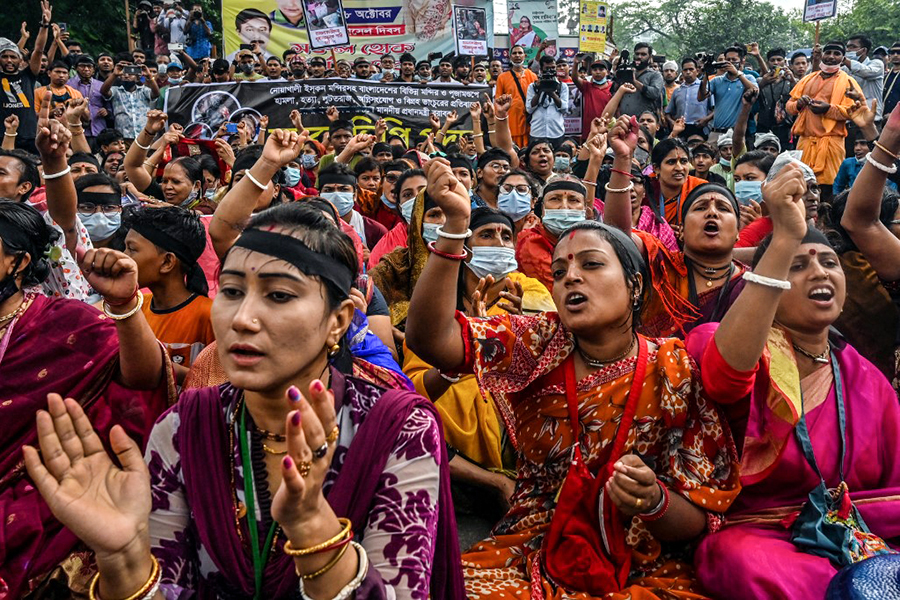 Bangladeshi Hindus stage a demonstration in Dhaka to protest against the fresh religious violence against Hindus in the country.
Image: Munir Uz Zaman/ AFP

The victims were minority Hindus living in Bangladesh, a majority-Muslim nation grappling with increasing extremism, and the violence drew an outcry from politicians in neighboring India. As the region’s traditional center of gravity, India has a history of promoting tolerance. Prime Minister Narendra Modi has also positioned himself as a champion of Hindus against a history of victimhood.

But the erosion of human rights in India has weakened its moral high ground in a region where ethnic and sectarian tensions are worsening. Sheikh Hasina — Bangladesh’s prime minister and a close ally, who had just sent Modi 71 red roses on his birthday — had pointed words for India, even as she promised to hunt the culprits.

“We expect that nothing happens there,” Hasina said, “which could influence any situation in Bangladesh affecting our Hindu community here.”

India is losing leverage in South Asia as its government tries to reshape the country into a Hindu state. In marginalizing and maligning its minority Muslims at home, Modi’s government has weakened India’s traditional leadership role of encouraging harmony in a region of many fault lines.

The shift could open opportunities for China, which has used the promise of investment and access to its hard-charging economy to cultivate stronger relations with its rival’s neighbors.

“The openly partisan approach to communal issues has created a very peculiar situation for us as far as that moral high ground in neighborhood policy is concerned,” said Yashwant Sinha, who was India’s foreign minister when Modi’s Bharatiya Janata Party was last in power in the early 2000s. “We can’t say, ‘You stop it; this should not happen,’ because we ourselves are guilty of it.”

Leaders of the ruling party declined to comment. In public statements, officials have pointed to Modi’s “neighborhood first” focus in foreign policy, something he announced soon after taking office in 2014. They say the Indian leader is deeply invested in improving regional connections “that bear prosperity to the neighborhood.”

Calls for tolerance in the region are increasingly needed.

In Sri Lanka, a Buddhist-majority country, the government has been taking a tougher stance toward the Tamil, a largely Hindu minority whose grievances led to a three-decade civil war, and toward its small Muslim population. President Gotabaya Rajapaksa recently appointed a hard-line Buddhist monk to lead an overhaul of the legal system, although he has been accused of stirring hatred against Muslims and jailed for intimidating the wife of a journalist who had disappeared. The panel overseeing the overhaul effort includes Muslim scholars but has no Tamil representation.

In majority-Muslim Pakistan, where the ethnic Pashtuns and Baloch have long been marginalized, increasing Islamic extremism has resulted in vigilante action against the Hindu minority, who make up just 2% of the population. They have faced repeated episodes of violence, vandalism of their temples, occupation of their land and an increase in forced conversion of minority girls, according to Pakistan’s human rights commission. Prime Minister Imran Khan has spoken out against the abuses, but to little effect.

Communal violence in one country often becomes fodder for the narrow nationalism of the other. Khan has blamed Modi for “unleashing a reign of fear and violence against India’s 200 million-strong Muslim community.” Modi’s supporters frequently splash videos of the anti-Hindu violence in Pakistan and elsewhere in the region as justification for policies seen as discriminating against Muslims.

But such violence and the abuse of minorities is nothing new in South Asia, a region of deep ethnic and religious fault lines that is home to one-quarter of the world’s population.

The traumatic partition of India and Pakistan in 1947 and the war-driven split of Bangladesh from Pakistan in 1971 left sizable ethnic and religious minorities in each country. The domestic policies of one nation inevitably affect the population of another.

Traditionally, how India — the largest and the most diverse of the nations — tried to manage its affairs set the tone for the rest. Even when sectarian violence flared within its own borders, India was the big brother with larger-than-life leaders like Gandhi and its legacy of ending centuries of colonial rule through nonviolence.

The policies of Modi’s party have chipped away at that position, not unlike the erosion of the U.S.’ global standing on human rights during the Trump administration. His Bharatiya Janata Party has pursued a Hindu-first agenda that has often put the country’s Muslims at a disadvantage. The party has also refused to rein in hard-line elements within its ranks, sometimes leading to violence.

Hasina and others have suggested that the hardening attitudes toward Muslims in India have contributed to violence against Hindus in Bangladesh.

The violence last month in Bangladesh was set off by rumors that a Quran, the Muslim holy book, had been disrespected in a Hindu temple. Seven people have been killed, police said.

That violence has further deepened sectarian tension in India. In recent weeks, a right-wing Hindu group has been organizing large protests in the Indian state of Tripura, just over the border from Bangladesh, against the anti-Hindu violence there. Police have had to deploy heavy security to protect mosques, after members of the group vandalized at least one mosque and burned shops. A group of lawyers and activists who went to Tripura to document the damage found themselves charged with violating a draconian anti-terror law.

Tweets by @forbesindia
Welcome to Motel California: Bert Muller, Burrito, and India
Americans are flush with cash and jobs. They also think the economy is awful