Bert Mueller has been living his American dream by selling Mexican cuisine in India for close to a decade. Post-pandemic, California Burrito is set to clock its best numbers. Find out how Mueller built his Taco stand in India 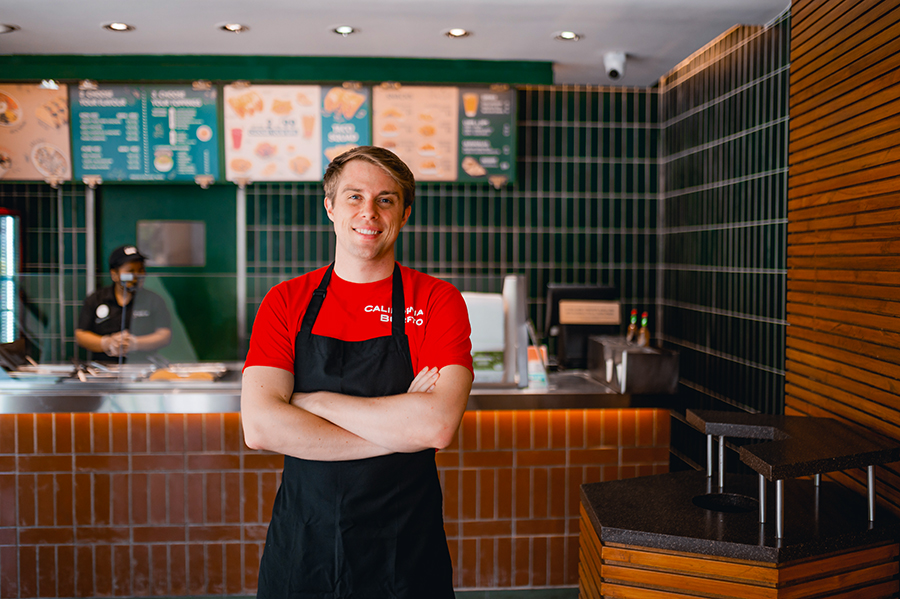 Over a decade ago, a young American came to India. Bert Mueller, a student of music and public policy, landed in Jaipur, the pink city, in 2010. “It is a wonderful place. I loved studying there,” he recalls. The ‘wonderful’ place turned out to be enchanting. Mueller applied for a study programme in Jaipur to know more about Indian culture, and lived with an Indian family for over six months. A fellow student—on the same study programme—cooked fantastic Mexican food, which was loved by the Indian family. That sparked the thought, and whetted Mueller’s appetite, of staying back. “Why not start a business?” he wondered.
The idea was simple. Mueller loved Mexican cuisine, and also had rudimentary exposure in the restaurant business when he worked at one of the local Mexican brands during his college days in the US. Back in India, he saw how Indians had a taste for Mexican food. “So I put two and two together,” he recounts. “I decided to pursue my dream of opening a business of Mexican cuisine in India,” he says.

Meanwhile, back in the US, people found the idea outlandish. “Have you gone mad?” was the common question greeting the young to-be-entrepreneur. Only a crazy person would think of making a living by selling Mexican food in India. “Wake up. It’s not Alice in Wonderland,” was a curt reminder from a friend who tried to jolt Mueller out of his fancy world.

The young American, though, was convinced. He knew he had spotted his Wonderland. Along with his two friends and a chef from San Francisco, he came to India and opened the first outlet of California Burrito in Bengaluru in October 2012. The choice of place by the then-22-year-old was interesting. Though Gurugram and Bengaluru made it to the shortlist on the back of their cosmopolitan credentials, the former was dumped due to its pricey real estate.

California Burrito made a silent beginning in Bengaluru. “I recall people eating burrito with a fork. That was something unique,” says Mueller, who was also involved in doing something bizarrely unique: Making Mexican cuisine popular. By 2012, India was in the midst of an American QSR boom—Domino’s, McDonald’s and KFC—and for a country which had developed a taste for pizzas and burgers, burritos looked like an alien food. Given the fact that Mueller was not too keen to arm himself with tacos, California Burrito made a steady start.

Over the next six years, Mueller stayed put at Bengaluru. The store count inched from eight in FY15 to 26 in FY18. While revenue during the same period jumped from Rs6.98 crore to Rs21.03 crore, the bottom line turned from red to black—loss of Rs14 lakh to profit of Rs96 lakh. The juggernaut continued. By March 2020, California Burrito spread to Delhi-NCR and Hyderabad, and took its store count to 37.

Then came the pandemic, and the American dream got almost snuffed. Over the next year, stores got halved as 19 outlets in business parks shuttered; revenue tumbled from Rs41.38 crore in FY20 to Rs18.4 crore in FY21, and the brand posted its biggest loss of Rs3.6 crore. “It was a tough time,” Mueller recalls.

Fast forward to November 2021. California Burrito is clocking its best numbers in a decade, the business is back on track with a bang, and Mueller continues to live his dream. “I see my journey as a new American dream,” he says. The dream, he outlines, is being able to move anywhere across the world and bring and build something that one loves in that place. If we look at the last 100 years, Mueller lets on, many people would move to America for better opportunities. In this age of globalisation and the opening up of global economies, now people can move anywhere or even just open their business online! “There is a lot of love in India,” he says. “For me, India is an incredible country.”

What backers, though, found incredible was the way Mueller and his gang ran the ship. “What shocked me was the frugality of the business operations,” says Ajay Kaul, a food and beverage (F&B) industry veteran, who came on board as mentor and ended up investing in the company in December 2019. “I used to call him an American marwaari,” he smiles, alluding to the life led by the founder. Mueller used to travel by a non-AC bus to Chennai, and had a 10-year-old Maruti Omni, which again was oppressive due to the absence of an air conditioning. The list was long, recalls the former chief executive officer of Jubilant FoodWorks, and the tight-fisted way of operations reflected in the P&L (profit and loss).

Apart from business, what Kaul found amazing was the daring dream of the American man. He left his home country, came to India to live his dream, and had odds heavily stacked against him. “He has done a Madhatter,” says Kaul, alluding to the fictional character from The Alice in Wonderland.  Bert, he lets on, is a great example of ‘where there is a will, there is a way’. Muller’s adaptability, resilience, and ability to get along with a culturally-diverse team while staying true to his vision is commendable, he adds.

Back in March 2020, and over the next few months, Mueller did display loads of nimbleness. Covid threatened to play spoilsport. California Burrito was logging over 20 percent same store sale (SSS) growth for eight quarters pre-Covid. “We were beating all other listed brands in this metric,” says Mueller. Post-Covid, the food entrepreneur had to beat his own playbook. “We reworked packaging, had a hard look at the menu, focussed on delivery and tweaked our pricing,” he says.

What, though, rescued Bert from a tacky situation was tacos! “We were weak in this category,” he says. California Burrito rolled out Taco Squad campaign, and launched tacos starting at Rs55. “Tacos are democratic and accessible food, and this campaign was loved by all,” he says.

What also helped the brand in keeping its loyal flock of customers, and adding more to it, was the move to stay authentic in taste. Mueller explains. A decade ago, many ingredients used in Mexican cuisine were not available in India. In 2015, Mueller started importing black and pinto beans. Three years later, he decide to import and plant 500 Hass Avocado trees. Last year, he started cultivating Tomatillos. Now, the company grows vegetables with key partners who practice sustainable agriculture and provide authentic ingredients like tomatillos, chipotle chillies, black and pinto beans, and chilli de arbol. “These small details made a real difference in the taste and made people love Mexican cuisine,” he says.

For California Burrito, the future looks promising. Gurugram and Hyderabad, Mueller informs, are doing higher sales per store than Bengaluru. “We are excited about growing into Mumbai next year,” he says. The target is to reach 500 stores over the next few years.

So what next? For Mueller, the future lies in learning from the past. “We were slow to join aggregators, didn’t focus on marketing and didn’t invest in supply chain efficiently,” he confesses. “We are now fixing it,” he says. The wave of Mexican cuisine, he underlines, has finally arrived in India for sure, and is set to spread quickly. India is turning out to be a land of promised opportunities, and a cosy home to the American dream.

Tweets by @forbesindia
Bakers Circle......in every bite of fast food and cloud kitchens
For long, India held a high moral ground in a region in strife. Is it eroding now?