Havells: Punching above its weight, and winning 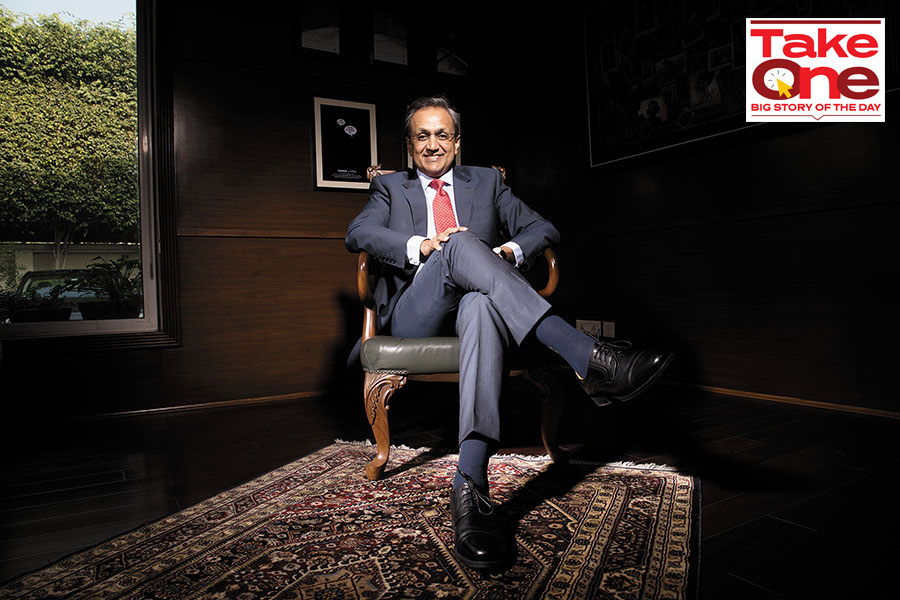 Circa 2005. The mood was upbeat in the Havells camp. The year’s turnover stood at around Rs 700 crore, with a net profit of Rs 30 crore. The interesting part, though, was the shocking pace of growth of the homegrown electrical and lighting products company in a decade: It had leapfrogged almost seven times. Havells, points out chairman & managing director Anil Rai Gupta in his book Havells: Untold story of Qimat Rai Gupta, had the potential to enter the big league and compete effectively with the likes of Philips and Siemens. “We were the young Turks of India Inc,” Gupta stressed. Success, he underlined, begets confidence.

Over the next two years, the company mustered enough success, and confidence, which fuelled its global ambition. Havells, founded by Anil’s father Qimat Rai Gupta, was ready to punch above its weight. And it did. In April 2007, Havells bought Sylvania, a Netherlands-based electrical major which was one-and-a-half times bigger than its new Indian owner in terms of revenue. “We were ecstatic,” Gupta recounts in his book. Sylvania was operating across 50 countries. Havells was now catapulted on the global stage by buying out a larger company. Cut to December 2015. Havells sold 80 percent stake in Sylvania. “We felt that this was not the right place to invest our efforts for the next ten years,” Gupta explains in an exclusive interview to Forbes India. After turning around Sylvania post the global meltdown in 2008, the company was turning out to be a drag on Havells. The global business landscape had also changed drastically. Europe, which accounted for 60 percent of Sylvania’s business, had turned sluggish. The traditional lighting market was making a transition to LED. “To change the dynamics in a slow growth economy meant pumping in loads of money and effort,” Gupta recalls. Havells was not prepared to do so. Not when the home run was starting to look promising. The Indian market was growing much faster than Europe and the US. Havells decided to put all its manpower and money into India. “Why even think of being a very big global player? We exited Sylvania,” says Gupta, adding that it was the only Indian company to exit a global business at a profit. Though making a profit and exiting might look like a consolation prize—emotionally too it was difficult to let go—for Havells, the business sense made the best sense. “We started scouting for growth opportunities in India,” he adds. Two years later, in 2017, Gupta bought the consumer business division of Lloyd Electric at an enterprise value of Rs 1,600 crore. The deal plugged the fast moving electrical goods (FMEG) company into a consumer durable world dominated by the likes of Samsung, LG, Daikin and Voltas. Critics, and investors, were not impressed. While Lloyd’s share dipped as much as 17.1 percent—the day after the deal was announced— Havells’s reportedly tumbled by 3.2 percent. Gupta, for his part, was convinced that the acquisition would drive the company’s growth. “We have always realised the strength of brands, acquiring them, and nurturing them,” he says. Havells, Gupta underlines, too was a brand acquired by his father in 1971, although the patriarch had plunged into the business of electricals back in the late 1950s after opening a shop in Delhi’s electricals wholesale market.

The value in Lloyd became evident in the second quarter of fiscal 2021, when it posted a 56 percent jump in sales of Rs 280 crore, over a year ago. Although it is the fourth-biggest in terms of contribution to the revenues of Havells—the biggest is cables—Lloyd posted the highest growth; the growth was led by ACs,  followed by washing machines and refrigerators, which wwere rolled out in September this year. Gupta is happy with the performance. “It’s satisfactory,” he says. Lloyd, the third biggest AC brand, he explains, makes Havells a complete consumer durable player. “We are a complete portfolio now with ACs, washing machines.” Overall, too, Havells has a lot going for it in highly-competive segments. In MCBs (miniature circuit breakers) and switches, it faces foreign giants such as Legrand, Schneider and Anchor (now owned by Panasonic); in lighting and small domestic appliances it’s pitted against Philips, Crompton and Wipro; in ACs, TVs, fridges and washing machines, it has formidable foreign competitors in LG, Samsung, Sony, Daikin, Carrier as well as domestic majors such as Voltas, the biggest AC player in India. What makes Havells unique is that it is the only brand with a deep and wide presence inside every nook and corner of a consumer’s home. From wires, switches, fans, coolers, LED lights, water heaters, water purifiers to small domestic appliances, personal grooming products, TVs, ACs, washing machines and refrigerators, Havells is ubiquitous with its battery of brands such as Lloyd, Standard, Crabtree and Reo. It’s the most penetrated household brand in the country. “From being a cables and wires player, it has diversified into a consumer electrical and durables maker,” points out a recent analyst report of Motilal Oswal. What’s the secret sauce? “We invested in manufacturing, in Make in India,” smiles Gupta. With 13 manufacturing plants across India, Havells makes 95 percent of its products in the country. This, Gupta underlines, changed the game for the company, which posted revenue of Rs 9,429 crore in FY20, and Rs 3,931 crore for the first half of FY21. Manufacturing has always been the most under-rated, and neglected, aspect of any business in India, Gupta explains. Most players in this sector prefer the easier route of importing from China. “But they don’t invest profits back into the system. They don’t invest in R&D, and they don’t invest in actually competing,” he asserts. For FY20, Havells invested Rs 102 crore in R&D. In FY16, it was just Rs 36 crore.

Gupta shunned the herd mentality on another front. He didn’t fall in the trap of looking for ‘synergies’ to bring down cost. When Havells started selling fans in 2003, the easy way out was to use the sales team of wires and cable to peddle fans. “We didn’t do that,” says Gupta. “Today we have 25 different businesses and 25 different sales teams.” Every business, he lets on, requires dedicated infrastructure, input and manufacturing operations. “We treated each business as a separate business.” The strategy seems to have paid off. Havells is in the top five in every product category it entered over the last two decades. “In most cases, we are the leaders. No other player can make this claim,” says Gupta. The foundation of the success story of Havells, reckon marketing experts, was laid on manufacturing in the country. “Though in the business of circuits, it never short-circuited the process to make quick bucks,” says Ashita Aggarwal, marketing professor at SP Jain Institute of Management and Research. The Guptas, she maintains, had the foresight, and have been long-term players. Falling back on China for contract manufacturing—what the first set of Indian handset players did for a considerably long time—was the easiest option. “It is the only AC maker to have almost its entire product manufactured in India,” she claims. What also helped, along with in-house manufacturing, was investing in brand building. It moved from generic electrical equipment to creating high-quality brands. Havells took the lead in creating, and building, a category. “Havells made itself aspirational,” says Harish Bijoor, who runs an eponymous brand consulting firm. It represented the gold standard of safety, and carved out for itself a segment of customers who would walk in and ask for the item by brand-name as opposed the item by item-name, he adds. Havells, Bijoor points out, has played its cards well, cobbling together an empire of electrical and consumer goods as India consumed more and more of these. To that extent, the company has found itself in the right place at the right moment with a right set of products in its kitty. “Whether by design or default, Havells finds itself in a sweet spot today,” says Bijoor. Getting there, though, was not easy. “Till 15 to 20 years back, we were considered a B-grade brand compared to Schneider and Siemens,” rues Gupta. It took loads of efforts and investment over years to transform the brand. Consumers, he asserts, now trust Havells for its quality. “My father always used to say ‘what next’ and he kept upping the ante,” says Gupta. So what next for Gupta? With his newest baby—refrigerators—added in the family, Havells is fighting a war on multiple fronts, interestingly against the same set of foreign rivals: LG and Samsung. Can he make Lloyd the biggest consumer durable player? Gupta sounds confident of making a strong dent. What gives him the confidence is the success he has tasted in electricals against the global majors. The rules of the game remain the same. At the front end of the consumer durable industry is the brand and distribution. And at the back-end is R&D and technology. “We have cracked both,” he says. 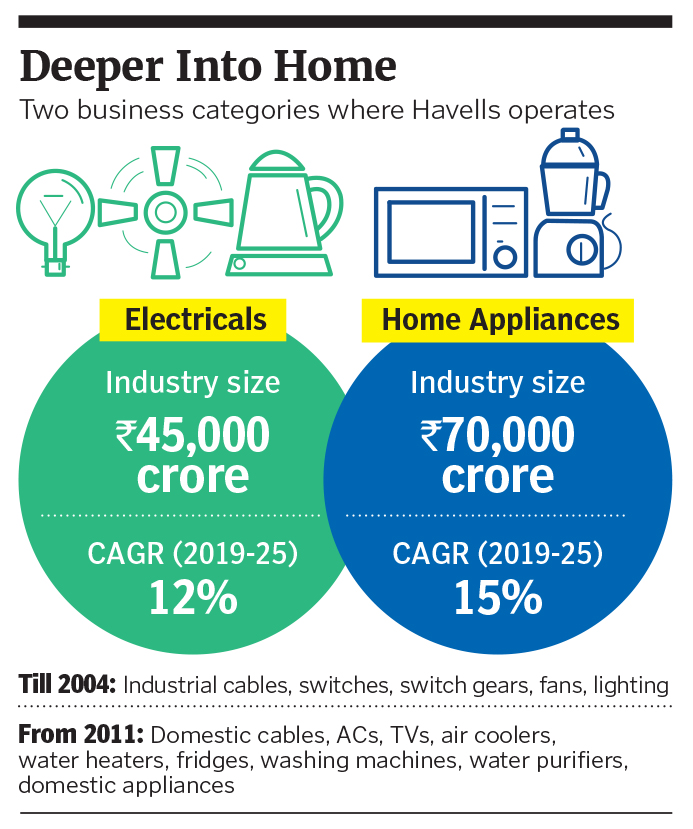 While giving credit to the South Korean rivals for expanding the market and bringing in the right products, Gupta feels that the MNCs haven’t got a real fight yet. The Indian companies, he lets on, just went away. Some disappeared due to the financial mess they waded into, others faded away because of poor quality, and a few more just threw in the towel as family infighting crippled them. “Where was the big fight?” he asks. Havells, he points out, is again backing its instinct to make it big in the new segment. He uses the example of lighting, which it entered in 2003, when the odds were heavily stacked against Havells. It was a crowded and fiercely competitive market dominated by Bajaj, Crompton, Philips and Surya. Rivals mocked its audacity, and analysts predicted a regional role for Havells. “We are the second biggest in the segment today,” he says. 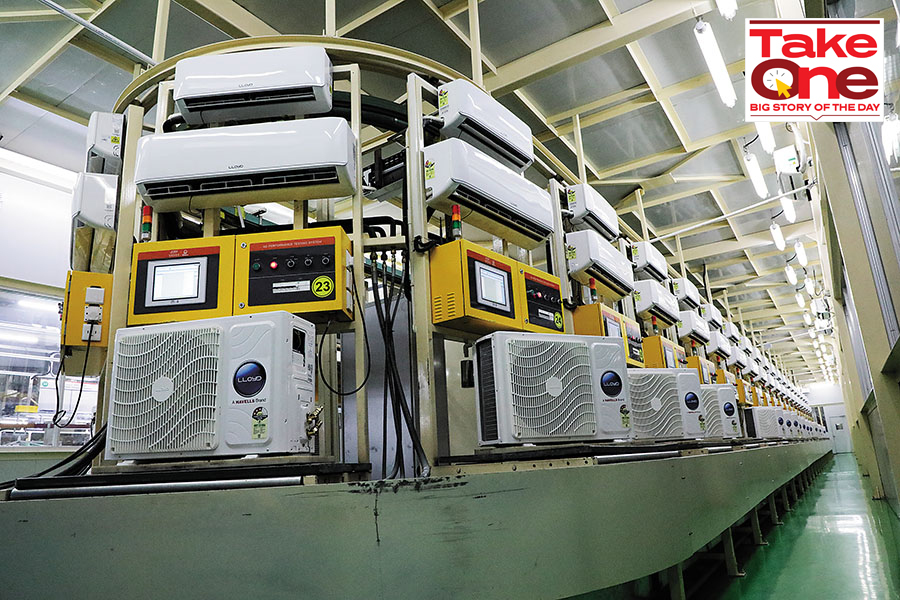 The highly automated Lloyd AC plant at Ghiloth, Rajasthan. In 2017, Gupta bought the consumer business division of Lloyd Electric
Courtesy: Havells Can Havells become top dog in all its businesses? Gupta answers by asserting what he won’t change. “He (Qimat Rai Gupta) wanted it to be honest, transparent, nimble and quick,” he says. “I am walking down the same road,” he adds. “We are an Indian company, born in India, very proud of our lineage and the quality we churn out.”

Tweets by @forbes_india
Digantara: Eye in the sky
Photo of the Day: Where there's a will...