Digantara: Eye in the sky 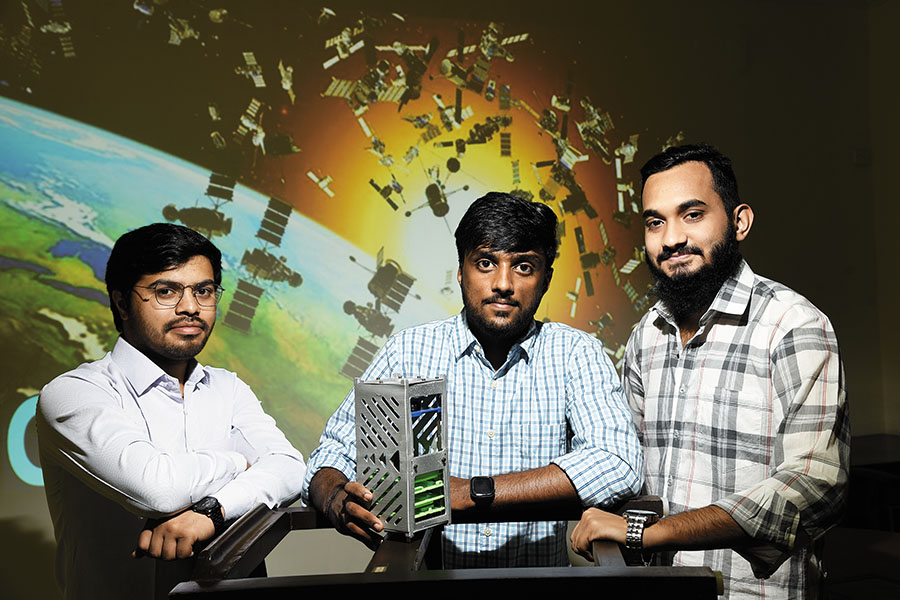 More than 60 years since Sputnik, the world’s first satellite, launched into low Earth orbit, thousands of space launches have taken place. And they’ve littered the heavens with spent satellites, broken rocket parts and other junk.

Such abandoned fragments are one of the biggest threats to spacecraft, says the European Space Agency. According to the latest data, there are about 5,000 satellites in space. More than 3,000 of these are no longer operational. Break-ups, explosions and collisions mean that about 34,000 pieces of debris longer than 10 cm, 900,000 between 1 cm and 10 cm, and 128 million between 1 mm and 1 cm are estimated to be in orbit. As these bits hurtle across space at speeds of nearly 29,000 km per hour, they can cause lethal damage. A marble-sized piece of debris can shatter an entire satellite.

While ground-based systems have tried to identify and monitor the trajectories of such clutter, they are only able to track objects bigger than 10 cm in size. One Indian startup is trying to change that.

Bengaluru-based Digantara, founded by three 20-somethings, is looking to track space debris from space itself and it’s one of the handful of companies in the world doing so.

The team’s patented in-orbit space debris monitor, as they call it, combines hardware with a software solution. The hardware, attached to a nano satellite that will go into space, has a laser module that can track objects between 1 cm and 20 cm in size. The data is relayed to Earth and processed to predict the future trajectory of the object. “That’s where the software stack comes in… we build a visualisation model of all the objects we have tracked and form a catalogue,” says Anirudh Sharma, 22, Digantara’s co-founder and CEO.

A computer science engineering student at Lovely Profession University (LPU), Punjab, Sharma says he was always interested in aerospace and aeronautics. A discussion with friend Tanveer Ahmed, 22, who had started a student satellite team under Indian Space Research Organisation’s (ISRO) guidance at the RV College of Engineering, Bengaluru, where he was studying at the time, led Sharma to do the same at LPU. “We formed a small student club to build a nano satellite and work on things space-related. But no one really took us seriously,” smiles Sharma. It’s only when they took part in an ISRO-led conference in Chandigarh and won an award for the paper they presented that the management and other students at the university started taking note. Soon after, a Latin American space company asked them to fabricate a satellite component for them. “It was because of the cost aspect that they reached out to us. India is cheaper,” says Sharma. The student team delivered on the requirement and received a $1,000 cheque in return. “They helped us take our student satellite team commercial. Because we had to provide them with an invoice in the name of our company… that’s how we incorporated Digantara [in 2018],” he says. The money earned was used as seed capital for the new business.

Meanwhile, Ahmed joined Digantara as co-founder and chief technology officer as did Sharma’s LPU mate Rahul Rawat, 21. The trio took part in conferences, both in India and abroad, wrote papers and absorbed as much as they could about the most pressing issues in space. At a conference in Germany, they were introduced to the concept of ‘space situational awareness (SSA)’ or the monitoring of natural and artificial objects in orbit from space itself and predicting where those objects will be at any given time. Given the extent of garbage circling the Earth, the youngsters thought it a worthwhile problem.

Shortly after the trio graduated, the Society for Innovation Development (SID) at IISC Bengaluru agreed to incubate them. “We were impressed by two things,” says CS Murali, chairman of the entrepreneurship cell at SID. “One, as students, the team had already achieved so much. Two, their commitment and understanding of the domain were phenomenal. They not only knew the technical aspects of their chosen area but also the market-related aspects.”

As part of the incubation programme, SID provided Digantara with ₹25 lakh in grant money, while another ₹25 lakh came from the government. The team is now working on a demo mission slated for Q4FY21. It will involve sending a nano satellite, complete with the in-orbit monitoring device, into an area in space where debris, around 10 cm in size, have already been tracked and documented by ground-based systems. If Digantara’s solution is able to identify the same pieces of debris correctly, the mission will be successful, explains Sharma.

A major challenge, however, is lead time for the components needed from various vendors to build the device. Covid-19-related delays have led to higher lead times, which can potentially delay the demo. Says Rawat, “The timeline is very crucial as the SSA market is evolving and technologies are in the development phase across the globe, so it is all about who goes to space first.”

That Digantara’s work is on track is affirmed by a partnership the startup recently struck with Telespazio. The Italy-based, half-a-century-old spaceflight services company is developing a software for satellite operators to provide operations-as-a-service. They were in need of SSA data and reached out to Digantara. “It is important to have an early adopter like Telespazio before you even launch your product,” says Sharma. “It tells us that the product is on track and also allows us to tailor our product to what the market needs.”

Eventually, Digantara hopes to sell its data to customers like governments and defence agencies as well as commercial space companies. “We can help them cut mission operation costs by 70 percent by providing such data,” says Sharma. Companies who provide insurance for satellites will also be interested in such data, which will be sold on a subscription basis.

With the Indian government opening up the space sector to private companies, the opportunities are plenty for Digantara. Says Telespazio’s Andres Martinez, director of business development, commercial space, “India is currently shifting the focus into commercial space and this can present new opportunities not only for Digantara but also for investors around the world.”

Late last year, Telespazio bought a stake in NorthStar Earth and Space, a Canadian startup working on the same problem as Digantara. So will it pick up a stake in Digantara too? “We want to enable companies like Digantara, as we see their potential to become a disruptive player in the future space economy with their innovation solutions and services… We will follow closely the development of the Indian ‘new space’ sector and assess the opportunities that come our way at the right time,” adds Martinez.

Tweets by @forbesindia
Teenpreneurs: This 18-year-old's invention can help early detection of oral cancer
Havells: Punching above its weight, and winning