Positioned as a new-age FMCG company, Future Consumer is rapidly gaining ground on the back of unique customer insights, innovative products and modern retail channels 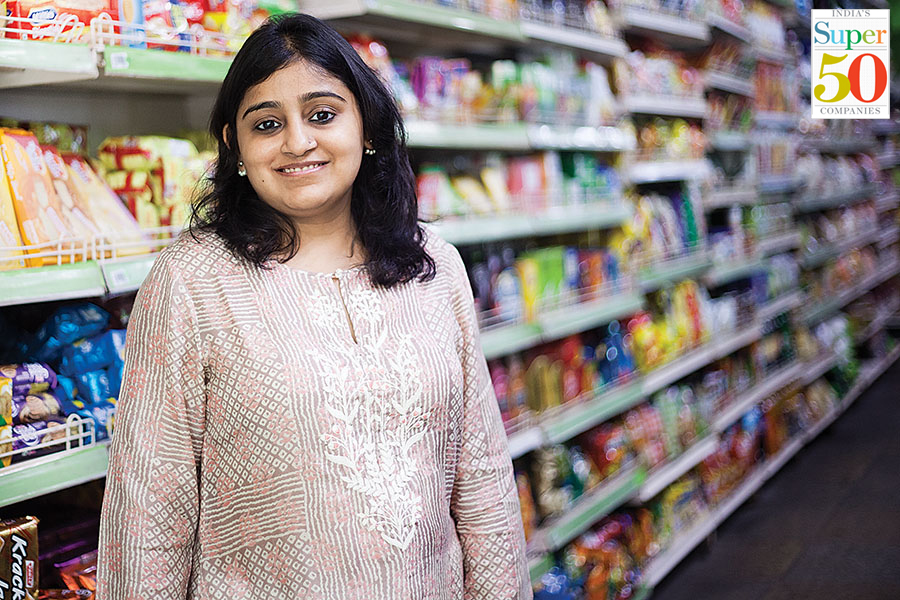 A bell tinkles and an announcement booms through the supermarket, calling buyers to gather near the cashier. Kosh, a new brand of oats, is available for free tasting, says the voice on the microphone. Within minutes, the Big Bazaar store in suburban Mumbai sees people gravitate towards the meeting point. Swiftly, a store attendant gets to work: He pulls out a packet of masala-flavoured oats, tosses it into a pan and cooks it for his audience. Customers taste spoonfuls and nod in approval; suddenly there’s a burst of interest in the Kosh packets that line the shelves nearby. Supplied by Future Consumer—the food and FMCG arm of Kishore Biyani’s Future Group—they come in a variety of flavours, including Lively Lemon and Chinese Chilli.

While in-store promotions such as these aren’t new to the supermarket business, they work favourably for Future Consumer. Their products get prominent shelf space at modern trade outlets like Big Bazaar, Easyday and Nilgiris (which form a part of Future Retail, the Future Group’s retail arm), and access to a captive set of customers. Advertising and marketing outlays, as a result, are lower, time to market is shorter and the proximity to customers provides Future Consumer with a clue to their changing needs and preferences.

All this has resulted in financial reward for the BSE- and NSE-listed company that was culled out of the Future Group only five years ago. Sales growth has rocketed from ₹1,703 crore in FY16 to ₹3,005 crore in the fiscal ended March 2018, clocking a compounded annual growth rate of 32 percent, while shareholder return has grown by an impressive 358 percent during the same period. The company also turned Ebitda (earnings before interest, tax, depreciation and amortisation) positive in FY17, with analysts expecting it to turn profitable after tax by mid-FY20. (Ebitda in FY18 stood at ₹66 crore.) 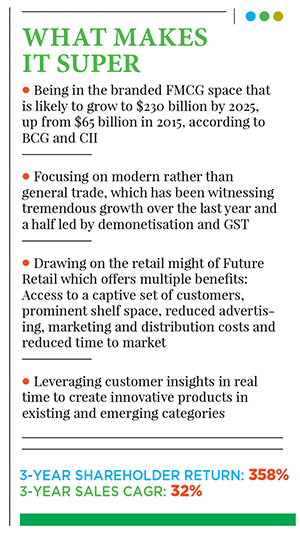 “Future Consumer is all about FMCG 2.0,” says Ashni Biyani, 34, who serves as managing director. Unlike other FMCG companies that first create a product and then make it relevant for consumers by branding, marketing and selling it, Future Consumer works backwards, says the Future Group founder’s older daughter. “Ours is a consumer-first model. We’re hungry to understand what the gaps are for the consumer and then look at how we can best serve them,” she says.

Additionally, FMCG 2.0 focuses on modern retail as the main distribution network, rather than kirana stores, as is the case with traditional FMCG. Therein lies the opportunity for Future Consumer. Not only is FMCG as a category hugely attractive in a rapidly growing market like India, also modern trade in particular is seeing an uptick. “Over the last year and a half, there has been a dramatic shift from general trade towards modern trade led by demonetisation and subsequently GST,” notes an analyst at a leading financial firm who covers Future Consumer. With more than 80 percent of Future Consumer’s sales coming from modern trade outlets—majority from Future Retail spaces, and the rest from other supermarkets like Godrej Nature’s Basket and Star Bazaar—the company stands to benefit. “Their biggest advantage is the existing stores they have,” says the analyst, referring to the group’s retail footprint of over 1,300 outlets ranging from supermarkets like Big Bazaar to smaller-format stores like Easyday and Nilgiris as well as its wholesale store network Aadhaar. As a result, distribution costs which account for around 20 percent of sales for most FMCG companies are much lower for Future Consumer.

Echoes Arvind Singhal of consultancy Technopak Advisors, “Getting shelf space is a challenge for FMCG companies. Not so for Future Consumer. Within Future Retail, they are able to get high visibility for their brands.”

Besides, the closeness to customers gives Future Consumer unique insights into their changing requirements. With a food park in Karnataka that manufactures and markets the company’s products, including those that they have in partnership with other suppliers, Future Consumer is able to act on those insights in real time and push out products with agility. So much so that the company pegs itself as “India’s first sourcing-to-supermarket food company”.

“Based on our insights, we either create new categories [of products], build on existing ones or create price disruption,” says Sadashiv Nayak, a Future Group veteran who was appointed interim CEO of Future Consumer earlier this year, after the previous chief Devendra Chawla put in his papers. The introduction of Kosh—positioned as a healthy replacement for traditional flour eaten in most Indian households—is an example of this. The palm-sized packaging catering to a single serving, the variety of flavours to suit changing palates and the ease of cooking—“Like Maggi, you can make it in two minutes,” said one attendant at the Big Bazaar store in suburban Mumbai—all cater to the convenience-seeking consumer of today. ‘Desi Atta’, a range of packaged flour and ready mixes, including products like spinach wheat that are positioned as convenient cooking aids, is another example. In the home and personal care category too, Future Consumer has innovated, albeit on the pricing front. The company’s ‘Think Skin’ range of body washes for instance, are priced 30 percent less than competing body wash brands. This allows Future Consumer to market them as handy alternatives to bars of soap and capture an entire segment of users who otherwise shy away from the category because of the premium prices.

To streamline innovation, Ashni has put in place a culture of “holacracy rather than hierarchy” where teams and individuals are empowered with autonomy and decision-making abilities. “This encourages entrepreneurship and innovation,” she says, “and gives us the ability to think non-linearly.” At weekly town hall meetings, employees pitch ideas for new products and those that appear to add value are taken up for further consideration.

Quick-footed and agile as the organisation may be, challenges remain. While Future Retail provides immense opportunity to Future Consumer on the distribution front—at present, only 15 percent of the products on display are those from the Future Consumer stable; this figure that could go up to about 60-65 percent, says the analyst—Singhal contends that to “really grow volumes” Future Consumer will have to look beyond Future Retail outlets. “Whether it’s HUL, ITC or Marico, their products are available in a couple of million retail outlets across India. Merely being present in Future Group outlets is not sufficient if they want to become a ₹10,000-crore company,” says Singhal. 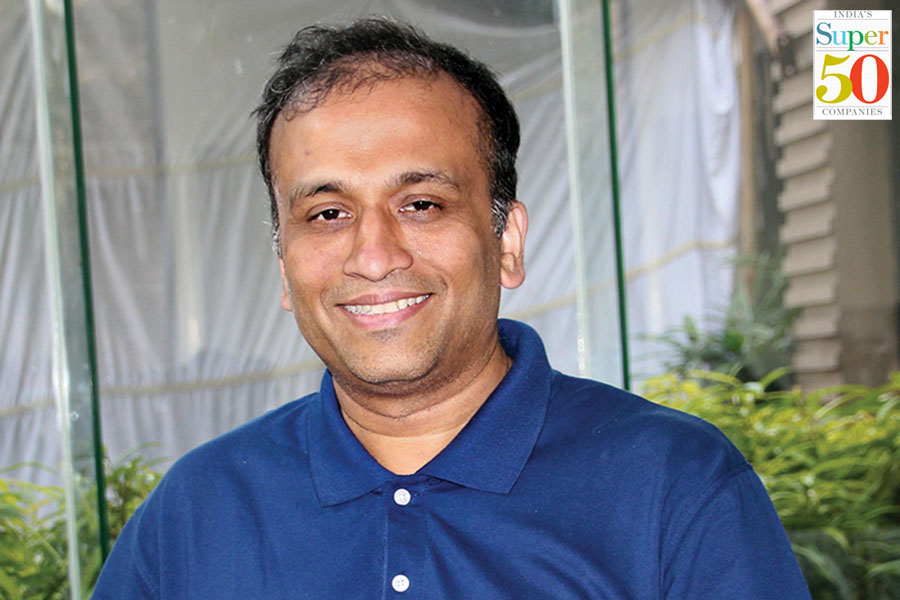 Sadashiv Nayak was appointed interim, CEO earlier this year
Second, as many of Future Consumer’s brands are still young and relatively unknown, the company will have to invest in brand building. “That is an extensive and time-consuming exercise,” adds Singhal. Mindful of this, earlier this year, Future Consumer roped in Bollywood actor Varun Dhawan to promote its Tasty Treat range of biscuits and snacks and launched several campaigns with him during the Indian Premier League (IPL) matches. “It’s only for our super brands–or those that have crossed ₹50 crore in revenue–that we will launch such measures,” says Ashni, adding that Tasty Treat hit ₹100 crore in sales in FY18, growing at 45 percent over FY16.

Maintaining such a cautious approach on the advertising and marketing front will be key as Ebitda margins remain depressed at about 2-3 percent, compared to the industry average of about 15 percent. “If they spend too much on brand creation from a general trade perspective it will also eat into their profitability prospects. I would rather they don’t spend too much on this front for the next five years,” argues the analyst. Margin expansion can instead be achieved by shifting focus from “low margin, commoditised” products like pulses, fruits and vegetables to higher margin processed foods and branded categories.

Moreover, with debt at 40 percent of equity, Future Consumer is highly leveraged, contends the analyst. But as margins improve and profitability kicks in—by mid-FY20, he predicts—their liabilities will reduce. Better margins will also translate into better terms of trade with retailers, allowing the company to cut its working capital requirements.

“Achieving margins of 10-15 percent is our aspiration,” says Ashni. “You have to remember, we’re a young company. We’ve achieved a lot but we still have a long way to go.”

Tweets by @forbesindia
IndusInd Bank: A cut above
A Mercedes Sofa, Glenlivet's new mystery whisky and other luxury possessions