IndusInd Bank: A cut above

In the last decade, led by MD & CEO Romesh Sobti, IndusInd Bank has seen its business soar. It is now eyeing the rural sector while keeping a hawk's eye on asset quality 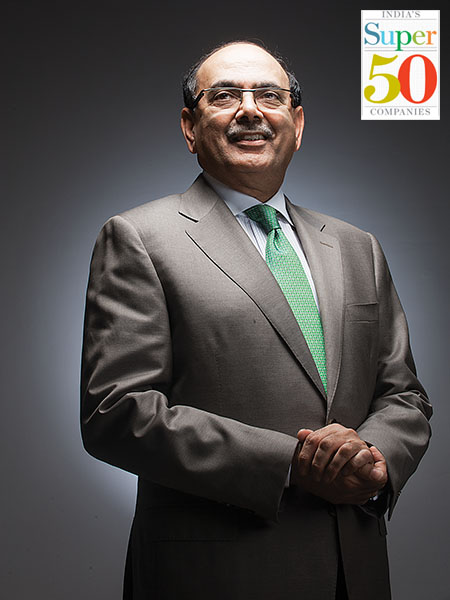 Given the mountain of bad loans piling up in the books of banks, dark clouds of a crisis have been hovering over the Indian financial system. Nearly a dozen state-run banks are under regulatory watch besides two high-profile CEOs from the private sector—Chanda Kochhar of ICICI Bank and Shikha Sharma of Axis Bank—coming under the scanner for governance issues. Amid the gloom, IndusInd Bank, led by its MD & CEO Romesh Sobti, appears to have muscled its way to find its rightful place under the sun.

Sobti, 68, took charge of the Mumbai-headquartered lender in February 2008, when IndusInd was a dwarf compared to its peers. Since then, the bank, promoted by the Hinduja Group, has seen a near-15-fold jump in profit, a six-fold jump in net interest income, a well-diversified loan book and an improvement in several key performance metrics.

The growth has been steered by Sobti, who came from ANZ Grindlays Bank (now Standard Chartered Bank), succeeding Bhaskar Ghose. Bringing in a new team, Sobti set about to restructure the balance sheet, boost profitability, improve the business mix and expand through current account-savings account (CASA) growth and acquisitions.

When Sobti took charge, IndusInd had a high share of relatively low-yielding fixed rate loans in its book. At a meeting with analysts in January 2008, the bank said that only around 31 percent of its total loan book was on floating rate and most of it (67 percent) was fixed-rate loans. A floating rate helps a bank improve its earnings projections and net interest margins. Sobti has since ensured that the bank has a better mix. Now, of the total corporate loans, 60 percent is linked to the Reserve Bank of India’s (RBI) marginal cost of funds-based lending rate (MCLR) and out of total loans, 40 percent is linked to MCLR. Its corporate loan book has a tenure of 270 days on an average. 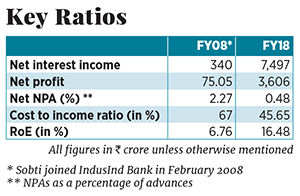 On the asset side, one of the key moves has been the diversification of the loan book. Prior to Sobti’s term, in June 30, 2007, consumer finance formed 58 percent of IndusInd’s total loan book (most of it was commercial vehicle loans), while lending to mid-sized corporates comprised the rest.

More than a decade since, IndusInd has learnt to focus on the corporate sector by lending to large-sized companies as well. In the April-June quarter of FY19, consumer finance formed 40 percent of the total loan book and 60 percent was lending to corporates (in the services sector, microfinance, real estate and NBFCs) while its exposure to riskier sectors such as roads, infrastructure and power generation is much lower.

Even within the consumer finance book, the bank has diversified to lower the risk of exposure to one segment—commercial vehicles (CVs). IndusInd carries the legacy of Ashok Leyland Finance, which was merged with it in late 2003. The bank has therefore always focussed on its strength as a lender to CVs. A third of its consumer finance lending is towards CVs at ₹20,703 crore out of a loan book of ₹60,264 crore. Now it has expanded lending towards secondhand CVs, equipment financing, tractors, cars, small CVs and utility commercial vehicles.

“The bank has also consciously ensured a lower exposure to project finance,” says Rakesh Kumar, banking analyst at Elara Capital. Infrastructure project lending has been a pain point for several state-run banks in the past few years, as stalling of many projects has contributed to the bad loans problem.

IndusInd has also strengthened its position by improving its CASA franchise, at a time when larger private lenders HDFC Bank, ICICI Bank, Axis Bank and Kotak Mahindra Bank have been equally aggressive in their drive. 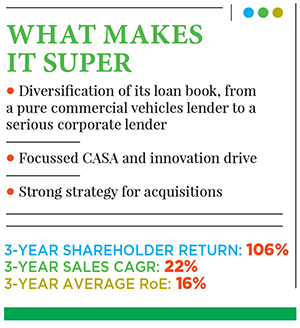 Initially, IndusInd was not a recognised brand and hence for several years, attracting low-cost deposits was difficult, until Sobti set this right. Between 2011 and 2015, the bank raised additional capital, opened more branches and introduced innovative products such as cash on mobile, choice of notes’ denomination at ATMs, fingerprint banking and the choice of account number.

Before Sobti took charge, IndusInd’s savings accounts as a share of total deposits were only 6 percent in the fourth quarter of FY08 and the overall CASA ratio was 15.7 percent. Now, as of June 2018, savings accounts are 30 percent of total deposits and overall CASA ratio is 43.4 percent. A higher CASA ratio means a higher share of the deposits of the bank come from current and savings deposits—a cheaper source of funds as banks don’t usually pay interests on current account deposits and the interest on saving accounts is low.

All these measures have brought immense wealth to investors as IndusInd’s stock price has jumped nearly 22 times, to around ₹2,015 apiece on BSE on August 3, 2018, from ₹93.5 on February 1, 2008, when Sobti joined.

This does not suggest that IndusInd has insulated itself from the larger bad loans crisis that has enveloped the banking sector. While its gross non-performing assets (NPAs) have not soared over the past year, Elara’s Kumar is not ruling out fresh slippages. The bank has come under the scanner for underreporting NPAs in two consecutive years FY16 and FY17—an RBI audit had found IndusInd had higher NPAs than it reported. The bank was fined ₹3 crore for non-compliance in FY16, while for FY17, the bank said NPAs had been provided for in a previous quarter.

This has not gone down well with some experts. “In any company, accounts must be trusted. It is shameful for any bank to misreport accounts for a single year; for a bank to report two successive years of fudged accounts without any accountability for its CEO and the auditor speaks volumes on the quality of corporate governance,” says Hemindra Hazari, independent banking analyst who publishes his writings on Singapore-based research platform Smartkarma.

The bank sees this as a non-issue. Now that its balance sheet has improved and it has achieved scale, it is focussed on strengthening its rural banking business and improving market share through acquisitions. Two acquisitions—Bharat Financial Inclusion Ltd (BFIL, formerly SKS Microfinance) and the securities business of IL&FS—are likely to be complete in the next 4-5 months.

“IndusInd will have an unsaturated customer base [from BFIL] and the bank will also be in a position to cross-sell its products,” says Kumar. BFIL has about 1,400 branches in 322 districts and a customer base of 7 million.

However, Kumar warns that the accruals from the merger will take time and the bank will need a different strategy for the new BFIL customers. The second acquisition, through the IL&FS deal, will help the bank scale up its capital market business where the IL&FS subsidiary offers clearing, depository and custodial services.

So, while IndusInd Bank appears to have ticked off several of the right boxes, its toughest phase starts now.