On the back of trust, transparency and innovation, the Thrissur-based Kalyan Jewellers has risen to national and international prominence 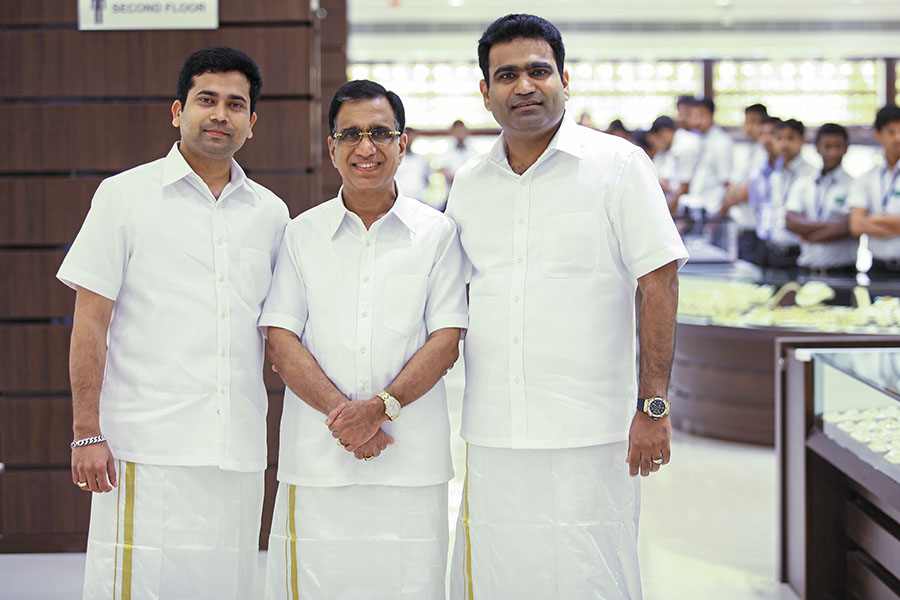 TS Kalyanaraman (centre), founder and CMD of Kalyan Jewellers, with sons Ramesh (left) and Rajesh, who are executive directors. They want revenues to touch around Rs 15,000 crore in three years


In a large, well-lit Kalyan Jewellers store in suburban Mumbai, a salesperson assists a couple pick out designs for their soon-to-be-married daughter. Elsewhere, a lady preens into a mirror, holding up glittering hoops against her ears. A red necktie-wearing salesman looks on intently. Amid the neatly arranged rows of necklaces, bangles, rings and earrings, what Kalyan Jewellers is really selling is trust. “Integrity is everything in the jewellery business,” says TS Kalyanaraman, 70, the founder and CMD of the company. “That was the most important lesson I learnt from my elders.”

Trust isn’t something new to the businessman. Over two decades ago, it’s this reputation that helped Kalyanaraman segue from his family business of textile manufacturing and retailing (set up in 1903) to his current calling. He recalls the overwhelming number of customers who would come to the family store—mostly to shop for weddings—and ask him to sell jewellery that would go with their clothes. If he sold ornaments, they would certainly buy from him, they would tell him. Their confidence inspired Kalyanaraman to open his first store in Thrissur, Kerala, in 1993. Today, Kalyan Jewellers has 82 showrooms in India, and 23 in the Middle East. Revenues stood at Rs 9,834 crore in FY16, up by 15 percent from the previous fiscal and well ahead of the Rs 8,700 crore notched by the country’s biggest listed jeweller, Titan, a Tata group company.

Right from the beginning, Kalyanaraman changed the play in a sector riven by malpractices. He stocked ready-to-wear ornaments at a time when made-to-order was the norm, introduced detailed rate tags and educated customers on how to verify the purity of gold. Even his first store, at 4,000 sq ft, was more than ten times the size of a regular jewellery store at that time. It is this “customer-centric model” that defines Kalyan Jewellers’ leadership position, says Vishal Mahadevia, managing director and co-head, Warburg Pincus India, which picked up an undisclosed minority stake in the jewellery chain for Rs 1,200 crore in 2014, representing the largest such investment in the jewellery industry in India. “They have successfully challenged conventional beliefs and created a strategy that has brought a noticeable shift in industry standards while expanding their geographical footprint,” says Mahadevia.

Kalyanaraman made sure the expansion didn’t come at the cost of quality. He opened his second showroom, also in Kerala, seven years after the first. “My father wanted to be steady with the first showroom before expanding,” says older son Rajesh, 41, who entered the business in 1993 and looks into procurement and finance. Younger son Ramesh, 39, got involved with the business in 1998 and oversees marketing. Kalyan Jewellers went on to open showrooms across South India, and, in 2012, expanded into the western and northern regions of the country, roping in superstar Amitabh Bachchan as brand ambassador.

Over the next three years, the trio is targeting revenues of around Rs 15,000 crore as well as about 170 stores across India and abroad. The figures may sound ambitious, but with trust and professionalism continuing to be their bedrock, the future, clearly, glitters for Kalyan Jewellers.