Beneath the Surface: How Hindustan Zinc grew to become the world's second largest zinc producer

With Vedanta buying a majority stake, Hindustan Zinc has gone from deep losses to becoming the group's most profitable unit 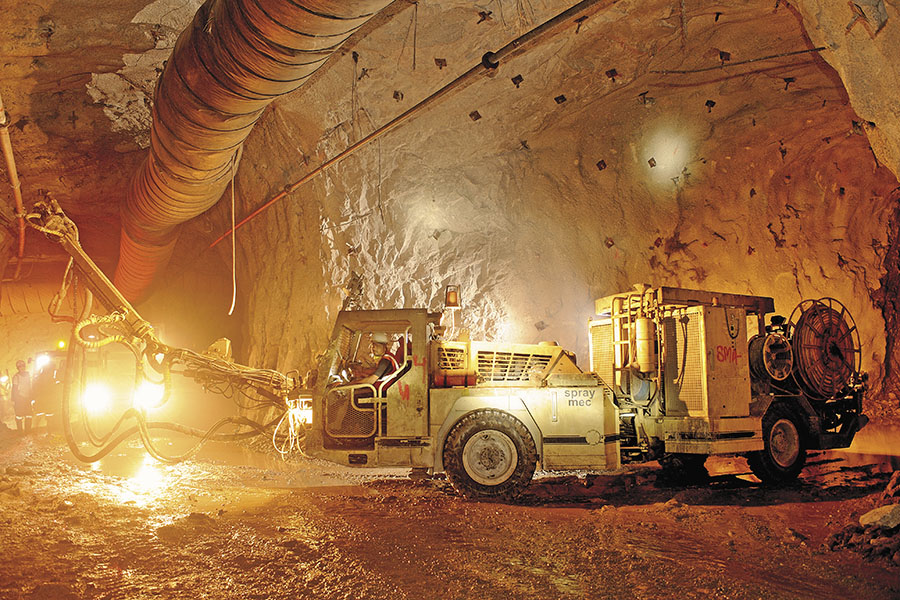 A 100-tonne truck emerges from pitch darkness and rumbles past us. Outfitted with helmets, rubber boots and fluorescent overalls, we’re seated in an SUV, waiting to plunge into the same abyss. Around us hills dot the dry landscape.

We’re at the mouth of Sindesar Khurd, an underground zinc-lead mine operated by Hindustan Zinc in Dariba on the outskirts of Udaipur in Rajasthan. About an hour ago, a blasting had been carried out in the 500-metre deep mine. The truck that crossed us had scooped up the broken rock and was on its way to a nearby mill where the zinc-lead ore would be separated from the waste.

This extraction of zinc and lead—and silver as a by-product—is a thriving business; one that has catapulted Hindustan Zinc from deep losses, when it was a government run-entity, to huge profits after Anil Agarwal’s Vedanta Ltd (formerly Sesa Sterlite) bought its first tranche of the company’s shares in 2002. Last fiscal, the company—29.5 percent of it is still owned by the government—reported earnings before interest, tax, depreciation and amortisation (Ebitda) of Rs 9,734 crore on revenues of Rs 18,642 crore. Meanwhile, cash reserves stood at Rs 16,065 crore. This, despite declaring an interim and special dividend totalling Rs 27,157 crore—the highest ever paid by an Indian company in a single financial year, claims the company, which trades at Rs 274 on both the BSE and the NSE (as of July 14). “When our balance sheet became very fat, we decided to share the money with the government, our shareholders and us,” jokes Sunil Duggal, CEO, Hindustan Zinc.

Despite the huge outflow, the company’s expansion plans remain undented. With a current output of 1 million metric tonnes per annum (MMTPA) of refined metal, Hindustan Zinc is the second largest zinc producer in the world—after Anglo-Swiss mining giant Glencore—and seems well on its way to achieving a targeted output of 1.2 MMTPA by FY2019. It is among the world’s least expensive zinc producers, and also Vedanta’s most profitable unit. In India it enjoys a near-monopoly (the only other zinc producer, Binani Zinc, produces 0.03 MMTPA), meeting 80 percent of the domestic demand for the metal that is largely used as a coating to protect steel from rusting. Clearly, Duggal, 55, has much to smile about. 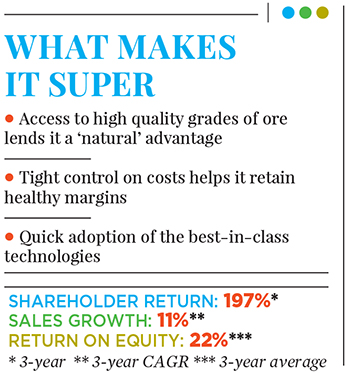 Our SUV makes its way into the mine. Floodlights blinking, we drive through the mine passages, first 300 metres underground and then another 200 metres further. The air becomes heavy and the darkness is interrupted by light bulbs hanging from the rock ceiling at intervals of a few metres. Jumbos—large vehicles that blast through the ore body—navigate the rocky terrain, making way for our car.

Huge mineral wealth is buried deep within those rocks. In fact, some of the richest ore bodies are found in the five zinc-lead mines owned by Hindustan Zinc, spread across Rajasthan. At Sindesar Khurd, the ore grade—the concentration of mineral within an ore—is 6 percent. While at Rampura Agucha—the company’s flagship mine, and also the world’s largest zinc-producing mine—the ore grade is even higher: “The open cast pit at Rampura Agucha has a grade quality of 13 percent, while the underground mine has a grade of 14.1 percent. Globally the average is about 3 percent,” says Ashutosh Somani, metals and mining analyst, institutional equities research, JM Financial.

This natural bounty has ensured that Hindustan Zinc maintains its advantage on the cost of production of zinc. At around $800 per tonne, the company’s cost of production is around 30 percent lower than that of its global peers, says Andrew Thomas, principal analyst, zinc markets, at Wood Mackenzie, an Edinburgh-headquartered research consultancy.

Remarkably, Hindustan Zinc has been able to maintain this cost over the years; around 15 years ago, at the time Vedanta stepped in, the cost was the same. What was different, however, was the price of zinc on the London Metal Exchange (LME). Back then it hovered around $800 to $850 per tonne, says Duggal, which meant that the company was largely loss making. So much so that in 2002 when Vedanta bid for a controlling stake in Hindustan Zinc, it encountered little competition; it bought a 26 percent stake from the government for Rs 445 crore, while another 20 percent was acquired from the public. (In 2003, Vedanta acquired an additional 18.9 percent stake from the government for Rs 324 crore, taking its total ownership in Hindustan Zinc to 64.9 per cent.)

Around the mid-2000s a China-driven commodities boom began, with the prices of oil to iron ore and zinc shooting up. Hindustan Zinc’s profits followed suit; in fact its margins only became fatter as its cost of production remained steady. 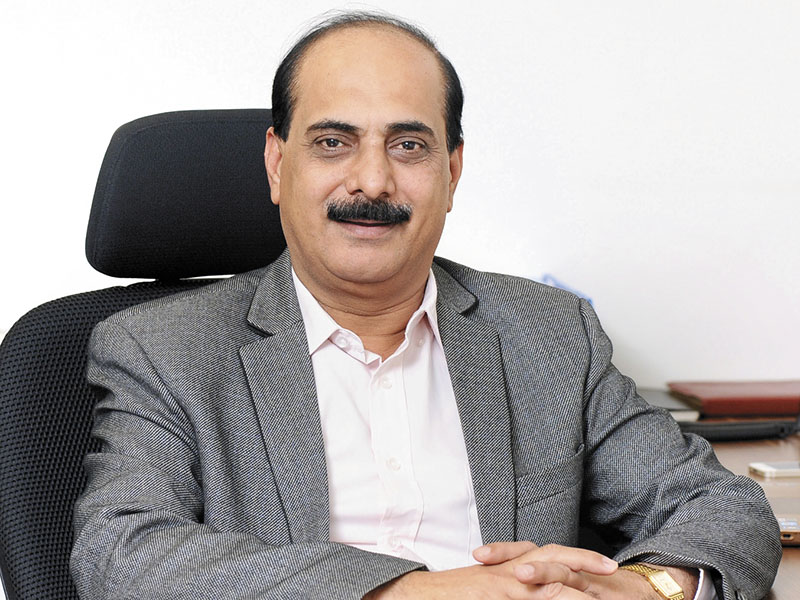 Today, zinc prices move between $2,500 to $2,700 per tonne on the LME. “We never look at commodity cycles when planning production,” says Duggal, pointing out that even at about $1,400 per tonne—the lowest zinc prices have sunk to over the last five to six years—Hindustan Zinc still pocketed a good margin, given its $800 per tonne cost of production. Even at the height of the global financial meltdown, in 2009, when zinc prices plummeted to around $1,100 per tonne and prompted producers worldwide to shut mines or halt production, Hindustan Zinc made money. “So that [global zinc prices] is not a topic for me. The only topic is first to control costs and second to increase volume,” adds Duggal.

Apart from the low cost of labour in India, Hindustan Zinc’s access to abundant, and high grade, ore is just one of the factors that enables it to maintain its low cost of production. After all, these resources were available to it even when it was an unprofitable, state-run company.

In fact, at the time of the Vedanta takeover in 2002, Hindustan Zinc produced only 0.2 MMTPA of refined metal. “Globally we were nowhere,” says Naveen Singhal, president and director, projects, at Hindustan Zinc. “But our chairman’s [Anil Agarwal] vision was to make the company a global first or second.”

Upping production was key to that vision. And so from 2003 to 2005, Hindustan Zinc undertook what Singhal describes as “Phase 1” of the expansion journey, targeting 0.5 MMTPA of ramped up capacity. The challenge however, was to keep capex costs low so as to make the project financially viable, given the low zinc prices at that time, says Singhal. Also, project delays had to be avoided so as not to get caught in a spiral of interest payments. “We engaged the best of contractors with the right technology and right infrastructure practices so that they could do our project right,” he says.

In addition to mine expansion, zinc and lead smelters, and the company’s first thermal captive power plant were built. “Our smelters are power intensive. If we didn’t have a power plant, firstly our costs would be higher, and secondly getting reliable power would be an issue. Without reliable power, we can lose millions of dollars in a day,” says Singhal. This integrated project was completed in record time and at a cost 40 percent lower than the global benchmark, because of the right technology partners, as well as the low cost of labour that India enjoys, he adds.

“ The integrated nature of their operations adds to their cost advantage.

By the time the project ended, metal prices started soaring and Hindustan Zinc began raking in the profits. Hungry for more, it eyed larger volumes, targeting 0.8 MMTPA of capacity expansion by 2008 as part of Phase 2. This time too the company ramped up not just its mines, but also the capacity of its smelters and power plants. “Each time we spent money, we spent it in all three areas,” says Singhal. The fact that Hindustan Zinc’s mines, smelters and power plants are located close to each other reduces transportation costs, while the power plants meet 94 percent of the company’s energy needs, says Somani. “The integrated nature of their operations adds to their cost advantage,” he says.

Currently, Hindustan Zinc produces 0.9 MMTPA of metal and is on track to meet its next target of 1.2 MMTPA by FY2019. As part of this phase, in 2012, it found that the open pit production at Rampura Agucha, responsible for 70 to 85 percent of the total output, was tapering. Exploration studies revealed that a kilometre beneath the earth’s surface the reserves were still rich. Swiftly, the management implemented a transition from open cast mining to underground mining. Here too, investments in world-class technology, including the bulding of 1 km-long shafts at Rampura Agucha and Sindesur Khurd mines, are underway to increase efficiencies. Digital technologies, such as wifi infrastructure within the mines, are also being built to connect their operations and resources in real time. “It is the next generation of underground mining,” says Duggal.

The challenge, however, will be to compensate for declining output from open cast mining, while still meeting the 1.2 MMTPA target. This is important for retaining volume and, therefore, cost advantage. At present, the company produces 0.4 MMTPA of metal from underground mining operations. “We are not going from 0.9 to 1.2 MMTPA, but from 0.4 to 1.2 MMTPA. It is a three-fold expansion,” says Singhal, adding that over the last 10 to 12 years the company has spent more than $3 billion on expansion work.

As we drive through the mine passages, making our way back to the top, the air becomes lighter. Metres away from the mouth of the mine sunlight floods into the SUV. The full extent of the riches that lie beneath the surface become astonishingly clear.

(This story appears in the 04 August, 2017 issue of Forbes India. To visit our Archives, click here.)

Tweets by @forbesindia
Symphony: Beating the heat with its air coolers
Labels we use, images we conjure, and policies we design