Americans are flush with cash and jobs. They also think the economy is awful

Workers have seized the upper hand in the labour market, attaining the largest raises in decades and quitting their jobs at record rates 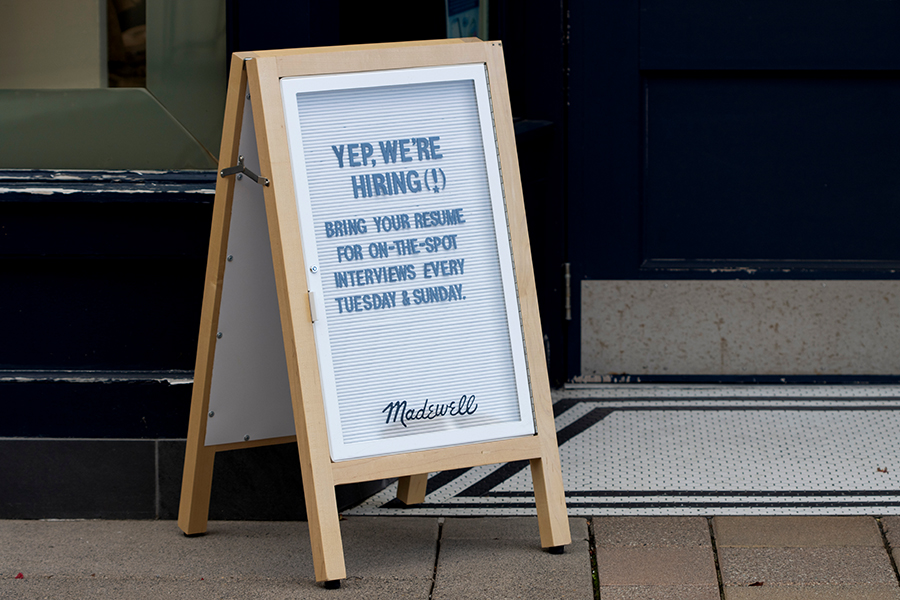 The hiring sign at the entrance to a Madewell retail store in Tigard, Oregon. Workers left their jobs at a record pace in August, led by food and retail industries.
Image: Shutterstock

Americans are, by many measures, in a better financial position than they have been in many years. They also believe the economy is in terrible shape.

This is the great contradiction that underlies President Joe Biden’s poor approval ratings, recent Republican victories in state elections and the touch-and-go negotiations over the Biden legislative agenda. It presents a fundamental challenge for economic policy, which has succeeded at lifting the wealth, incomes and job prospects of millions of people — but has not made Americans, in their own self-perception, any better off.

Workers have seized the upper hand in the labor market, attaining the largest raises in decades and quitting their jobs at record rates. The unemployment rate is 4.6% and has been falling rapidly. Cumulatively, Americans are sitting on piles of cash; they have $2.3 trillion more in savings in the past 19 months than would have been expected in the pre-pandemic path. The median household’s checking account balance was 50% higher in July than in 2019, according to JPMorgan Chase Institute.

Yet workers’ assessment of the economy is scathing.

In a Gallup poll in October, 68% of respondents said they thought economic conditions were getting worse. The share who thought things were getting better was lower than in April 2009, when the global financial crisis was still underway. And it is not merely a partisan response to the Biden presidency. In the University of Michigan’s consumer sentiment survey, Republicans rated current economic conditions worse than Democrats do — but both groups gave ratings about as low as they did in the early 2010s, when unemployment was much higher and Americans’ finances were a wreck.

The reasons seem to be tied to the psychology of inflation and the ways people assess their economic well-being — as well as the uneven effects that rising prices and shortages have on different families. The bleak assessment may also be shaped by the psychological scars of the pandemic, one manifestation of this being an era of exhaustion.

Regardless of the exact causes, after decades in which the availability of jobs (or lack thereof) drove economic sentiment, inflation appears to have become the more powerful force.

“The major issue is rising inflation and falling confidence in economic policies,” said Richard Curtin, who has overseen the University of Michigan survey for decades. “Consumers see rising prices, and they see no policies that would correct it.”

There is no doubt that prices are rising rapidly. The consumer price index is up 5.4% over the past year, and there are shortages and other inconveniences that do not show up in inflation data but reflect the same underlying phenomenon.

But that follows years of relatively low inflation; the index has averaged only 2.8% a year over the past three years. And higher prices have arrived at the same time — probably not coincidentally — as a surge of federal spending has inflated Americans’ bank accounts. This includes stimulus payments of $2,000 per person earlier in the year and a child tax credit worth up to $300 a month per child since the summer.

Americans seem to be relatively optimistic when asked more narrowly about the outlook for their incomes or for the job market.

“They’re telling us, looking ahead they expect business conditions to get better, they expect more jobs, and they expect incomes to rise,” said Lynn Franco, senior director of economic indicators at The Conference Board, a business research group. Its consumer confidence index fell a bit in late summer but rebounded in October.

To economists, higher wages and higher prices for consumer goods are two sides of the same coin, and a spurt of inflation creates both winners and losers. In the past few months at least, the public hasn’t appeared to view it that way — and inflation and related shortages seem to loom particularly large in their overall perception of the economy.

Any group of individuals might end up better or worse off in a time of elevated inflation, depending on whether they are debtors or creditors and whether their wages rise faster or slower than the particular goods they buy.

A restaurant worker who has received an 11% pay increase over the past year — the average for the leisure and hospitality sector, according to government data — probably has higher spending power despite high inflation.

But many people are losers in times of rising prices — and even those who may end up being net winners can end up feeling the pain of higher prices more intensely than the benefit of higher wages or more manageable debts.

About 13% of workers have a paycheck that is unchanged over the past year, according to data from the Atlanta Fed. Many retirees receive pensions that are not adjusted for inflation.

And it is middle- and high-income earners whose pay gains were least likely to have kept up with inflation. Over the 12 months ended in September, those in the top quarter of earners experienced 2.7% gains in hourly earnings, compared with 4.8% for the lowest quarter of earners. For lower earners, that follows years leading up to the pandemic in which pay gains exceeded inflation rates.

To get a better idea of why elevated inflation can contribute to such negative assessments of the economy, it helps to go beyond the details of wage and price trends in 2021 and turn to a piece of economic research from the 1990s conducted by Yale economist Robert J. Shiller.

He led surveys to try to ascertain why inflation, even at moderate levels, frustrated ordinary citizens so much more than economic theory implied it should. He found that people did not believe they would receive adequate pay raises to keep up with rising prices. He also found that people believed it would hinder overall economic growth and be harmful to national morale, and that it could fuel political chaos or damage national prestige.

That may be what makes the inflation surge such a tricky policy problem: It can be about something more profound than dollars in people’s pockets and the price of a gallon of gas.