The move signifies a vast expansion of China's nuclear arsenal, the cravings of an economic and technological superpower to show that, after decades of restraint, it is ready to wield an arsenal the size of Washington's, or Moscow's 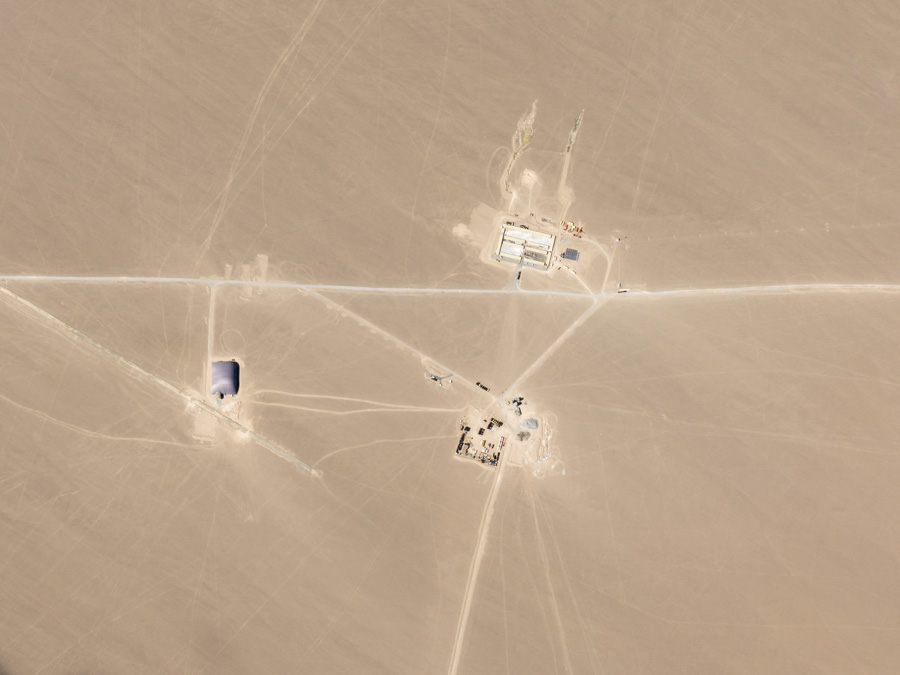 In an undated image provided by Planet Labs Inc., Chinese engineers erected an inflatable dome over the construction site of an underground missile silo, left, to hide the work below, while support facilities and temporary storage for construction equipment are seen at right. In the barren desert 1,200 miles west of Beijing, the Chinese government is digging a new field of what appears to be 110 silos for launching nuclear missiles — it is the second such field discovered by analysts studying commercial satellite images in recent weeks. (Planet Labs Inc. via The New York Times)

In the barren desert 1,200 miles west of Beijing, the Chinese government is digging a new field of what appears to be 110 silos for launching nuclear missiles. It is the second such field discovered by analysts studying commercial satellite images in recent weeks.

It may signify a vast expansion of China’s nuclear arsenal — the cravings of an economic and technological superpower to show that, after decades of restraint, it is ready to wield an arsenal the size of Washington’s, or Moscow’s.

Or, it may simply be a creative, if costly, negotiating ploy.

The new silos are clearly being built to be discovered. The most recent silo field, on which construction began in March, is in the eastern part of Xinjiang province, not far from one of China’s notorious “re-education” camps in the city of Hami. It was identified late last week by nuclear experts at the Federation of American Scientists, using images from a fleet of Planet Labs satellites, and shared with The New York Times.

For decades, since its first successful nuclear test in the 1960s, China has maintained a “minimum deterrent,” which most outside experts judge at around 300 nuclear weapons. (The Chinese will not say, and the U.S. government assessments are classified.) If accurate, that is less than a fifth of the number deployed by the United States and Russia, and in the nuclear world, China has always cast itself as occupying something of a moral high ground, avoiding expensive and dangerous arms races.

But that appears to be changing under President Xi Jinping. At the same time that China is cracking down on dissent at home, asserting new control over Hong Kong, threatening Taiwan and making far more aggressive use of cyberweapons, it is also headed into new territory with nuclear weapons.

“The silo construction at Yumen and Hami constitutes the most significant expansion of the Chinese nuclear arsenal ever,” Matt Korda and Hans M. Kristensen wrote in a study of the new silo field. For decades, they noted, China has operated about 20 silos for big, liquid-fuel missiles, called the DF-5. But the newly discovered field, combined with one hundreds of miles away in Yumen, in northeast China, that was discovered by the James Martin Center for Nonproliferation Studies in Monterey, California, will give the country roughly 230 new silos. The existence of that first field, of about 120 silos, was reported earlier by The Washington Post.

The mystery is why China’s strategy has changed.

There are several theories. The simplest is that China now views itself as a full-spectrum economic, technological and military superpower — and wants an arsenal to match that status. Another possibility is that China is concerned about American missile defenses, which are increasingly effective, and India’s nuclear buildup, which has been rapid. Then there is the announcement of new hypersonic and autonomous weapons by Russia, and the possibility that Beijing wants a more effective deterrent.

A third is that China is worried that its few ground-based missiles are vulnerable to attack — and by building more than 200 silos, spread out in two locations, they can play a shell game, moving 20 or more missiles around and making the United States guess where they are. That technique is as old as the nuclear arms race.

“Just because you build the silos doesn’t mean you have to fill them all with missiles,” said Vipin Narang, a Massachusetts Institute of Technology professor who specializes in nuclear strategy. “They can move them around.”

And, of course, they can trade them away. China may believe that sooner or later it will be drawn into arms control negotiations with the United States and Russia — something former President Donald Trump tried to force during his last year in office, when he said he would not renew the New START treaty with Russia unless China, which has never participated in nuclear arms control, was included. The Chinese government dismissed the idea, saying that if the Americans were so concerned, they should cut their arsenal by four-fifths to Chinese levels.

The result was a stalemate. At the very end of the Trump administration, Secretary of State Mike Pompeo and his arms control envoy, Marshall Billingslea, wrote that “we’ve asked Beijing for transparency, and to join the United States and Russia in crafting a new arms control agreement covering all categories of nuclear weapons.”

“It is time that China stopped posturing and began to comport itself responsibly,” they wrote.

But the Biden administration had concluded that it would be unwise to let New START expire with Russia simply because China refused to join. Once in office, President Joe Biden moved quickly to renew the treaty with Russia, but his administration has said that at some point it wants China to enter into some kind of agreement.

Those conversations have yet to begin. The deputy secretary of state, Wendy Sherman, is in China this week for the first visit of a senior American diplomat since Biden took office, though it is not clear that nuclear weapons are on the agenda. She is headed next to nuclear discussions with Russia.

At the White House, the National Security Council declined to comment on evidence of the expanding Chinese arsenal.

It is likely that American spy satellites picked up the new construction months ago. But it all became public after Korda, a research analyst at the Federation of American Scientists, a private group in Washington, used civilian satellite images to examine the arid hinterlands of Xinjiang province, a rugged area of mountains and deserts in northwestern China. He was hunting for visual clues of silo construction that matched what researchers had already uncovered.

The new construction site is in a remote area that Chinese authorities have cut off from most visitors. It sits roughly 60 miles southwest of the city of Hami, known as the site of a re-education camp where the Chinese government detains Uyghurs and members of other minority groups. And it is roughly 260 miles east of a tidy complex of buildings with large roofs that can open to the sky. Recently, analysts identified the site as one of five military bases where the Chinese forces have built lasers that can fire beams of concentrated light at reconnaissance satellites, mostly sent aloft by the United States. The lasers blind or disable fragile optical sensors.

“It’s not insane,” he said. “They make the United States target a lot of silos that may be empty. They can fill these silos slowly if they need to build up their force. And they get leverage in arms control.”

“I’m surprised they didn’t do this a decade ago,” he said.