The Chinese Communist Party is remaking the city, permeating its once vibrant, irreverent character with ever more overt signs of its authoritarian will

By Vivian Wang and Alexandra Stevenson 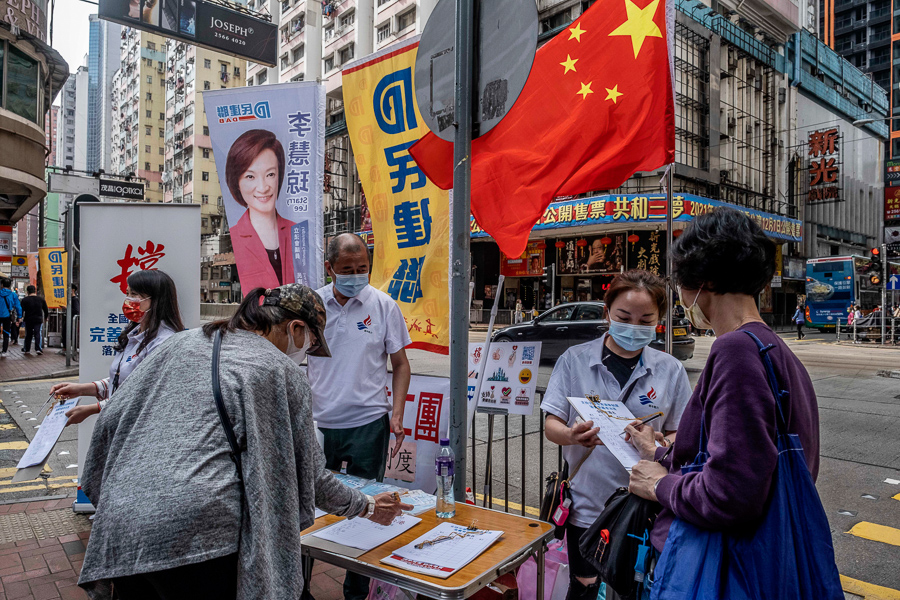 Pro-Beijing activists collect signatures in support of overhauling Hong Kong’s electoral system, March 11, 2021. The very texture of daily life in the vibrant city is under assault as Beijing molds Hong Kong into something more familiar, more docile, with ever more overt signs of its authoritarian will; Image: Lam Yik Fei/The New York Times

With each passing day, the boundary between Hong Kong and the rest of China fades faster.The Chinese Communist Party is remaking this city, permeating its once vibrant, irreverent character with ever more overt signs of its authoritarian will. The very texture of daily life is under assault as Beijing molds Hong Kong into something more familiar, more docile.Residents now swarm police hotlines with reports about disloyal neighbors or colleagues. Teachers have been told to imbue students with patriotic fervor through 48-volume book sets called “My Home Is in China.” Public libraries have removed dozens of books from circulation, including one about Martin Luther King Jr. and Nelson Mandela.Hong Kong had always been an improbability. It was a thriving metropolis on a spit of inhospitable land, an oasis of civil liberties under iron-fisted rule. A former British colony that returned to China in 1997, the city was promised freedoms of speech, assembly and the press unimaginable in the mainland, in an arrangement Beijing called “one country, two systems.”But under Xi Jinping, China’s leader, the Communist Party has wearied of Hong Kong’s dueling identities. To the party, they made the city unpredictable, even bringing it to the edge of rebellion in 2019, when anti-government protests erupted.Now, armed with the expansive national security law it imposed on the city one year ago, Beijing is pushing to turn Hong Kong into another of its mainland megacities: economic engines where dissent is immediately smothered.“People from all walks of life in Hong Kong have further realized that ‘one country’ is the prerequisite and foundation of ‘two systems,’” Luo Huining, Beijing’s top official in Hong Kong, said this month.Hong Kong is now a montage of scenes unfamiliar and, for many, unsettling. Police officers have been trained to goose-step in the Chinese military fashion, replacing decades of British-style marching. City leaders regularly denounce “external elements” bent on undermining the country’s stability.Senior officials in Hong Kong have assembled, right hands raised, to pledge fealty to the country, just as mainland bureaucrats are regularly called on to “biao tai,” Mandarin for “declaring your stance.”When the government ordered rank-and-file employees to sign a written version of the oath, H.W. Li, a civil servant of seven years, resigned.The new regulations do not merely require professions of allegiance; they also warn of termination or other vague consequences if violated. Li had heard some supervisors nagging his colleagues to fill out the form right away, he said, and employees competing to say how quickly they had complied.“The rules that were to protect everyone — as employees and also as citizens — are being weakened,” Li said.In some corners of society, the rules have been rewritten entirely. But Beijing denies it is reneging on its promises to Hong Kong, insisting that it is reinforcing them.When China overhauled Hong Kong’s election system to purge candidates it deemed disloyal, Beijing called the change “perfecting Hong Kong’s electoral system.” When Apple Daily, a major pro-democracy newspaper, was forced to close after police arrested its top executives, the party said the publication had abused “so-called freedom of the press.” When dozens of opposition politicians organized an informal election primary, Chinese officials accused them of subversion and arrested them.China’s power is now so omnipresent that Chan Tat Ching, once a hero of Hong Kong’s democracy movement, has spent the past year urging friends not to challenge Beijing.Three decades ago, after the Tiananmen Square massacre in 1989, Chan, a Hong Kong businessman, helped lead an operation that smuggled students and academics out of the mainland.But Beijing is more sophisticated now than in 1989, Chan said. It had cowed Hong Kong even without sending in troops; that demanded respect.He conceded that the security law had been enforced too harshly, but said there was little anyone could do.“Some young people don’t get it. They think the Communist Party is a paper tiger,” he said. “The Communist Party is a real tiger.” 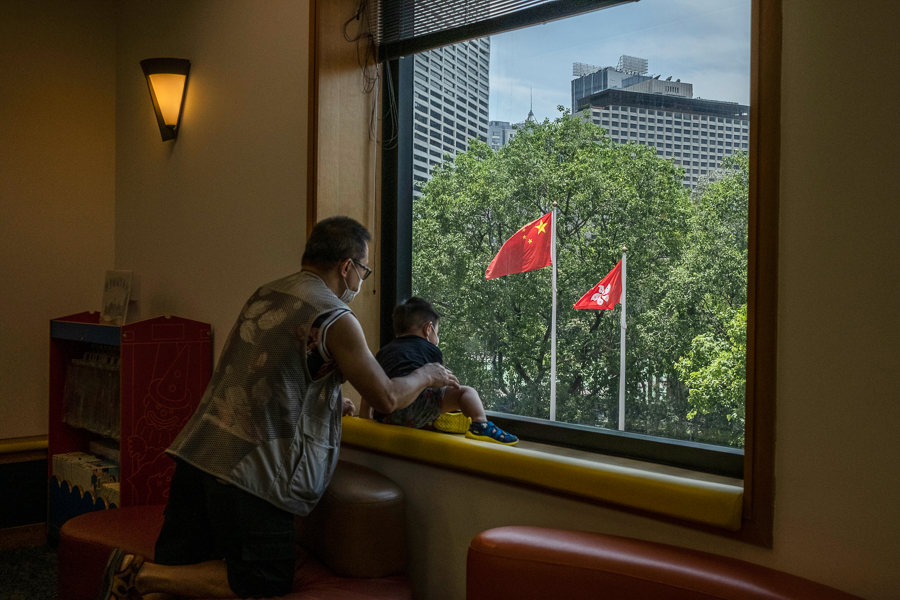 The Flags of China and Hong Kong fly outside the Central Library in Hong Kong, June 8, 2021. Public libraries have removed dozens of books from circulation, including one about the Rev. Dr. Martin Luther King Jr. and Nelson Mandela, as Beijing molds Hong Kong into something more familiar, more docile, with ever more overt signs of its authoritarian will; Image: Lam Yik Fei/The New York TimesChina’s new might has also declared itself in Hong Kong’s business world. For decades the mainland’s economy had raced to catch up with that of Hong Kong, the financial hub so proud of its global identity that its government billed it as “Asia’s world city.”Now, China’s economy is the booming one and officials are bending Hong Kong’s global identity increasingly toward that one country.

Chinese state-owned companies are moving into offices only recently vacated by foreign banks in Hong Kong’s iconic skyscrapers. In November, Meituan, a Chinese food-delivery giant, bumped Swire, a British conglomerate, off the city’s main stock index. Financial analysts called it the end of an era.The rush of mainland money has brought some new conditions.After Beijing decreed this spring that only “patriots” could stand for office in Hong Kong, Bank of China International — a state-owned institution — posted a job advertisement for a director-level post that said candidates should “love the country.”The central government is trying to convince Hong Kongers that the trade-offs are worthwhile in exchange for the mainland’s promise of prosperity. Officials are encouraging young Hong Kongers to study and work in the southern Chinese cities of Shenzhen and Guangzhou, declaring that those who do not go risk missing opportunities.Growing up in Hong Kong, Toby Wong, 23, had never considered working on the mainland. Her mother came from the mainland decades earlier for work. Salaries there were considerably lower.But recently, Wong saw a subway ad promoting openings in Shenzhen, with the Hong Kong government promising to subsidize nearly $1,300 of a $2,300 monthly wage — higher than that of many entry-level positions at home. A high-speed rail between the two cities meant she could return on weekends to see her mother, whom Wong must financially support.Wong applied to two Chinese technology companies.“This isn’t a political question,” she said. “It’s a practical question.”Eventually, the government hopes to make the motivation political. At the heart of Beijing’s campaign is a drive to raise future generations that will never think to separate the party’s interests from their own.The Hong Kong government has issued hundreds of pages of new curriculum guidelines designed to instill “affection for the Chinese people.” Geography classes must affirm China’s control over disputed areas of the South China Sea. Students as young as 6 will learn the offenses under the security law.Lo Kit Ling, who teaches a high school civics course, is now careful to say only positive things about China in class. While she had always tried to offer multiple perspectives on any topic, she said, she worries that a critical view could be quoted out of context by a student or parent.Lo’s subject is especially fraught; the city’s leaders have accused it of poisoning Hong Kong’s youth. The course had encouraged students to analyze China critically, teaching the country’s economic successes alongside topics such as the Tiananmen Square crackdown.Officials have ordered the subject replaced with a truncated version that emphasizes the positive.“It’s not teaching,” Lo said. “It’s just like a kind of brainwashing.” She will teach an elective on hospitality studies instead.Schoolchildren are not the only ones being asked to watch for dissent. In November, Hong Kong police opened a hotline for reporting suspected violations of the security law. An official recently applauded residents for leaving more than 100,000 messages in six months. This week, police arrested a 37-year-old man and accused him of sedition, after receiving reports that stickers pasted on the gate of an apartment unit potentially violated the security law.Constant monitoring through neighborhoods of informants is one of the Communist Party’s most effective tools of social control on the mainland. It is designed to deter people like Johnny Yui Siu Lau, a radio host in Hong Kong, from being quite so free in his criticisms of China.Lau said a producer recently told him that a listener had reported him to the broadcast authority.“It will be a competition or a struggle, how the Hong Kong people can protect the freedom of speech,” Lau said.Other freedoms once at the core of Hong Kong’s identity are disappearing. The government announced it would censor films deemed a danger to national security. Some officials have demanded that artwork by dissidents like Ai Weiwei be barred from museums.Still, Hong Kong is not yet just another mainland metropolis. Residents have proved fiercely unwilling to relinquish freedom, and some have rushed to preserve totems of a discrete Hong Kong identity.Masks marked “made in Hong Kong” have soared in popularity. A local boy band, Mirror, has become a font of hope and pride amid a resurgence in interest in Canto-pop.Last summer, Herbert Chow, who owns Chickeeduck, a children’s clothing chain, installed a 7-foot figurine of a protester — a woman wearing a gas mask and thrusting a protest flag — and other protest art in his stores.But Chow, 57, has come under pressure from his landlords, several of whom have refused to renew his leases. There were 13 Chickeeduck stores in Hong Kong last year; now there are five. He said he was uncertain how long his city could keep resisting Beijing’s inroads.“Fear — it can make you stronger, because you don’t want to live under fear,” he said. Or “it can kill your desire to fight.”

Tweets by @forbesindia
From 2007 to 2020: Here's how the iPhone has evolved
OPEC and allies hold the cards as prices and demand rise