In recent weeks, Facebook and Twitter accounts that originated in China acted in a coordinated fashion to amplify messages and images that portrayed Hong Kong's protesters as violent and extreme, the two social media companies said Monday 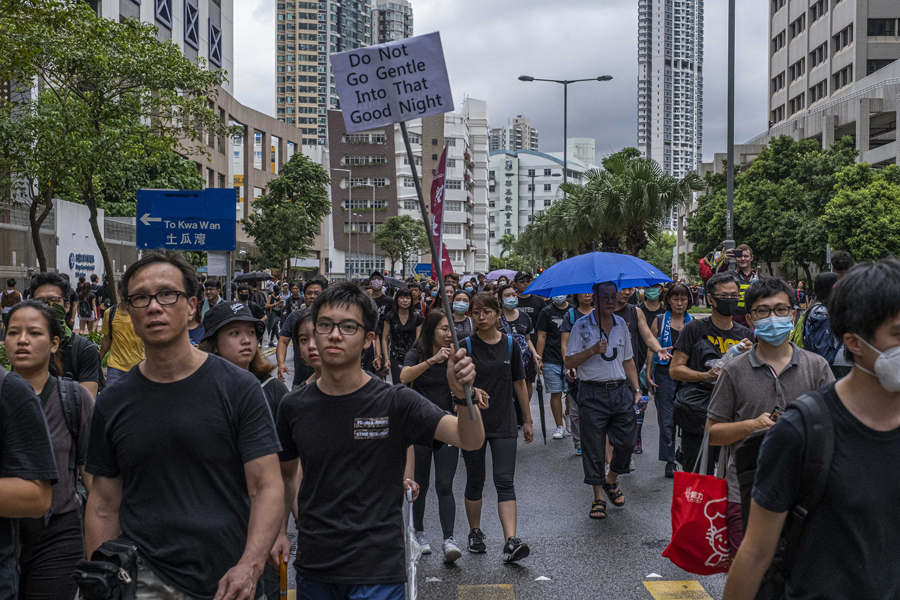 Demonstrators during a march in the Causeway Bay shopping district of Hong Kong on Sunday, Aug. 18, 2019. After days of violence and warnings from the Chinese government, organizers estimated at least 1.7 million people had turned out to march through the dense city center in the pouring rain on Sunday, making it the second- largest march of the protests. (Lam Yik Fei/The New York Times)

SAN FRANCISCO — China has adopted Russia’s playbook for spreading disinformation on Facebook and Twitter, deploying those tactics in its increasingly heated information war over the protests that have convulsed Hong Kong.

In recent weeks, Facebook and Twitter accounts that originated in China acted in a coordinated fashion to amplify messages and images that portrayed Hong Kong’s protesters as violent and extreme, the two social media companies said Monday. On Facebook, one recent post from a China-linked account likened the protesters to Islamic State fighters. And a Twitter message said, “We don’t want you radical people in Hong Kong. Just get out of here!”

Facebook and Twitter said they had removed the accounts, the first time that the social media companies have had to take down accounts linked to disinformation in China.

Facebook said it eliminated seven pages, three Facebook Groups and five accounts involved in the disinformation campaign about Hong Kong protesters. Twitter deleted 936 accounts and said it would ban state-backed media from promoting tweets after China Daily and other state-backed publications placed ads on its service that suggested the protesters were sponsored by Western interests and were becoming violent.

“These accounts were deliberately and specifically attempting to sow political discord in Hong Kong, including undermining the legitimacy and political positions of the protest movement on the ground,” Twitter said in a statement. “Based on our intensive investigations, we have reliable evidence to support that this is a coordinated state-backed operation.”

The removal of the China-backed accounts signal an escalation in the global disinformation wars. In 2015 and 2016, Russia pioneered disinformation techniques when it used Facebook, Twitter, Instagram and other social media to disseminate inflammatory messages intended to divide Americans in the 2016 presidential election. Since then, governments in many other countries have also used Facebook and Twitter to sow discord at home and abroad.

China has been less visible about using Facebook and Twitter to spread disinformation, researchers said. Both services are blocked in the country. The Communist Party has largely not needed Western social media because it already exerts tight control over state-backed media and content inside the country’s Great Firewall.