Protests have disrupted the city for months and have begun to disrupt the commerce that makes up its lifeblood. The offering had been expected to raise $10 billion to $15 billion 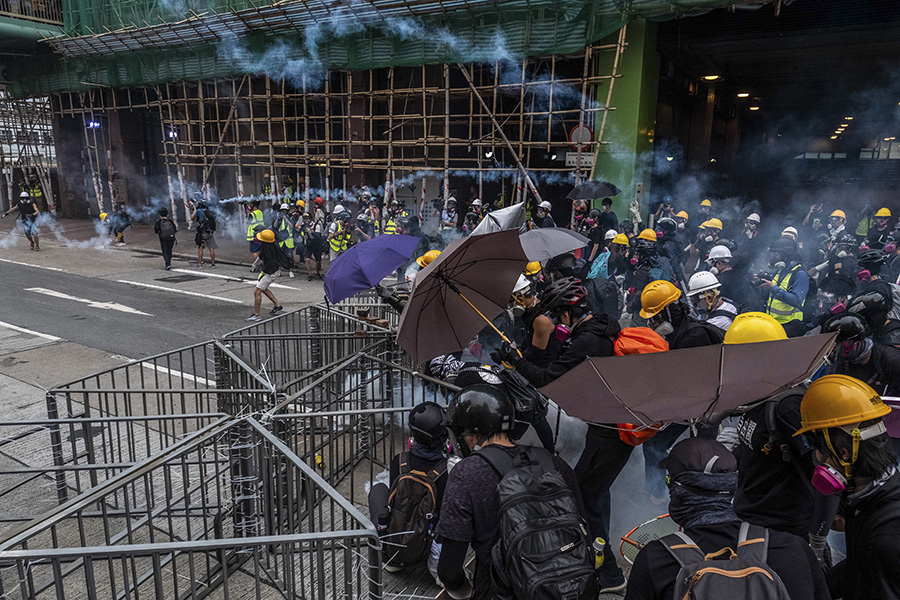 Demonstrators during clashes with police in Hong Kong, Aug. 11, 2019. Alibaba, the Chinese e-commerce giant, has postponed plans to list its shares on the Hong Kong Stock Exchange, according to two people briefed on the matter, as protests continue to rock the Asian financial capital. (Lam Yik Fei/The New York Times)

LONDON — Alibaba, the Chinese e-commerce giant, has postponed plans to list its shares on the Hong Kong Stock Exchange, according to two people briefed on the matter, as protests continue to rock the Asian financial capital.
The protests and the instability they created in Hong Kong’s stock market led to the postponement of the offering, which had been expected to take place later this month, according to these people. The offering had been expected to raise $10 billion to $15 billion, one person said. Protests have disrupted the city for months and have begun to disrupt the commerce that makes up its lifeblood. Many economists are now predicting its economy will shrink in coming months because of both the anti-government demonstrations and the worsening trade war between the United States and China. It is not clear when the company plans to stage the stock offering. A spokesman for Alibaba declined to comment on the plans, which were reported earlier by Reuters. Hong Kong’s business scene has been increasingly affected by the protesters, who are pushing back against China’s rule. The stock market has fallen about 9% since the end of June, as clashes between demonstrators and the police have grown increasingly violent and showed little sign of slowing down. Beijing has tried to use its economic sway to try to get the corporate world to back its hold on the territory. Last week, the chief executive of Cathay Pacific Airways, one of Hong Kong’s most successful global brands, said he would resign as the company came under increasing pressure from Chinese regulators and the country’s state-controlled news media. On Wednesday, Cathay Pacific said its planes were less full in July compared with a year ago, and it said it expects an even more significant impact in the coming months. Adding to signs of a traffic slowdown, Qantas, the Australian airline, said Thursday it would cut flight capacity to Hong Kong. China’s state-controlled news media has also pressured global accounting firms like PwC and Deloitte to keep their employees from participating in protests. Alibaba’s decision to postpone its offering did not stem from pressure from Chinese authorities, according to one of the people briefed on the company’s plans. A semiautonomous region of China, Hong Kong has long offered access to surging Chinese economic growth while granting the protections of a fiercely independent judiciary, wide freedom of expression, one of the world’s lowest urban crime rates and stable political leadership. Those factors have helped make Hong Kong one of the world’s favorite places to invest and raise money. Last year, Hong Kong-listed companies raised $69 billion from investors, according to the local exchange operator. In addition, it took steps last year to loosen rules for listing there. A decision by the city’s regulator to allow so-called dual class shares — which gives the founders of a tech company more power than ordinary shareholders — was seen as a broadly positive development for Beijing, which has been vocal about keeping its tech boom closer to home. Depending on the details, an Alibaba listing would further bolster that total. Five years ago, the Chinese e-commerce company became the world’s largest initial public offering, after raising $25 billion on the New York Stock Exchange. Last week, it reported strong, though slowing, results, demonstrating that it continues to prosper from urbanization and the rise of online retail in China despite the slowing economy there. The Hong Kong stock offering, which would supplement its existing American listing, would have been one of the biggest in Asia in recent years. It was widely expected to raise billions of dollars in fresh capital for the technology giant. But the demonstrations that have rocked Hong Kong since June have cast an unexpected pall over the potential offering by roiling the kind of stability that deal-makers crave. The unrest could last well past October. The Hong Kong government has shown little sign that it will acquiesce to the demands of demonstrators, who want universal suffrage in a political system now dominated by Beijing, the full abandonment of a bill that would allow criminal suspects to be extradited to the mainland and an investigation into the tactics of the police in trying to quell the protests. Hong Kong has also been hit by the trade war between the United States and China. Thanks to its relatively open borders with the rest of the world, Hong Kong serves as an essential trade conduit for many of China’s factories. Now, a growing number of economists are predicting the territory’s economy will shrink in the coming months. For all of Hong Kong’s problems, Alibaba has a number of reasons for sticking with its plan to list its shares there. A Hong Kong listing could play well with China’s leaders, who want to build the country’s stock markets so that the markets shed a reputation for corruption and insider trading and become a reliable way for companies to raise money. In the longer term, the Trump administration could take a tougher stance toward Chinese companies raising money in the United States, which could make Alibaba’s New York listing politically complicated.