Hong Kong considers the future: 'If you can afford it, leave' 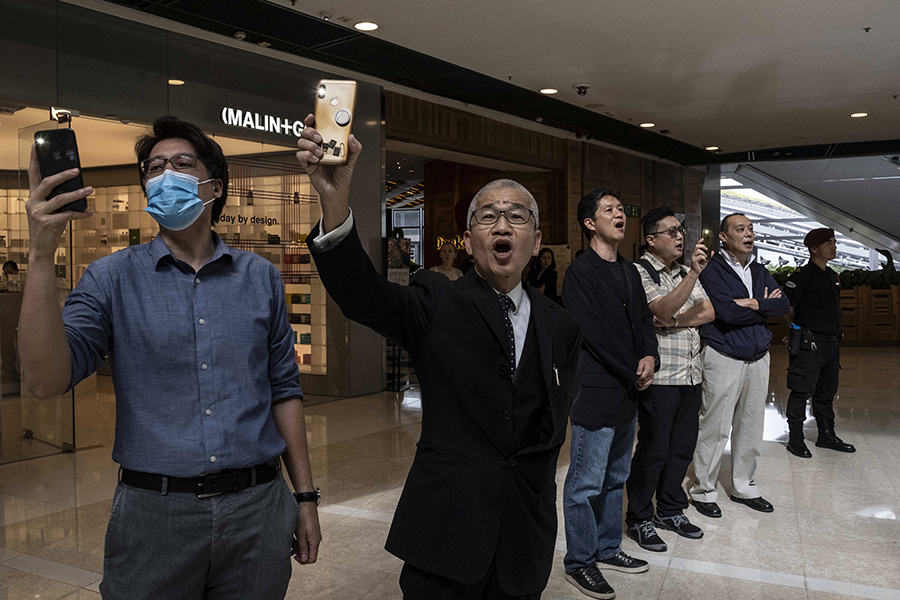 Gary Fung, center, a lawyer, joins a lunchtime protest at a Hong Kong mall on Nov. 24, 2019. Once pro-establishment, the spry 59-year-old barrister has begun to participate in protests and has been shocked at the police's behavior. (Lam Yik Fei/The New York Times)

On the news, he watches Hong Kong police beating demonstrators. He sees masked protesters vowing to fight on. He reads reports of the growing power of the Chinese Communist Party and its campaign to lock away Muslims.

Conspiracy sites whisper about disappearances and suicides. On the street, outside the gleaming office tower where Lam, 24, just started his career at a multinational company, he sees officers in riot armor lining the sidewalk and watching for trouble.

Lam wants to stay in Hong Kong. But he is saving his money. He is making plans. If he has to, he will leave.

“I don’t know how all of this conflict is going to end,” he said, “so my future, like Hong Kong’s future, is unpredictable.”

Months of political turmoil have turned Hong Kong from a city of possibilities into a place of doubt and disillusion. Peaceful demonstrations have turned violent. Its economy is shrinking. Yet China’s leaders seem as determined as ever to do away with the high degree of autonomy they once promised, threatening to put Hong Kong further under Beijing’s authoritarian control.

That reality has upended the lives of the city’s 7 million people. Plans to buy homes or have children have been put off. Families and friendships have been strained or broken.

And some — at least, those who have the option — wonder whether they should leave it all behind.

“Before this movement, things were already bad,” said Bessy Chan, a 45-year-old events manager, who is considering moving to Germany.

Chan, a Hong Kong native, was studying in Britain two decades ago when China took back the British colony after Beijing promised to preserve its freedoms and rule of law. She returned to Hong Kong, with hesitation, and found little had changed. Work kept her busy.

But the city’s high cost of living kept her from changing careers. She grew frustrated that Hong Kong officials devoted money to expensive but problem-plagued train and bridge projects that linked the city to the mainland instead of on affordable housing or education. She began to resent the crowds of mainland tourists.

This year, her sister’s husband got a job in Germany. Chan has begun to research graduate programs there. She is single, she reasoned, and the changing city has left her unmoored. Her parents, rather than mourning a family split, are happy about the move, she said.

Hong Kong’s future once looked bright. It benefited from China’s booming economy while maintaining its own system of laws. Its eventual absorption into the mainland, set to take place in 2047, seemed far away.

Soaring housing costs, fewer job opportunities and a rising income gap began to sully that image. But fewer people describe financial pressures as their main reason for wanting to leave the city these days, said Paul Yip, a professor and director at Hong Kong University whose studies show increased unhappiness and depression.

“Rather, they are talking about whether Hong Kong is a place where you want to raise your children,” Yip said. “That is more subtle and more serious.”

For those reasons, many residents have paused their life plans. Edmond Chan, a 29-year-old math teacher, and his girlfriend do not talk about getting married or starting a family anymore. They have discussed moving to Taiwan but cannot afford to.

Edmond Chan’s role has changed over the year from educator to counselor for students who cannot talk to their parents about the protests. He can no longer talk about the unrest with his own parents, who he says would rather not watch the news or discuss politics.

“We are very confused about how to teach a child that Hong Kong is a good place to live,” Edmond Chan said as he watched a recent lunchtime protest. When his own students come to him for guidance, he does not know what to say.

Official figures do not show whether more people are leaving Hong Kong than before, but the signs of interest are there. Applications for a certificate required to change citizenship have jumped by nearly three-quarters from a year ago, according to local data. Immigration consultants describe a flurry of requests for information. Flyers advertising investment-for-citizenship programs in other countries can be found in the lobbies of luxury apartment buildings.

Edward Suen, the 42-year-old owner of a marketing firm, is encouraging friends to explore that possibility, especially if they have children. “If you can afford it,” he said, “leave.”

Suen has vowed to stay and support the protests. He was galvanized after participating in Hong Kong’s first major street march this year, in June, which organizers said had drawn 1 million people. City leaders rejected their demands.

Days later, during a meeting on a work trip, Suen held his phone surreptitiously under the table and watched video of police officers firing tear gas at protesters surrounding Hong Kong’s legislative building.

“I almost cried in my meeting,” he said, “to see how the police were against all the peaceful protesters.”

Suen now spends weekends coordinating drivers who ferry protesters to and from demonstrations. He has built a network of volunteers. He tries to be optimistic.

“In Hong Kong, everyone wants to win the lottery,” Suen said. “We know we won’t win, so why do we keep buying tickets? Because we have hope.”

Gary Fung has chosen to stay as well. Once pro-establishment, the spry 59-year-old barrister began to participate in protests — “Only the legal demonstrations!” he said — and has been shocked at the police’s behavior.

“I saw many of them breaching the law,” Fung said.

He obtained a British passport in 1991 before the 1997 handover, but he chose to confront his fears of China instead. In 2007, he traveled to Tiananmen Square in Beijing and sat in quiet protest on the anniversary of the 1989 massacre. Now, he wants to fight to preserve Hong Kong’s legal autonomy.

“I’m proud of our legal system because of my background,” Fung said. “I want to turn it back.”

Protests have ebbed since November’s elections for district councils gave the pro-democracy movement a decisive victory. Still, tensions lurk in offices and homes. 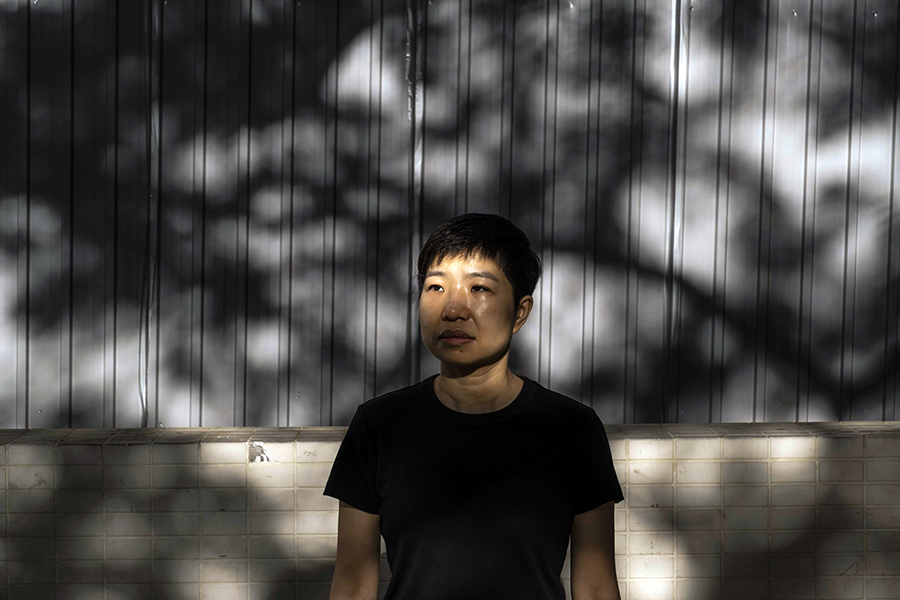 Carrie Lai in Hong Kong on Nov. 24, 2019. Lai has an Australian passport, but for now she plans to stay in Hong Kong. (Lam Yik Fei/The New York Times)

Carrie Lai, a 45-year-old events and public relations executive, has trouble avoiding shouting matches at family dinners. On the day of the elections, over appetizers, her brother-in-law suggested that one pro-democracy candidate had organized an attack against himself by hammer-wielding thugs to win sympathy. Lai froze, soup spoon suspended midair and face flushed, and opened her mouth to speak. Her sister-in-law jumped in and changed the subject.

“Everyone is on alert mode,” Lai said.

“It’s not that moment yet,” she said. If things get really bad, Lai said, her participation in protests could make a difference.

Lam is less certain he can change the future.

The son of a civil servant and a retail manager, Lam took all the right steps to climb Hong Kong’s social and economic ladders. He went to school abroad, in Manchester, England. He got a job as a recruiter at a prominent agency. He started dating someone seriously. His life in Hong Kong appeared to be set.

Now, he watches with dismay at Beijing’s increasing role in the city’s affairs. He fears the Communist Party will harness Hong Kong’s growth engine while squelching its culture.

“They want to use us,” he said, “but at the same time they want to change us.”

The protests at times have consumed Hong Kong’s central business district, where Lam works. During a recent lunchtime protest, he watched as an older man crossing the street was suddenly tackled by riot police officers. As the man was searched, a wailing police van arrived. Officers pushed the man inside. An older woman shouted that the man had done nothing wrong.

Lam consumes the news. He reads rumor sites and chat rooms and fires off links to acquaintances, even as he acknowledges that he does not know whether they are true.

Lam and his girlfriend discuss where they might go. She wants to go into a tourism-related business, a skill set that he reasons is portable. Japan comes up a lot in their talks. Britain, too.

Still, Lam doesn’t want to leave. At least, not yet.

“I love this place, and I wanted to develop my career here,” he said. “This is my home.”

Tweets by @forbes_india
Obesity and misconceptions: The biggest risk factors for hypertension
The best view comes after the hardest climb