China says it will allow couples to have 3 children, up from 2

The country's total fertility rate—an estimate of the number of children born over a woman's lifetime—now stands at 1.3, well below the replacement rate of 2.1, raising the possibility of a shrinking population over time 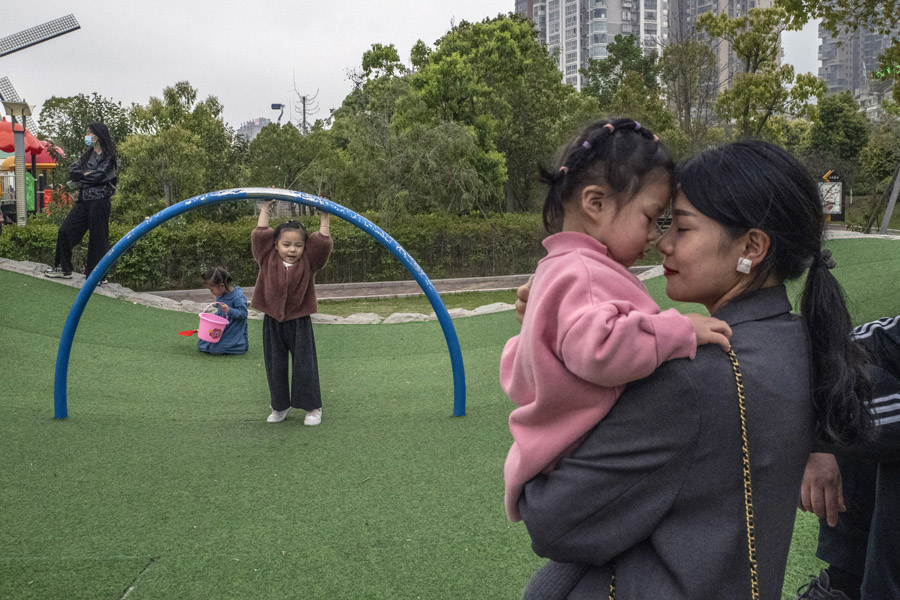 At a playground in Fujian, China, on March 30, 2021. The Chinese government’s efforts to increase the birthrate have been largely unsuccessful. (Gilles Sabrié/The New York Times)

China said Monday that it would allow all married couples to have three children, ending a two-child policy that has failed to raise the country’s declining birthrates and avert a demographic crisis.

The announcement by the ruling Communist Party represents an acknowledgment that its limits on reproduction, the world’s toughest, have jeopardized the country’s future. The labor pool is shrinking and the population is graying, threatening the industrial strategy that China has used for decades to emerge from poverty to become an economic powerhouse.

But it is far from clear that relaxing the policy further will pay off. People in China have responded coolly to the party’s earlier move, in 2016, to allow couples to have two children. To them, such measures do little to assuage their anxiety over the rising cost of education and of supporting aging parents, made worse by the lack of day care and the pervasive culture of long work hours.

In a nod to those concerns, the party also indicated Monday that it would improve maternity leave and workplace protections, pledging to make it easier for couples to have more children. But those protections are all but absent for single mothers in China, who despite the push for more children still lack access to benefits.

Births in China have fallen for four consecutive years, including in 2020, when the number of babies born dropped to the lowest since the era of former Communist Chairman Mao Zedong. The country’s total fertility rate — an estimate of the number of children born over a woman’s lifetime — now stands at 1.3, well below the replacement rate of 2.1, raising the possibility of a shrinking population over time.

The announcement Monday still splits the difference between individual reproductive rights and government limits over women’s bodies. Prominent voices within China have called on the party to scrap its restrictions on births altogether. But Beijing, under Xi Jinping, the party leader who has pushed for greater control in the daily lives of the country’s 1.4 billion people, has resisted.

“Opening it up to three children is far from enough,” said Huang Wenzheng, a demography expert with the Center for China and Globalization, a Beijing-based research center. “It should be fully liberalized, and giving birth should be strongly encouraged.”

“This should be regarded as a crisis for the survival of the Chinese nation, even beyond the pandemic and other environmental issues,” Huang added. “There should never have been a birth restriction policy in the first place. So it’s not a question of whether this is too late.”

The party made the announcement after a meeting by the Politburo, a top decision-making body, although it was not immediately clear when the change would take effect. In an acknowledgment that raising the birth limits might not be enough, the party also pledged to beef up support for families, though it did not provide details.

China’s family planning restrictions date to 1980, when the party first imposed a “one-child” policy to slow population growth and bolster the economic boom that was then just beginning. Officials often employed brutal tactics as they forced women to get abortions or be sterilized, and the policy soon became a source of public discontent.

In 2013, as Chinese officials began to understand the implications of the country’s aging population, the government allowed parents who were from one-child families to have two children themselves. Two years later, the limit was raised to two children for everyone.

The chorus of voices urging the party to do more has only grown in recent years. The central bank said in a starkly worded paper in April that the government could not afford to keep restricting procreation. Already, some local officials in some areas had been tacitly allowing couples to have three children.

But more couples now embrace the concept that one child is enough, a cultural shift that has dragged down birthrates. And some say they are not interested in children at all, even after the latest announcement.

“No matter how many babies they open it up to, I’m not going to have any because children are too troublesome and expensive,” said Li Shan, 26, a product manager at an internet company in Beijing. “I’m impatient and worried that I won’t be able to educate the child well.”

The party’s announcement was unlikely to change China’s demographic trends.

“The decision-makers have probably realized that the population situation is relatively severe,” said He Yafu, an independent demographer based in the southern Chinese city of Zhanjiang. “But merely opening up the policy to three children and not encouraging births as a whole, I don’t think there will be a significant increase in the fertility rate. Many people don’t want to have a second child, let alone a third child.”

Still, the news was met with relief by some women who already had a third child but had been wary of being punished for flouting the rules.

“My mobile phone almost fell to the ground,” said Yolanda Ouyang, 39, an employee at a state-owned enterprise in the region of Guangxi who had kept her third child hidden for two years because she feared that she would be fired.

“I’m so happy and so shocked,” Ouyang said. “Finally, my child can come outside and play out in the open.”