Delhi reopens a crack amid gloomy economic forecast for India

On Monday, India released a new set of numbers that showed the country's economy grew by 1.6% for the three-month period ending in March 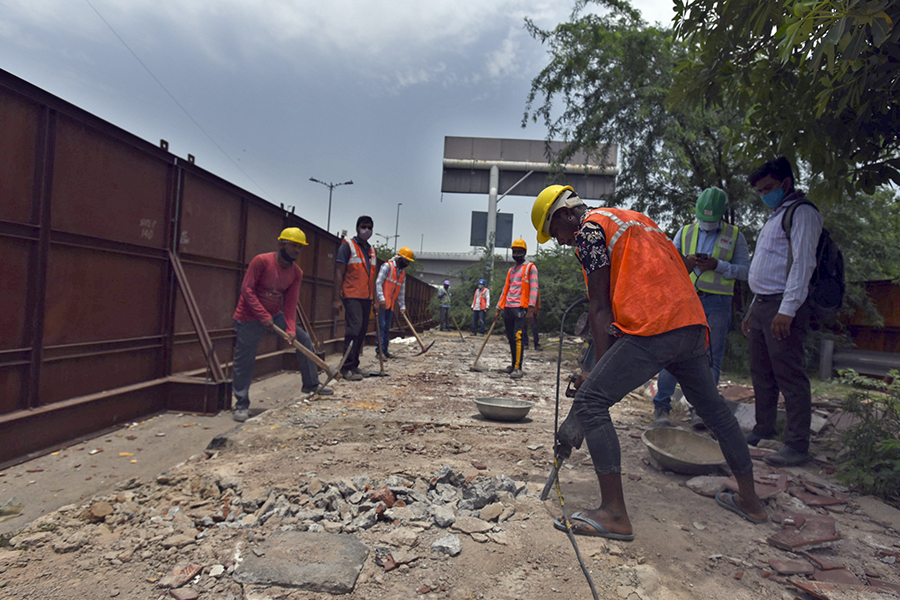 NEW DELHI, INDIA - MAY 31: Labourers working at a constrution site following Covid-19 protocols, near Barapula flyover  on May 31, 2021 in New Delhi, India.  Delhis factories and manufacturing units reopened on Monday as the Delhi government gradually lifts lockdown restrictions that have been in place since April 20. According to the Delhi governments guidelines for the unlock process, manufacturing and constructions units have been allowed to resume work with staggered working hours to maintain social distancing.
Image: Raj K Raj/Hindustan Times via Getty Images

Delhi is considering relaxing its COVID-19 restrictions six weeks after a devastating coronavirus surge rocked the Indian capital, with a pledge to ramp up vaccinations to protect the city’s more than 20 million people from another wave.

But the vow came after a weekend in which city officials were forced to close vaccination centers for lack of supply, a problem plaguing the entire country as the coronavirus continues to spread. India does not have the vaccine manufacturing capacity to inoculate a big portion of its population anytime soon, while the prospect of importing new supplies from abroad has bogged down amid squabbling between the central and local governments.

As a result, any decision to lift coronavirus restrictions could be a mistake if the government allows large maskless gatherings to take place as it did before.

“The only answer is vaccination,” said Anand Krishnan, a professor of community medicine at the All India Institute of Medical Sciences in New Delhi.

“The risk will be there,” he said. “We need to continue to follow all precautions, including double-masking, avoiding crowds and gatherings of any kind, be it social, religious or political."

Delhi’s chief minister, Arvind Kejriwal, announced Sunday that the city will start “unlocking” gradually next week if cases continue to fall, while acknowledging a “severe shortage” of vaccines.

“Our top priority is to get everyone vaccinated,” Kejriwal said at a news conference. “If everyone gets vaccinated, maybe we will be spared of the third wave."

The chief minister did not detail what limits would be lifted. Currently, all businesses, except essential services like food deliveries and pharmacies, are closed. Movement is limited and public transportation has been shut down, although people can travel in private cars and buses. The limits apply to the Delhi region, which includes the New Delhi central district where major government offices are based.

Kejriwal’s comments follow a sharp drop in infections and deaths in Delhi, at least by official figures. On Monday, Delhi reported 1,649 new infections and 189 deaths. Those figures represent a steep decline from the nearly 30,000 new cases in mid-April, although they also show that coronavirus infections remain a lingering threat.

Nationwide, India on Monday passed 300,000 COVID-19 deaths and registered 222,315 new infections, the country’s health ministry reported. While India’s total of 26.8 million infections still lags behind the United States, with more than 33 million, the U.S. government has rolled out a wide vaccination campaign that has sent new infections plummeting. Only about 3% of India’s population has received two doses.

Experts also widely caution that India’s official numbers severely undercount new infections and deaths because of a lack of testing and other resources in a developing country of 1.4 billion people.

Officials across India face pressure to reopen their local economies. Factory workers and members of the country’s vast, informal workforce of shopkeepers and countless others cannot work from home and are anxious to restart their lives.

A lack of vaccines around the country is hindering that push. Nearly three weeks after Prime Minister Narendra Modi’s government expanded India’s vaccination program to all adults, the campaign has come to an abrupt end in Delhi.

The public schools and stadiums in Delhi where thousands stood in line for hours for a coronavirus vaccine were closed down over the weekend as the city ran out of doses for its large, young population.

Kejriwal said that his government was ready to spend all the money it needed to arrange 8 million doses per month over the next three months, — enough to vaccinate all adults in Delhi — both from the central government and directly from major manufacturers.

Delhi’s experience, however, could be similar to that of other Indian states searching for doses at a time when vaccines are in short supply around the world.

A senior official in the state of Punjab told the local news media Sunday that Moderna, the U.S. vaccine-maker, had rejected its purchase request, saying the company would sell only to national governments. The company did not immediately respond to an emailed request for comment.

State governments — particularly those controlled by political factions opposed to Modi’s Bharatiya Janata Party — have been clashing with the Modi administration over vaccines and other issues, saying the central government had left them to fend for themselves.

India has lagged behind other countries in signing advance purchase agreements to buy vaccines in bulk. Experts have criticized Modi and his government for the delays.

Tweets by @forbes_india
China says it will allow couples to have 3 children, up from 2
News By Numbers: India's GDP contracts for the first time in 40 years, sharpest since 1950s