The prospects for a far-reaching new deal this year are slim, with the Biden administration drafting a comprehensive strategy toward China, a complex interagency procedure that could last into early next year 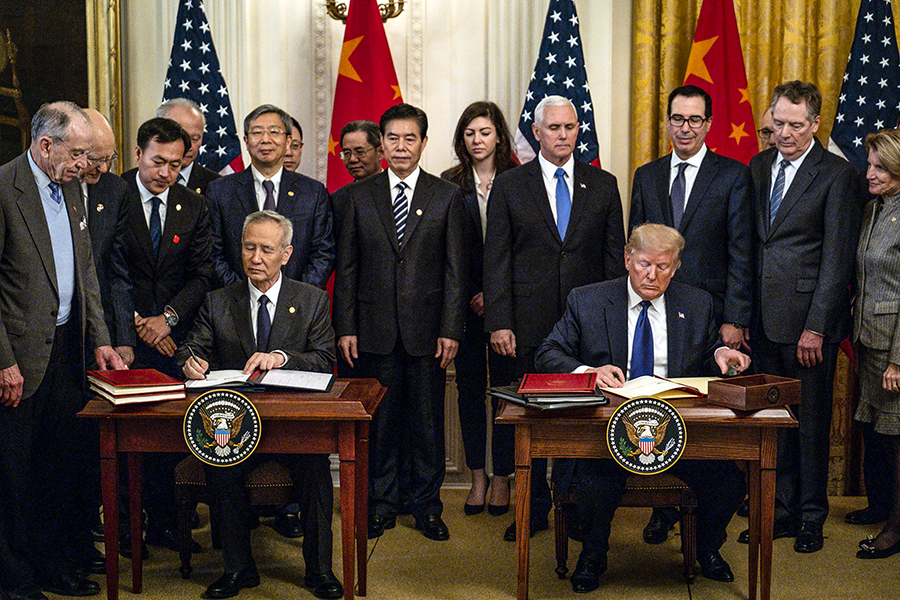 SHANGHAI — Just days before the coronavirus shut down the Chinese city of Wuhan and changed the world, the Trump administration and China signed what both sides said would be only a temporary truce in their 18-month trade war.
Since then, the pandemic has scrambled global priorities, international commerce has stalled and surged again, and President Joe Biden has taken office. But the truce endures — and now appears to be setting new, lasting ground rules for global trade.
The agreement did not stop many of the same practices that sparked the trade war, the biggest in history. It does nothing to prevent China from throwing huge subsidies at a range of industries — from electric cars to jetliners to computer chips — that could shape the future but for which the country often relies heavily on U.S. technology.
In return, the truce left in place most of the tariffs that the Trump administration imposed on $360 billion a year in Chinese-made goods, many of them subsidized. Such unilateral moves run counter to the spirit of the rules of global trade, which were set up to stop nations from starting economic conflicts on their own and to keep them from spiraling out of control.
But the new model seems to be catching on. The European Union announced May 5 that it was drafting legislation that would allow it to broadly penalize imports and investments from subsidized industries overseas. EU officials, who had initially looked askance at the U.S.-China truce, said their policy was not aimed specifically at China. But trade experts were quick to note that no other exporter has the scale of manufacturing and breadth of subsidies that China has.
“You see a real appetite in the U.S. but also in the EU for unilateral measures,” said Timothy Meyer, a former State Department lawyer who is now a professor at Vanderbilt Law School.
The truce, known as the Phase 1 agreement, could still be supplanted by a new deal. The agreement requires that the two sides conduct a high-level review of it this summer. On Wednesday in Washington, Katherine Tai, the U.S. trade representative, held an introductory call with a senior Chinese official, Vice Premier Liu He — a signal that Liu, the same top negotiator who squared off against the Trump administration, will be kept in place by China.
But prospects for a far-reaching new deal this year are slim. The Biden administration is drafting a comprehensive strategy toward China, a complex interagency procedure that could last into early next year. It has also shown little appetite for easing up on China’s trade practices, and it has publicly discussed smoothing ties with European and other allies that were ruffled by other disputes during the Trump administration.
“We welcome the competition,” Tai told lawmakers earlier this month. “But the competition must be fair, and if China cannot or will not adapt to international rules and norms, we must be bold and creative in taking steps to level the playing field and enhance our own capabilities and partnerships.”
On the Chinese side, Beijing will not budge on the issue of subsidies, said people familiar with both countries’ positions who insisted on anonymity because they were not authorized to discuss the matter publicly. Apart from numerous demands that the United States simply abandon its tariffs, China has not even made a proposal to revamp the agreement, they said, because Chinese officials do not want to discuss subsidy limits.
If that intransigence lasts, Phase 1 could keep setting trade rules for years to come.
Although a few provisions expire at the end of the year, the agreement includes permanent requirements, such as that China stop forcing foreign companies to transfer technology to Chinese firms as a condition of doing business there. An obscure clause also calls for China to buy rising amounts of U.S. goods through 2025.
That could set the stage for more narrowly targeted talks, including about whether China has lived up to the agreement's annual purchase targets. The two sides might also discuss the solar industry, which sparked previous trade spats between them but could get a new look as the Biden administration emphasizes climate change.
On its face, the Phase 1 trade agreement has fallen short of the Trump administration’s goals. The administration had hoped negotiations would even out the huge trade imbalance between the two countries and rein in Chinese subsidies, which U.S. companies and officials see as creating huge, state-funded competitors to U.S. industries.
Instead, the U.S. trade deficit with China grew by nearly half again, to $78.6 billion, in the first three months of this year compared with a year earlier, fueled by pandemic purchases like consumer electronics, exercise equipment and other goods made mainly in China.
But China’s imports from the United States have been catching up since bad weather and a deadly pig disease sharpened China’s appetite for U.S.-grown food. He Weiwen, a retired Commerce Ministry official who is now an executive director of the China Association of International Trade in Beijing, said that China had made a sincere effort to meet its pledges.
“China is not violating that Phase 1 agreement,” he said.
Over the long term, the Phase 1 deal could cement the U.S.' approach of using tariffs to offset China’s drive to retool and upgrade its economy through lavish subsidies.
The Trump administration tried during the trade war to persuade China to renounce subsidies for its exporters, which include cheap land for factories and huge loans to manufacturers at below-market interest rates. The Biden administration plans extensive subsidies as well, but those are aimed mostly at research and development, a category of subsidies that seldom violates international trade rules.

Tweets by @forbesindia
US is said to have unexamined intel to pore over on virus's origin
Food and education: How an NGO is helping in the battle against hunger and illiteracy