Food and education: How an NGO is helping in the battle against hunger and illiteracy

Gurugram-based Vishalakshi Foundation has distributed 40,000 food, milk and ration packets to migrant workers and needy families since the first wave of Covid-19 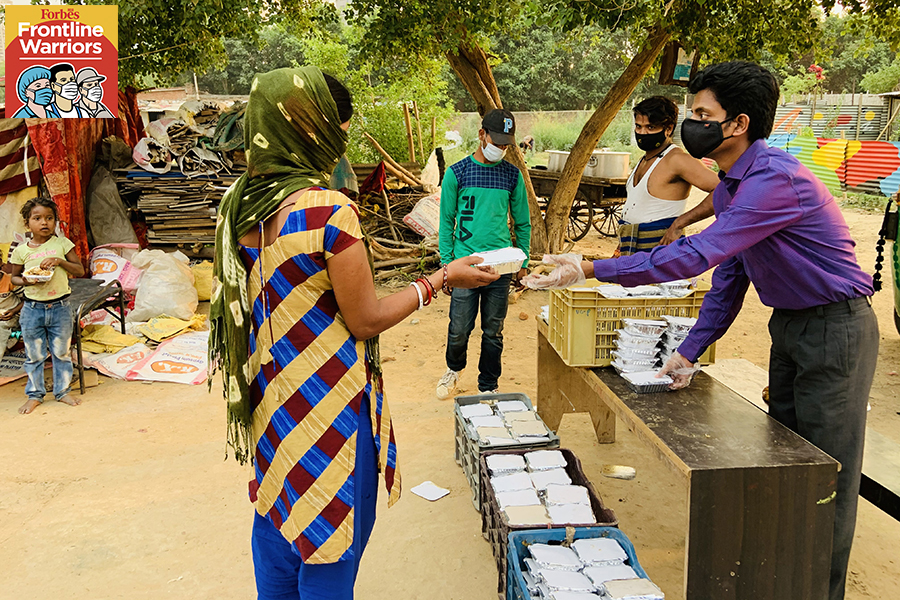 Before the Covid-19 pandemic struck, Nilay Agarwal was fighting another pandemic. Through an initiative called Project Hunger, his NGO Vishalakshi Foundation, founded in 2019, had been distributing food and milk packets to homeless and underprivileged people. In a country where 7,000 people die of malnutrition and hunger every day, of which 3,000 are children, says 28-year-old Agarwal, it’s concerning that this problem has not been declared a pandemic. “The only vaccine we need for this pandemic is food. How difficult can it be for us to come together and eradicate this problem?” he says.
As the Covid-19 pandemic struck, the NGO reacted quickly. In the first wave, Agarwal and his team of 1,000 people, comprising young professionals and students below 35, distributed 25,000 food packets among migrant labourers. Today, the team has grown to 3,000 people and is spread across Lucknow, Fatehpur, Banda, Amroha, Gurugram, New Delhi, Ranchi, Noida, and Jaipur.
In the past month, since April 25, they have managed to distribute 500 food and milk packets each day to the unemployed, children, and needy families in Gurugram, Lucknow and Ranchi. “I feel ashamed when people as old as my grandparents come and touch my feet to thank me for the food I distribute,” he says.
They have also been helping with medical requirements. “This year, everyone’s focus has been on oxygen cylinders, plasma, beds and medicines,” he says. “Our team sat up nights verifying leads. We had someone call us at 3am to tell us if we don’t help, they’ll be forced to commit suicide. In a second our whole team was up and arranged for an ambulance and a bed,” he recalls. 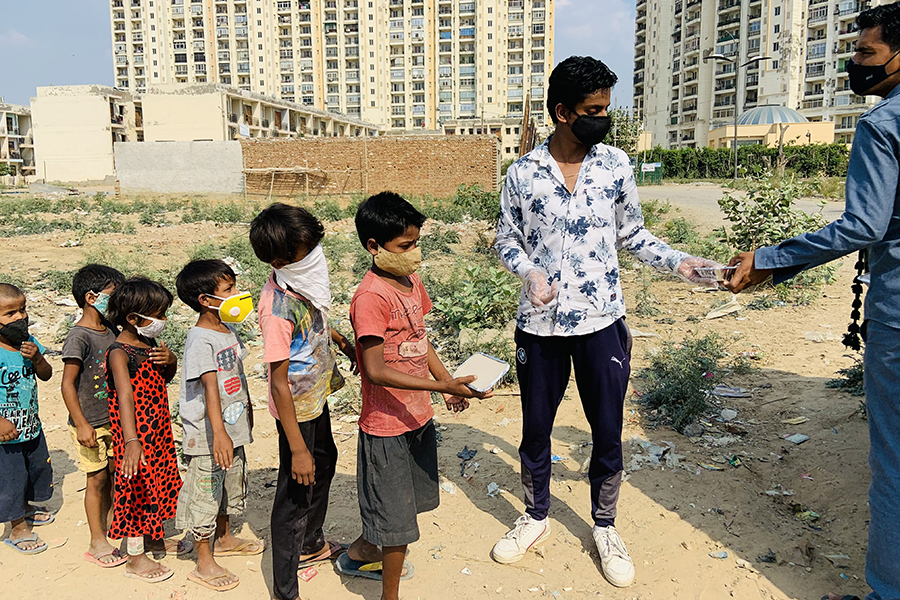 In the second wave, Vishalakshi Foundation has distributed 15,000 food packets so far
Though food remains the focus, the NGO has also taken the initiative to educate children. On a drive to distribute food in a Gurugram slum last year, Agarwal noticed children playing and asked them if they had ever been to school. He learnt they had never attended one. “I was shocked. It was evident that even when the lockdown gets lifted, they’ll never go to school,” he says.
Agarwal adopted the slum in June 2020 and named it ‘Dream Slum’ with an aim to create an environment where people would love to stay and a place where their dreams will get wings. They created a school, called Dream School, which has 52 children. With help in the form of contributions and volunteers, in a span of two months the NGO was able to arrange for books, teachers, uniforms, furniture and other facilities for the school. “We even painted the school ourselves, as well as created a garden,” says Agarwal.
Since then, they’ve created three more schools, so that there are two each in Gurugram and Lucknow helping educate 300 children for free. The fifth school, near Delhi’s Kashmiri Gate, is in the works and will open once the lockdown is lifted.
“As of now, the schools are shut and we’ve not been able to run online classes because we are very new in this field. We don’t have the resources to do so,” he says. “But I meet my children every day when I go to distribute food so I make it a point to motivate them and remind them to study what they’ve been taught,” he adds.
In addition to this, Vishalakshi has also promised to pay the fees, up to grade 12, for five children studying in private schools whose families have lost their earning member.
Agarwal, who works from 7.30 in the morning to 4.30 in the evening as an ontologist with software development firm GlobalLogic, has only a few hours a day to devote to his NGO. He starts around 5 am, procuring milk packets and distributing them before his shift. During his lunch break, he helps a friend with packing rations and attends to calls related to the NGO. Soon after his shift, he steps out to distribute cooked meals and ration packets.
Agarwal makes sure his entire procurement helps empower people. “The idea is to uplift and empower people. Even the meals are cooked by the people of the slum and they get paid in return,” he says. “The idea behind Dream Slum is to make people completely self-sustainable. We want to create job opportunities for them by engaging them in different activities,” he adds. So besides learning how to cook, these slum-dwellers also make mats, and paint.
Agarwal, who founded and named the NGO in honour of a friend who died in an accident in 2018, says his efforts are just a drop in the ocean. “The people we feed don’t have dreams like owning a house, a car or jewellery. All they want is two square meals for themselves and their children. If they struggle during normal times, you can imagine their struggle in this lockdown period. I’m doing this because I don’t want to see anyone die of hunger,” he says.

Tweets by @forbesindia
A temporary US-China trade truce starts to look durable
Photo of the Day: 'It's a century!'