The vaccines may well continue to ward off severe illness and death, although booster doses may be needed to protect most people 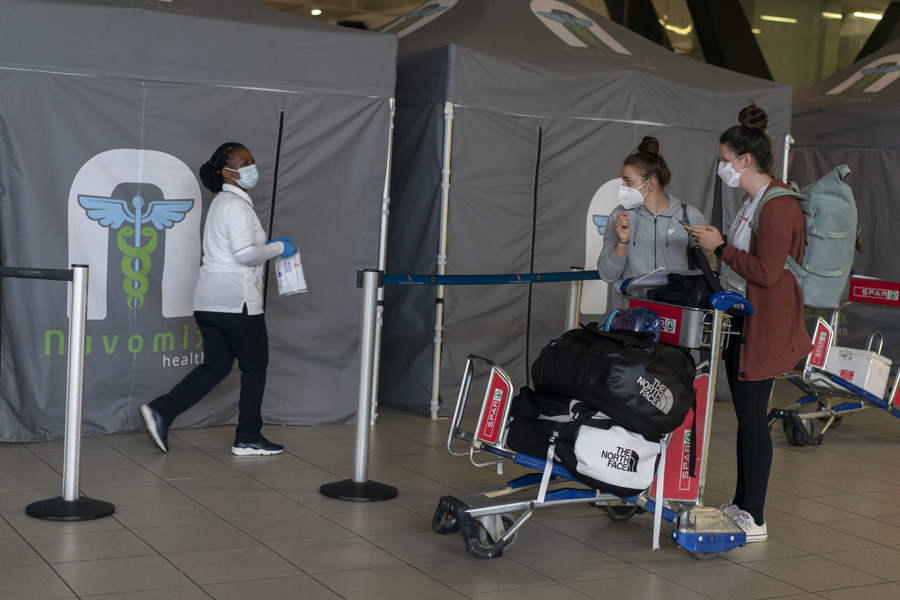 International travelers wait to take PCR tests upon arriving at the O.R. Tambo International airport in Johannesburg, Nov. 27, 2021. One nation after another shut its doors to southern Africa over the weekend, even as they spurned public health measures that scientists said were far more urgently needed to take on the omicron variant of COVID. (Joao Silva/The New York Times)

As nations severed air links from southern Africa amid fears of another global surge of the coronavirus, scientists scrambled Sunday to gather data on the new omicron variant, its capabilities and — perhaps most important — how effectively the current vaccines will protect against it.

The early findings are a mixed picture. The variant may be more transmissible and better able to evade the body’s immune responses, both to vaccination and to natural infection, than prior versions of the virus, experts said in interviews.

The vaccines may well continue to ward off severe illness and death, although booster doses may be needed to protect most people. Still, the makers of the two most effective vaccines, Pfizer-BioNTech and Moderna, are preparing to reformulate their shots if necessary.

“We really need to be vigilant about this new variant and preparing for it,” said Jesse Bloom, an evolutionary biologist at the Fred Hutchinson Cancer Research Center in Seattle.

“Probably in a few weeks, we’ll have a better sense of how much this variant is spreading and how necessary it might be to push forward with a variant vaccine,” Bloom said.

Even as scientists began vigorous scrutiny of the new variant, countries around the world curtailed travel to and from nations in southern Africa, where omicron was first identified. Despite the restrictions, the virus has been found in a half-dozen European countries, including the United Kingdom, as well as Australia, Israel and Hong Kong.

Already, omicron accounts for most of the 2,300 new daily cases in the province of Gauteng, South Africa, President Cyril Ramaphosa announced Sunday. Nationally, new infections have more than tripled in the past week, and test positivity has increased to 9% from 2%.

Scientists have reacted more quickly to omicron than to any other variant. In just 36 hours from the first signs of trouble in South Africa on Tuesday, researchers analyzed samples from 100 infected patients, collated the data and alerted the world, said Tulio de Oliveira, a geneticist at the Nelson R. Mandela School of Medicine in Durban.

Within an hour of the first alarm, scientists in South Africa also rushed to test coronavirus vaccines against the new variant. Now, dozens of teams worldwide — including researchers at Pfizer-BioNTech and Moderna — have joined the chase.

They won’t know the results for two weeks, at the earliest. But the mutations that omicron carries suggest that the vaccines most likely will be less effective, to some unknown degree, than they were against any previous variant.

“Based on lots of work people have done on other variants and other mutations, we can be pretty confident these mutations are going to cause an appreciable drop in antibody neutralization,” Bloom said, referring to the body’s ability to attack an invading virus.

South African doctors are seeing an increase in reinfections in people who already had a bout of COVID-19, suggesting that the variant can overcome natural immunity, said Dr. Richard Lessells, an infectious diseases physician at the University of KwaZulu-Natal.

Omicron has about 50 mutations, including more than 30 in the spike, a viral protein on its surface that the vaccines train the body to recognize and attack.

Some of these mutations have been seen before. Some were thought to have powered the beta variant’s ability to sidestep vaccines, while others most likely turbocharged delta’s extreme contagiousness.

“My best guess is that this combines both of those elements,” Penny Moore, a virus expert at the National Institute for Communicable Diseases in South Africa, said of the new variant.

Moore’s team is perhaps the furthest along in testing how well the vaccines hold up against omicron. She and her colleagues are preparing to test blood from fully immunized people against a synthetic version of the omicron variant.

Creating such a “pseudovirus” — a viral stand-in that contains all of the mutations — takes time, but results may be available in about 10 days.

To more closely mimic what people are likely to encounter, another team led by Alex Sigal, a virus expert at the Africa Health Research Institute, is growing live Omicron, which will be tested against the blood of fully immunized people, as well as those who were previously infected.

Those results may take longer but should provide a fuller picture of the vaccines’ performance, Sigal said.

If the vaccines prove to be much less potent against omicron, they may need to be tweaked to enhance their effectiveness. Preparing for the worst, Moderna, Pfizer-BioNTech and Johnson & Johnson are planning to test an artificial version of omicron against their vaccines.

The mRNA vaccines in particular — Moderna’s and Pfizer-BioNTech’s — were built with technology that should permit rapid modification. Pfizer’s scientists “can adapt the current vaccine within six weeks and ship initial batches within 100 days in the event of an escape variant” that eludes the immune system, said Jerica Pitts, a spokeswoman for Pfizer.

Moderna’s work began Tuesday, immediately after its scientists learned of omicron — the fastest the company has ever responded to a variant, said Dr. Stephen Hoge, Moderna’s president.

Even without data on omicron’s spread, it was obvious the variant would be a formidable threat to vaccines, he said.

“This thing is a Frankenstein mix of all of the greatest hits,” Hoge said, referring to the variant’s many concerning mutations. “It just triggered every one of our alarm bells.”

Moderna could update its current vaccine in about two months and have clinical results in about three months if necessary, he said.

Both companies also plan to test whether booster shots will bolster the immune system enough to fend off the new variant. Boosters of the Pfizer-BioNTech and Moderna vaccines have been shown to raise antibody levels significantly.

But those antibodies may not be broadly effective against every iteration of the virus and may not be enough to neutralize omicron entirely, said Michel Nussenzweig, an immunologist at Rockefeller University in New York.

Nussenzweig and his colleagues are preparing to test omicron against the mRNA vaccines, as well as the vaccines made by Johnson & Johnson and AstraZeneca. They hope to have results within a month.

Omicron-specific vaccines created in just weeks would be a miraculous feat. But the prospect of producing and distributing them raises daunting questions.

If new versions are required to protect people everywhere, companies should make them available to the African countries that most need them and can least afford them, de Oliveira said.

“South Africa at least has managed to procure their own vaccines,” he said. But poorer countries like Sudan, Mozambique, Eswatini and Lesotho will need low-cost options.

Pfizer did not respond to a question about low-cost vaccines for African nations. Hoge, of Moderna, said the company already had an agreement with the African Union to deliver 110 million doses at $3.50 per half dose of vaccine.

Researchers everywhere want to avoid drawing conclusions prematurely, a mistake they made when the beta variant surfaced. Preliminary tests of that variant took only one known mutation into account and underestimated its ability to evade the immune system, Moore recalled. (Fortunately, the variant also turned out to be less contagious.)

To get a full picture of the effectiveness of the vaccines against omicron, scientists must look not just at antibody levels but also at immune cells that can recognize and destroy infected cells. Immune cells called T cells are crucial for preventing an infection from progressing to serious illness and death.

Some of omicron’s mutations occur in parts of the virus targeted by T cells, meaning the variant may be more difficult for T cells to recognize.

Already, a computer simulation has predicted that those mutations may alter about six of the hundreds of regions that T cells can recognize, said Wendy Burgers, an immunologist at the University of Cape Town.

That may not seem like much. But people make varying sets of T cells, so depending on which targets the mutations knock out, some people may barely be affected by omicron — and others may be left vulnerable.

Burgers is hoping to obtain blood from 50 people infected with the variant to gauge how the mutations will play out across a population. Once the samples are in hand, results will be available after “probably a week of very late nights and analysis,” she said.

Tweets by @forbesindia
Photo Of The Day: Smoggy morning
As China speeds up nuclear arms race, the US wants to talk