In the past two days, scientists detected the B1.1.529 variant after observing an increase in infections in South Africa's economic hub surrounding Johannesburg and so far, 22 positive cases have been identified in the country 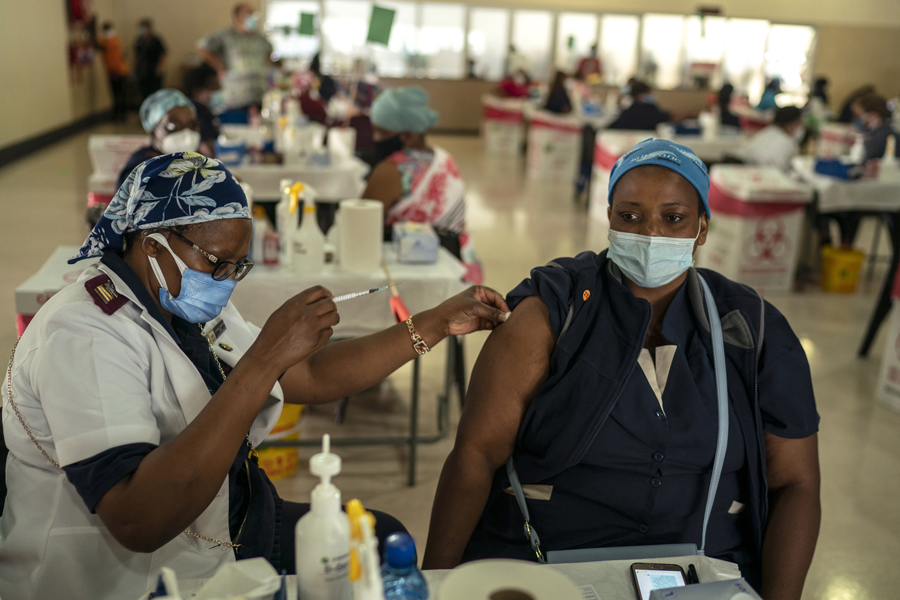 A health care worker is given the Johnson & Johnson COVID-19 vaccine at an assembly hall on the grounds of Charlotte Maxeke Johannesburg Academic Hospital in Johannesburg, South Africa, March 5, 2021. A concerning new variant of the coronavirus, whose mutations evidence a “big jump in evolution,” is driving a spike in new COVID-19 infections in South Africa, scientists said on Thursday, Nov. 25. (Joao Silva/The New York Times)

JOHANNESBURG — Scientists in South Africa identified on Thursday a concerning new variant of the coronavirus, whose mutations mark a “big jump in evolution” that is driving a spike in new cases. Hours later, Britain banned flights from six southern African nations citing the variant.

Since the onset of the pandemic, a number of variants have emerged. One underlying concern about new variants is whether they will stymie progress against the pandemic or whether they will limit the effectiveness of vaccines. South African scientists will meet with the World Health Organization technical team Friday, where authorities will assign a letter of the Greek alphabet to this variant.

By Thursday evening, Britain had banned flights from South Africa, Botwsana, Eswatini, Lesotho, Namibia and Zimbabwe starting at noon local time Friday. The six nations will be added to the country’s red list, which would require British travelers coming from those nations to quarantine on arrival.

In December 2020, South Africa was the first nation to report the appearance of the beta variant, which has now spread to nearly 70 countries. Scientists have been concerned that some clinical trials have shown that vaccines offer less protection against the beta variant. Since then, the more virulent and aggressive delta variant has spread all over the world and is believed to be fueling the latest surge in cases.

Britain had only just weeks ago announced that it would stop requiring any travelers to quarantine in government-designated hotels, removing the last seven countries from its “red list” for coronavirus risk. Instead, now, governments across Europe are moving quickly to shore up the progress made against the pandemic that is being threatened by the latest wave of new cases.

The variant has also been identified in Botswana. The country’s health ministry confirmed in a statement that four cases of the new variant were detected in people who were all fully vaccinated. All four were tested before their planned travel.

With over 1,200 new infections, South Africa’s daily infection rate is much lower than in Germany, where new cases are driving a wave. However, the density of mutations on this new variant raises fears that it could be highly contagious, leading scientists to sound the alarm early.

“This variant did surprise us, it has a big jump in evolution, many more mutations than we expected, especially after a very severe third wave of delta,” said Tulio de Oliveira, director of the KwaZulu-Natal Research and Innovation Sequencing Platform.

Displaying mutations that might resist neutralization, scientists are also still unclear how effective existing vaccines will be against the new variant. The variant shares similarities with the lambda and beta variants, which are associated with an innate evasion of immunity, said Richard Lessells, an infectious diseases specialist at the KwaZulu-Natal Research and Innovation Sequencing Platform.

“All these things are what give us some concern that this variant might have not just enhanced transmissibility, so spread more efficiently, but might also be able to get around parts of the immune system and the protection we have in our immune system,” Lessells said.

The new variant has largely been detected among young people, the cohort that also has the lowest vaccination rate in South Africa. Just over a quarter of those ages between 18 and 34 are vaccinated, said Dr. Joe Phaahla, the country’s minister of health.

While cases of the new variant are mainly concentrated in the country’s economic hub, particularly in the capital Pretoria, it is “only a matter of time” before the virus spreads across the country as schools close and families prepare to travel for the holiday season, Phaahla said.